Today, we're spreading the BUZZ for a title getting ready to celebrate its BOOK BIRTHDAY this Tuesday via Disney Hyperion!  It's the first title in a planned series that falls squarely in the Middle Grade Fantasy realm of things, but trust me when I say, this is no adventure simply meant for the kiddos.  What...are you second guessing my assessment?  Well then, guess I'll have to persuade you a bit more. 😉  Ladies and gents, please join me front and center for a magical tale you won't soon forget!  Today's book of choice is... 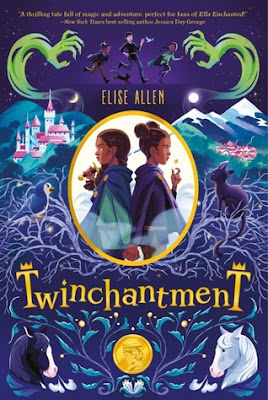 About the book...
"Y-y-y-you," he stammered, and Flissa turned to see he'd gone ashen. "T-t-t-two of you!"
Uh-oh. Flissa reached up and checked. Sure enough, her hood had fallen off. Their secret was out.
Princesses Flissa and Sara are even closer than most twins. In fact, most of the kingdom thinks they're the same person.

When magic was outlawed in Kaloon generations ago, twins, black cats, and other potentially -magical beings were outlawed, too. Since they were born, Flissa and Sara have pretended to be one princess, Flissara, trading off royal duties like attending glamorous balls, participating in fencing exhibitions, and making friends with other young nobles, all while hiding in plain sight.

But when the first magical attack in years puts their mother's life in danger, the girls must break the rules that have protected them to save her. Enlisting a brave servant boy and his plucky black kitten as their guides, they set off on an epic quest to the Twists-a forbidden place full of dark magic-to find the evil mage who cursed the queen. With a case of mistaken identity, a wickedly powerful exile out for vengeance, and time running out for their mother, the twins might just need to make their own magic to save the day. 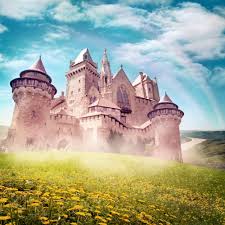 Once upon a time in a kingdom far away, a royal family ruled in fairness and light...until one day they were betrayed by the very magic they held dear, leaving them a scarred version of their former selves.  To protect themselves from future attacks, declarations were made, rules created, and measures taken to remove all that could potentially hold the power to create chaos once again...or so they thought.  Could it be magic survived within the boundaries all these years later?  Could it be there are actually those who'd wield it with a just hand?  Could it be some could change from dark to light, but also reverse?  Could it be that decisions made in haste were not necessarily for the best of all involved...or could it simply be the wrong person's word was taken at the right moment?

First, keeping the girls straight is actually more of a challenge than I at first thought...guess they were rather good at playing their particular "role"!  Once you get in the swing of things with these remarkable twins, you can't stop! It was pretty nifty how they managed to play Flissara so well, what with them being not actually Flissara, but Flissa and Sara.  They were remarkably gifted actresses while also being remarkable in and of themselves.  Their skills were further impressive to me when you factor in the risks they were willing to take to save the Queen.  Seriously, I was SO WORRIED about their mom, but also the girls!  They were headed into some serious danger, some heavy unknowns, and all with simply a scrap of hope that for all their efforts the day would be saved.  That's dedication.  That's royal behavior.  That's LOVE.

Second, the surprise twist towards the end when things are unraveling...STUNNER!  I mean don't get me wrong, there is much to get caught up in along the way, including the brambles, the spells, and hungry sections of earth that simply gobble up those standing above (*gulp*), but the twists (as in the PLOT twists, not the place itself in the book) really kept you guessing!  I can't say more here because it would ruin the surprise, but trust me, you'll be on your toes with trying to keep friends and enemies straight. 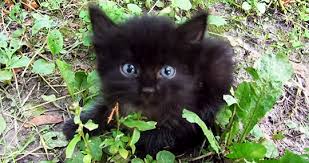 Third, can I just say I loved Nitpick! I mean the others are great, people and animal wise, and seriously the horse in the Twists is awesome and totally merits mentioning, but he's more than he seems without being SO much more!  Oh, but the lion?  Yeah, no...not a favorite...there are reasons, but yeah, you'll have to find out for yourself.  It's definitely a case of nothing being as it seems when you start this adventure, and I LOVED it all the more for it.

In the end, all I can say is BOY was that a rush!  Really and truly, it's one of the good ones, and with messages of inclusion, the power of friendship, and with reminders to not always take things at face value, and always be yourself, it's a great addition to kiddos reading lists as well as those upward in years.

Lover of books, Disneyland, dogs, and the Philadelphia Eagles.

Special thanks to the Disney Hyperion team for the copy for review.  (THANKS!)  For more information on this title, the author, or the publisher, feel free to click through the links provided above.  This title is celebrating its BOOK BIRTHDAY this Tuesday, April 9th, 2019 (as of this post), so mark your calendar, or pre-order your copy today!

Thank you so much for taking the time to read and review the book! I really appreciate it, and I'm so glad you enjoyed Twinchantment!