Today, we've got a spotlight on another title touring with Rachel's Random Resources that's going to take you between the pages with a special excerpt to excite and enchant!  So, if you're ready, let's get this introduction done properly first and then we'll get to the nitty gritty.  Put your hands together for... 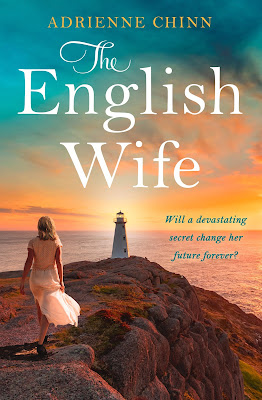 The English Wife
by
Adrienne Chinn﻿

About the book...
Two women, a world apart.
A secret waiting to be discovered…

VE Day 1945: As victory bells ring out across the country, war bride Ellie Burgess’ happiness is overshadowed by grief. Her charismatic Newfoundlander husband Thomas is still missing in action.

Until a letter arrives explaining Thomas is back at home on the other side of the Atlantic recovering from his injuries.

Travelling to a distant country to live with a man she barely knows is the bravest thing Ellie has ever had to do. But nothing can prepare her for the harsh realities of her new home…

September 11th 2001: Sophie Parry is on a plane to New York on the most tragic day in the city’s history. While the world watches the news in horror, Sophie’s flight is rerouted to a tiny town in Newfoundland and she is forced to seek refuge with her estranged aunt Ellie.

Determined to discover what it was that forced her family apart all those years ago, newfound secrets may change her life forever…

This is a timeless story of love, sacrifice and resilience perfect for fans of Lorna Cook and Gill Paul.


It’s September 2011 and forty-seven-year-old architect, Sophie Parry, is in a meeting with her boss, the celebrated New York architect, Richard Niven. His firm is involved in a commission to build a luxury “eco” resort; he has convinced the clients – a financial consortium of businesspeople -- that Sophie’s estranged aunt’s property Kittiwake, overlooking the Atlantic Ocean in the remote outport town of Tippy’s Tickle in Newfoundland, is the ideal location. He is assigning Sophie the task of going to Newfoundland to convince the locals to sell up.


A movement outside the window catches Sophie’s eye. The hawk turns its head, fixing her in its yellow eye as it glides past the shining glass, its orange-red tail feathers a stark contrast to the blue summer sky above the city’s skyscrapers.
‘Sophie? Can I have Jackie book your flight to Newfoundland? You’re clear what the consortium needs you to do?’
Sophie looks across the vast Italian glass desk at Richard Niven, the man whose award-winning architecture practice had drawn her over from London to New York ten years before. His thinning grey hair is cropped close to his bull-like head, and round, black-rimmed glasses frame his piercing hazel eyes. You look like a buzzard. She imagines him in twenty years’ time, jowls dropping from his square jawline, his eyes drooping and watery. By then he’d look like a vulture. Turning into his spirit creature.
‘I understand, Richard.’
‘Those photos you took up on the Newfoundland coast ten years ago, well, that coastline is just what the consortium has been looking for. Luxury travellers love nothing more than a place in an exotic, “eco”—’ he tweaks his fingers to indicate quotation marks ‘—location. Especially one that’s virtually impossible to access. Keeps out the riffraff. We’re talking about absolute exclusivity here, Sophie. They love the idea of Newfoundland. No one’s even heard of the place.’
‘Richard, the photos weren’t really meant … I mean, they were basically holiday snaps. The local community … I’m not sure how the consortium’s vision is going to go down with them. The hotel’s going to be a hard enough sell, but, seriously, Richard, a golf course? It’s winter there for eight months of the year, and it’s all moss and wonky trees. You have no idea. Those cliffs are a death trap. You know the locals call it The Rock? There’s a reason for that.’
Her boss waves his hand as if he’s swatting an annoying fly. ‘They play golf in Scotland, don’t they? My God, they haven’t seen the sun there for centuries. I got dragged around St Andrews last June with that obnoxious TV guy, pitching for his hotel job in a bloody parka. Couldn’t feel my fingers for hours. Bloody June! I could see my breath! Newfoundland can’t be any worse than that.’
‘Yes, but, you know, the locals in Tippy’s Tickle … I mean, don’t you think it’s better to get the locals on board rather than buying them out? It could be a wonderful employment opportunity for them. They’ve been having a hard time up there since the cod fishery shut down. There are a lot of talented people—’
Richard’s fleshy face folds into in a frown. ‘That’s another thing. Tippy’s Tickle? What kind of a name is that? That’ll have to go.’ He pushes his glasses down his large nose and peers at her over the top of the frames. ‘All you need to do is secure the land, Sophie. Everyone has a price and the treasure chest is full. We need hotel staff with experience, not some local yokels. Get them to sell up, and I’ll make you the lead architect on the project.’
Sophie sits back in the black leather chair. ‘The lead architect?’
‘Absolutely.’
This was a turn-up for the books. No matter the awards she’d brought to the practice, the front-cover features in Architectural Digest, the hard graft on the front line as the project architect, she’d never been made lead architect. That was a job for the big boys. Richard Niven, Tony Mason and Baxter T. Randall. The Triumvirate.
She frowns. ‘I’m not sure, Richard.’
A thick black eyebrow twitches above his glasses. ‘You’re not sure?’
‘I want you to make me a partner in the firm.’ Richard’s eyebrows shoot upwards like two birds taking flight.
‘Partner? You know I can’t promise that. I have to speak to the other partners. It has to be a unanimous decision, which is … well. I’m sure you understand.’
Yeah, sure I understand. She could almost feel the glass ceiling bang against her head. ‘You’re the controlling partner. I’m sure you can sway the others.’ She stands and straightens the jacket of her Armani suit. ‘Think of the consortium, Richard. Think of all the awards the firm will win. Think of the publicity. Richard Niven & Associates Architects will be up there with Corbusier and Frank Lloyd Wright.’
Richard fixes her with a stare, his eyes like two green marbles flecked with orange. ‘Fine. A partner, then.’ He presses the intercom on his desk. ‘Jackie, get Sophie on the next flight to Newfoundland.’ He glances over at Sophie. ‘Book economy.’ 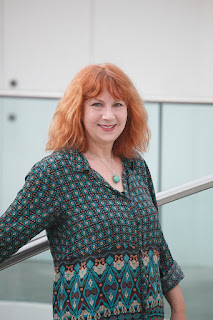 Adrienne Chinn was born in Grand Falls, Newfoundland, grew up in Quebec, and eventually made her way to London, England after a career as a journalist. In England she worked as a TV and film researcher before embarking on a career as an interior designer, lecturer, and writer. When not up a ladder or at the computer, she can usually be found rummaging through flea markets or haggling in the Marrakech souk. Her second novel, The English Wife -- a timeslip story set in World War II England and contemporary Newfoundland -- is published in June 2020. Her debut novel, The Lost Letter from Morocco, was published by Avon Books UK in 2019. She is currently writing her third novel, The Photographer's Daughters, the first of a 3-book series, to be published in 2021.