Today, we're joining Rachel's Random Resources to shine the bookish spotlight on a Historical Romance title, now available via Harlequin Books!  From the sound of things, it's gonna take all this knight's mettle to stay on task because me thinks that heart's will be set racing, and not from the speed of their travels alone!  Ready or not, here comes a sneak peek between the pages of today's blog tour guest and title in the spotlight... 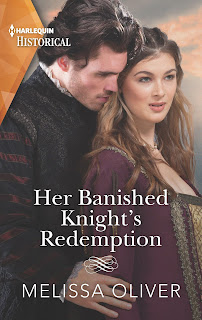 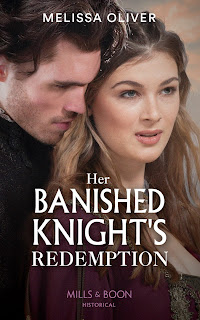 Her Banished Knight's Redemption
by
Melissa Oliver
Harlequin Books / Mills & Boon
About the book...
A lady’s need for protection
A knight’s chance for redemption
Exiled Knight William Geraint answers only to himself. Yet, a mission to find and reunite lost heiress Lady Isabel de Clancey with her family is Will’s chance to finally atone for the torment of his past. With every rushed mile, their intense attraction becomes dangerously thrilling. He swore to protect Isabel not seduce her, but their desire for each other could threaten the redemption he’s worked so hard to achieve…
HARLEQUIN  |  MILLS & BOON
AMAZON  US  |  UK
~~~~~~~~~~~~~~~~~~~~~~~~~~~
~~~   EXCERPT   ~~~
Introduction to extract- William Geraint has been searching far and wide for the lost heiress, Lady Isabel de Clancey. In the small village of St. Jean de Cole, in Aquitaine, he believes he might finally have discovered her. In the scene below he ingratiates himself in a group dance so that he can find out more…
He raised a brow. ‘Apologies, I do not mean to make you feel uncomfortable.’
‘Do you not?’
He smirked. ‘No.’
Isabel had to admit that there was something quite appealing about him when he smiled like that, with a sudden, unexpected spark of humour in his azure-blue eyes.
‘Well, what were you doing then, messere?’
They moved past each other in the circle and looped around the other couples before pivoting around to stand side by side, the length of her arm against the solid warmth of his. She felt slightly breathless being in such close proximity to the man.
‘I’m trying to ascertain whether you are someone I met briefly a long time ago.’
‘Oh? But I have never seen you before in my life,’ she said too quickly as they parted again, thankfully, and danced a few steps with different partners before returning to face each other.
‘I’m not so sure. There is something about your eyes that looks familiar to me.’
Dear God!
Her hazel-green eyes would have to give her away. They had always plagued her for being so strange…so uncommon and different. One eye had a dark patch across it, which meant that people always believed her eyes to be of two separate colours, even going as far as to call her names. Even her own father believed she was cursed because of this affliction.
‘I don’t think so, sir.’
He tilted his head as he watched her. ‘Pity, since I am starting to think differently.’ He took her hand and swung it up and above her head, allowing her to twirl around and under their joined hands.
For goodness sake. ‘Pity, since you are mistaken.’
‘I don’t think so. The more I look at you, the more I believe that it is you.’
They parted again and moved to the opposite side of one another, weaving around one couple and then coming together in a large connected circle.
‘Who are you?’ she demanded, frowning.
‘William Geraint at your service, but my friends call me Will.’
‘You and I are not friends, messere.’
~~~~~~~~~~~~~~~~~~~~~~~~~~~
About the author... 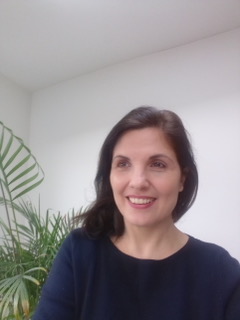 Melissa Oliver is from south-west London where she writes historical romance novels. She lives with her lovely husband and daughters, who share her passion for decrepit, old castles, palaces and all things historical.
Melissa is the WINNER of The Romantic Novelist Association’s Joan Hessayon Award for new writers 2020 for her debut, The Rebel Heiress and the Knight -  Book 1 Notorious Knights.
TWITTER  |  FACEBOOK
~~~~~~~~~~~~~~~~~~~~~~~~~~~~~