Hi guys and gals!
Welcome back to Satisfaction for Insatiable Readers.
Today, we've teamed up with Walden Pond Press to bring you the final stop on their current tour featuring the latest release from author Anne Ursu.  Whether you're already a fan of her work, or just now discovering it, you're in for a treat because the title on deck has MAGIC, WONDER, DANGER, and SURPRISES galore!  Combine those fabulous words with characters you'll want to know, and an adventure you'll wish to physically partake in (although reading it IS the next best thing!), and you can't help but see why I'm enthusiastic about it.  So, gather your wits, and remember who you are at heart because today's title is about to take center stage.... 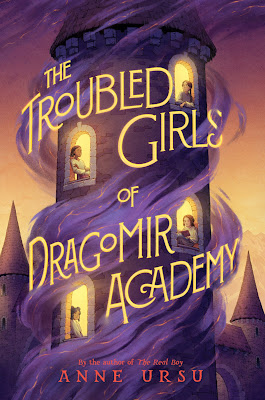 The Troubled Girls of Dragomir Academy
by
Anne Ursu
9780062275127
Walden Pond Press
About the book...
If no one notices Marya Lupu, it is likely because of her brother, Luka. And that’s because of what everyone knows: that Luka is destined to become a sorcerer. The Lupus might be from a small village far from the capital city of Illyria, but that doesn’t matter. Every young boy born in in the kingdom holds the potential for the rare ability to wield magic, to protect the country from the terrifying force known only as the Dread.
For all the hopes the family has for Luka, no one has any for Marya, who can never seem to do anything right. But even so, no one is prepared for the day that the sorcerers finally arrive to test Luka for magical ability, and Marya makes a terrible mistake. Nor the day after, when the Lupus receive a letter from a place called Dragomir Academy—a mysterious school for wayward young girls. Girls like Marya.
Soon she is a hundred miles from home, in a strange and unfamiliar place, surrounded by girls she’s never met. Dragomir Academy promises Marya and her classmates a chance to make something of themselves in service to one of the country’s powerful sorcerers. But as they learn how to fit into a world with no place for them, they begin to discover things about the magic the men of their country wield, as well as the Dread itself—things that threaten the precarious balance upon which Illyria is built.
~~~~~~~~~~~~~~~~~~~~~~~~~~~~~~~~~~~~

From the moment I met Marya, I knew she would be a special girl.  Despite all the attention being hefted on her brother, despite all the grief her parents give her, despite all the hard times, heartless moments, and a general lack of love displayed, I just knew that her story wasn't meant to end there.  She was meant for bigger things, and whether or not her own brand of magic was recognized, one day she'd be seen for who she was.
Lucky for her, she has a select group of people that believe in her, and no matter how small, or distant that support may be, it matters.  SHE matters.  In fact, all the girls dumped or rounded up at this girl matter SO MUCH MORE than they can even fathom.  With those tenuous bonds of friendship made frayed to their ends, the quest to uncover the why behind the school, the curriculum (or lack thereof), and just why that terrible Dread is acting more our of sorts than usual seem like a lost cause, but I beg you, put your trust in those that you're told to not trust.  Give a chance to those that have been written off.  Use your noodle and gather your courage for all the times you were second guessed or under minded, and take heart because their world hadn't seen anything yet...and the best kept secret of all is the one hidden in plain sight.
I loved the story, and the characters.  Trying to figure out the angles along the way kept you going, and just when you thought it would go one way, you were back to square one, but if you follow Marya's trail wherever it may lead, you'll be THAT much closer to the answer....and the discovery that she makes that no one saw coming.  I can't wait to see what might be in store for future tales!
~~~~~~~~~~~~~~~~~~~~~~~~~~~~~~~~~~~~
About the author... 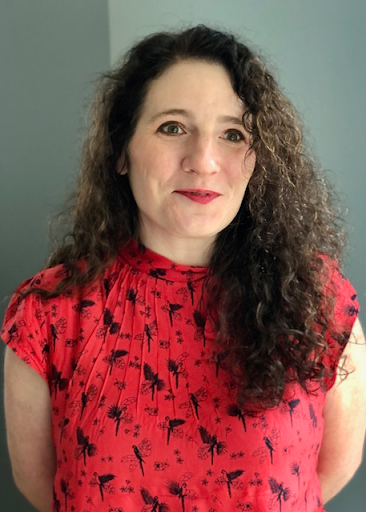 Anne Ursu is the author of several books for young readers and is the 2013 recipient of the McKnight Fellowship in Children’s Literature. Anne’s latest book, The Real Boy, is an Indie Next pick and on the 2013 longlist for the National Book Award. She is also the author of Breadcrumbs, which was acclaimed as one of the best books of 2011 by the Bulletin of the Center for Children’s Books, School Library Journal, Publishers Weekly, Amazon.com, and the Chicago Public Library. It was also on the IndieBound Next List and was featured on NPR’s Backseat Book Club. Anne is also the author of the three books that comprise The Cronus Chronicles: The Shadow Thieves, The Siren Song, and The Immortal Fire.
Anne teaches at Hamline University’s MFA in Writing for Children and Young Adults, and lives in Minneapolis with her son and three cats.
~~~~~~~~~~~~~~~~~~~~~~~~~~~~~~~~~~~~

Special thanks to Debbie and the Walden Pond Press team for the chance to bring this tour to you as well as the ARC for review. (THANKS!) For more information on this title, the author, or the publisher, feel free to click through the links provided above. This title is available now, so click on over to snag your copy today, and be sure to check out the rest of the tour for more bookish fun!
October 12
A Nerdy Bibliophile in Wanderlust
Unleashing Readers
October 13
Read Wonder
October 14
Nerdy Book Club
October 15
A Library Mama
October 16
Maria’s Mélange
October 17
By Singing Light
October 18
Bluestocking Thinking
October 20
Satisfaction for Insatiable Readers
Until next time, remember...if it looks good, READ IT!
Posted by Gina at 1:00 AM