Today, we’re back again with another Rachel’s Random Resources tour, this time featuring a new Historical Fiction novel you won’t want to miss. It’s a work of Fiction based around facts that reads much like a biography. So, if this genre isn’t your usual cup of tea, but the other is, all the more reason to give it a go….especially since I can’t say enough how AMAZING it was! Let’s get between the pages of today’s ebook of choice and blog tour guest... 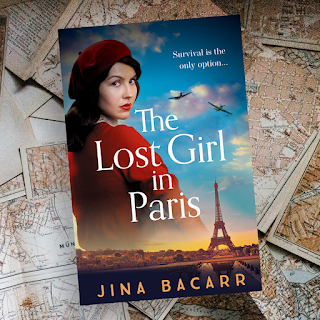 The Lost Girl in Paris
by
Jina Bacarr
About the book...
'I will never forget what the Nazi did to me. Never'
1940, Nazi-occupied Paris. A powerful story of love, tragedy and incredible courage, about one woman whose life is ripped apart by war and risks everything to seek justice. Brand new from the bestselling author of The Resistance Girl.
As Nazis patrol the streets of the French capital, Tiena is alone, desperate and on the run. After defending herself against the force of an officer, she must find a new identity in order to survive.
An accidental meeting with members of the Resistance gives her a lifeline, as she is offered the chance to reinvent herself as perfumer Angéline De Cadieux.
However Angéline will never forget what happened to her, and will do everything she can to seek revenge. But vengeance can be a dangerous game, and Angeline can only hide her true identity for so long before her past catches up with her, with some devastating consequences...
Paris, 2003. When the opportunity arises for aspiring journalist Emma Keane to interview world renowned perfumer Madame De Cadieux about her life during World War Two, she is determined to take it. There are secrets from her own family history that she hopes Angéline may be able to help unlock.
But nothing can prepare Emma for Angéline's story, and one thing is for certain - it will change her own life forever…
An absolutely heartbreaking, unforgettable historical novel of war, sacrifice and survival. Perfect for fans of Suzanne Goldring, Ella Carey and Catherine Hokin.
AMAZON
~~~~~~~~~~~~~~~~~~~~~~~~~~~~~~~~~
This isn’t just a story of wartime France.
This isn’t just a story of a young woman coming of age.
This is a story of HOPE, of SURVIVAL, of how even the darkest of times WILL end, and GOODNESS, BEAUTY, and LOVE can still be found, if only we have the courage to look for it.
Emma and Angéline's story, for it is as much the one’s as it is the other’s, was so touching, so moving, you can’t help but be transported back and forth in time with them as they discover more about each other, as well as themselves. From the loss of Tiena to the emergence of Angéline, the horrors of Dachau to the House of Doujan, the lessened health of a loved one to discovering more than just a tenuous glimpse at your family history, the story’s titled Lost Girl wavers from one character to another throughout. I beg you to never believe for a moment though that they were ever TRULY lost because if you still live within one heart, it can never truly come to pass.
All in all, I can only say it took a travesty from our past, and managed to show how beauty, strength, courage, and love still could be found amongst it all. It was heartbreaking and heart-warming all the same time, and by book’s end, I found myself brought to tears, for everything they went through, all the hurdles, hardships, and sacrifices, but also the moments of grace captured so vividly; it’s a story that I won’t soon forget. A great read and recommendation for Historical Fiction fans as well as readers of Biographies and Memoirs.
~~~~~~~~~~~~~~~~~~~~~~~~~~~~~~~~~
About the author… 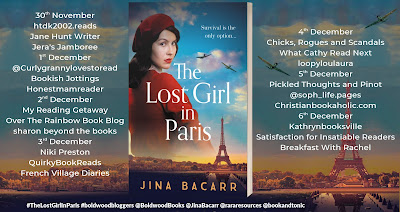