TCBR AWARENESS TOUR: Avalina Jones and the Eye of the Storm by Lori Adams - REVIEW + GIVEAWAY!

Ahoy there matey!
We be welcoming you back to this here site that aims to bring you bookish treasure at every turn...Satisfaction for Insatiable Readers.
Today be a special day indeed...I can smell it on the air, feel it in the waves, and see it in...wait, are those gathering storm clouds?  Okay, perhaps I should shed my pirate accent (because let's face it, I can be creative, but a whole post worth might be overdoing things!), and get on with the show before the show becomes us!  *eyes storm clouds* 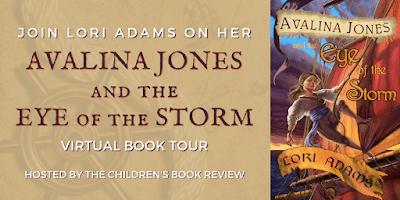 Now on deck, we've got book one in what I'm assuming will be a series (*fingers crossed...and eyes...and toes*) that fits nicely into the Children's Fantasy genre, but is a GREAT READ for shellbacks and landlubbers more advanced in years as well.  It's currently making the rounds with The Children's Book Review, so while I get to reviewing, you get to reading because there's a treasure to be found beyond the book (though that is treasure enough!), but well before you reach the end of today's post (can we say GIVEAWAY?).  Ready, set, let's set sail for adventure with today's blog tour guest and ebook of choice... 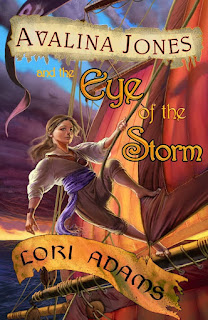 Avalina Jones and the Eye of the Storm
by
Lori Adams
9781737131205
Spyhop Publishing
About the book...
When a young girl learns she is the Last Heir of the legendary pirate Davy Jones, she is whisked away to begin life aboard an enchanted schoolship for Pirate Heirs where danger and excitement awaits.
Contemporary kids who happen to be Heirs of the most villainous and celebrated pirates in history. Superstitions, mysteries, curses, secrets, strange ocean creatures, undead pirates, and seafaring legends will thrill middle-grade readers in this rollicking, globe-trotting adventure.
Avalina Jones, the Last Heir of the infamous pirate Davy Jones, has never heard of Sea Magic, flying dinghies, Pirate Heir schoolships, phantom islands, undead pirates, or creatures called Half Ones. And she has never understood her strange connection to water. But when a beautiful woman arrives in a swirling waterspout, Avalina’s life explodes with more adventures than she can possibly imagine. She takes her rightful place aboard a giant Pirate Heir schoolship teeming with Heirs of the world’s most nefarious pirates.
Raised as a Landlubber, Avalina quickly realizes bizarre and danger are normal aboard Pirate Heir schoolships-food fights back, school supplies giggle or explode in your face. And not everyone can be trusted.
When Avalina is accused of a terrible crime, she must prove her innocence or risk being banished from the schoolship forever-and this in the middle of a crucial Treasure Hunt!
Avalina races to unlock the secrets of the ship, and makes a dangerous discovery that threatens everyone aboard. With the help of her new friends Charlie, Pippa, and Bummy, Avalina draws closer to the truth, unaware that a deeper, darker fate awaits.
Author Lori Adams expertly delivers a story that is timeless, bringing together elements of sea lore, magic, and adventure. The first book in a seven-book series, Avalina Jones and the Eye of the Storm, is a romping tale for middle graders who are searching for the next enduring fantasy classic.
AMAZON  |  BOOKSHOP
☠     💎     ☠     💎     ☠     💎     ☠ 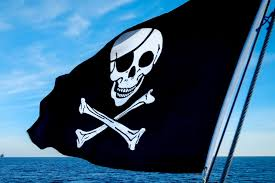 Do you like ACTION?
Do you like ADVENTURE?
Do you like heartwarming stories with lead characters you can't help but love, despite their mysterious backgrounds, and uncertain futures?
Do you enjoy finding yourself in the middle of a magical pirate ship with new friends AND enemies, as well the potential for an infamous family curse to be weighing over your head?
Do you like second, third, and even fourth layer characters that are drawn into the forefront because they too deserve their time in the spotlight and are memorable too, even if the story isn't there's at heart?
Do you want me to stop asking if you love these things because OBVIOUSLY you're still reading this and the answer is pretty clear...YES, WE ARE SHARING THE SAME BOAT OF BOOK LOVE FOR THIS TITLE?
Good because I was running out of questions!  🤣
Seriously though, this book was un-put-down-able from start to finish.  Once I knew Avalina, I had to know more.  I felt bad that she had the start she did, but as time goes by, some of that grit, that gumption, that I can survive anything attitude really comes into play, and you can't help but wonder...was that why she grew up where and how she did?  (*ponders*)  The moment her non-Anna-esque time comes to seek bigger, grander adventures, I was in awe...I mean it's not often a character LITERALLY escapes in/on Cloud #9 (inside joke...read it, you'll see!), lands where she does, gets passed around like a bad omen, only to find a home she never knew to look for, with friends that are by her side through thick and thin!  Pirating may be her heritage, but the size of her heart is the real treasure...and I know a couple of Buccaneers that would swear to that statement in a heartbeat, let alone members of the crew.
Get on board this new Children's Fantasy series post haste because once the ship has sailed...okay, well the only thing that will happen is you'll have to play catch up in order to read the series, but seriously, be IN THE KNOW NOW and you can grab top rank in the fandom order of things!
☠     💎     ☠     💎     ☠     💎     ☠
About the author... 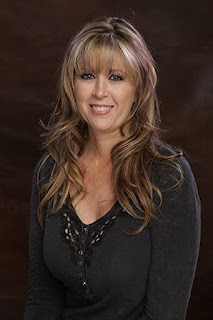 LORI ADAMS is the author of the Avalina Jones series for middle-grade readers (Avalina Jones and the Eye of the Storm (#1) as well as two young adult series: The Kate March Mysteries: Speak Easy (#1) set in Hollywood during the Roaring Twenties, and the Soulkeepers Series: Forbidden, Awaken, and Unforgiven, a paranormal fantasy set in the quintessential but fictitious town of Haven Hurst, Connecticut and first published through Random House.
Lori was born and raised in Oklahoma but moved to Southern California where she lives with her family. She loves traipsing along SoCal’s wonderful beaches, watching Angel’s baseball, Cowboys’ football. Aside from writing, Lori loves reading and watching Classic Hollywood Movies.
For more information, visit https://loriadamsbooks.com.
☠     💎     ☠     💎     ☠     💎     ☠ 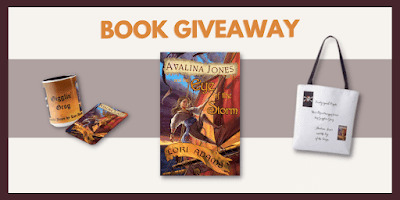 Special thanks to Bianca at The Children's Book Review for the chance to bring this tour to you and to the publisher for the ecopy for review. (THANKS!) For more information on this title, the author, the publisher, this tour, or those on the horizon, feel free to click through the links provided above. Be sure to check out the rest of the stops on the tour for more bookish fun!
Until next time, remember...if it looks good, READ IT!
Posted by Gina at 12:30 AM