Today, we're shining the BOOK SPOTLIGHT on a title currently touring with Rachel's Random Resources. It's a story about leaving the past in the past, and yet when you make a living digging up history, that's kind of hard to put into practice! Ladies and gents, let's get between the pages of today's title in the spotlight and blog tour guest... 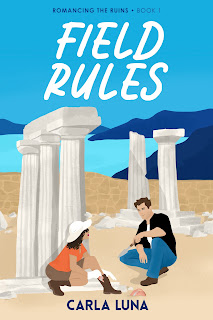 Field Rules
by
Carla Luna
About the book...
What happens in the field, stays in the field. Or does it?
After the disastrous way her first archaeological dig ended, graduate student Olivia Sanchez abandoned her dreams of working in the field. Now, thanks to a last-minute teaching opportunity in Cyprus, she’ll get another chance to explore ancient history firsthand. This time, failure isn’t an option.
But digging up the past takes on a whole new meaning when she’s forced to team up with her ex, shovel bum Rick Langston.
For years, Rick has proven his archaeological skills all over the Mediterranean. But with no graduate degree—and a habit of attracting trouble—his reputation could use a little rehab. All he has to do is play by the rules while he’s in Cyprus and he’ll secure a coveted recommendation for his next job. Until Olivia resurfaces like a cursed relic from the past.
Given that their last fling nearly led to their academic ruin, Olivia and Rick can’t afford to repeat their past mistakes. But as they work together under the scorching Mediterranean sun, the heat between them proves impossible to ignore.
Amazon UK | US
B&N | APPLE | BOOKS2READ
~~~~~~~~~~~~~~~~~~~~~~~~~~~~~~
~~~ EXCERPT ~~~

This scene takes place during the first week of the archaeological field school in Cyprus. After spending the day surveying in the sweltering heat, Olivia develops a brutal sunburn. When she wakes up at midnight, unable to sleep, she discovers Rick is also awake. Feeling vulnerable, she tells him she’s ashamed her first day went so badly.

Rick gave Olivia’s shoulder a gentle squeeze. “This was just the first day. It’ll get better.” When she flinched in pain, he drew back his hand. “Sorry. I didn’t mean to hurt you.”

“My sunburn is killing me. Do you have any aloe?”

“Sure. Hang on a minute.” He leapt up from the bench.

She scanned the field again, looking for signs of movement. She didn’t want anyone to catch the two of them together. Even if she hadn’t done anything wrong, meeting up with Rick in the middle of the night hardly looked innocent. But the camp remained quiet. Everyone was probably dead asleep, wiped out from the first day of survey.

When Rick returned, he sat beside her and handed her a large bottle of aloe vera gel. She squirted the aloe onto her palm and kneaded the gel onto her shoulders but strained to reach her back.

Rick took the bottle from her. “I’ll do it.”

With gentle fingers, he massaged the aloe into her overheated skin. The cooling gel sent shivers down her spine, making her recall a long-dormant memory. He’d administered the same treatment when they’d been together at field school seven years ago.

As if he knew what she was thinking, he chuckled. “I seem to remember doing this at Clear Lake. You got so fried during that first week of excavation.”

“It’s completely unfair. You’d think my Mexican heritage would come in handy. My father never burns. Neither does my sister. And my mom’s half-Italian, so she tans beautifully.”

“So do you—it just takes you a little longer.” He continued rubbing the aloe on her back and shoulders, his movements slow and gentle. “After a few weeks in the field, you had an incredible tan. I should know since I’m the one who saw those tan lines.”

Like the first time he’d seen her naked, when they’d gone skinny-dipping together. He’d stared at her in awe and told her she looked beautiful. No one had ever made her feel that way before.

Stop it. No more delving into the past.

But she couldn’t help it. Now that they’d grown closer, it wasn’t merely the memories that were returning but the powerful feelings as well. She wanted him to keep touching her. To brush his lips against her bare shoulders until she quivered with delight.

What would happen if she turned and faced him? A rush of desire enveloped her as she imagined claiming his lips and reigniting the sparks between them.

She needed to pull away before she melted into a puddle of longing.

But she couldn’t find the will to move. 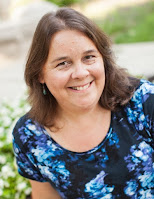 Carla Luna writes contemporary romance with a dollop of humor and a pinch of spice. A former archaeologist, she still dreams of traveling to far-off places and channels that wanderlust into the settings of her stories. When she’s not writing, she works in a spice emporium where she gets paid to discuss food and share her favorite recipes. Her passions include Broadway musicals, baking, whimsical office supplies, and pop culture podcasts. Though she has roots in Los Angeles and Vancouver Island, she currently resides in Wisconsin with her family and her feisty Siberian cat.
SITE | TWITTER | FACEBOOK | INSTAGRAM | BOOKBUB
~~~~~~~~~~~~~~~~~~~~~~~~~~~~~~