She's So Dead to Us by Kieran Scott

Good morning, everyone!
Welcome back to another day here at Satisfaction for Insatiable Readers!  Hello?  Are you there? ~~echo~~ It's a bit eerie actually...Twitter and the blogosphere is so quiet now that BEA is in full swing.  For those of us not attending this year, it can make you a little moody.  HOWEVER, just because we can't be there in person, doesn't mean we can't celebrate books with a little event of our own.  Check out the Armchair BEA event over at There's A Book, going on now!  Not certain you want to participate in an event at all?  No worries.  We'll keep the fun rolling through with reviews for you right here. (Hey that rhymed!) Speaking of which....

The title featured in today's post is a fun read indeed.  Between the relateable characters and the Crestie (I'll explain that term later on) goings-on, there is drama, love, and some frustratingly "why-did-you-do-that" moments along the way.  In summary....it was GOOD!  Curious?  Well, let's cut the suspense for you.  Today's book of choice is.... 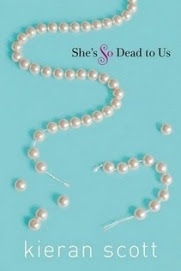 She's So Dead to Us
by
Kieran Scott

Ally Ryan is one lucky girl.  She's great at basketball, decent in her studies, lives on the "crest" side of town and has wonderful friends.....in her dreams.  Up until about 18 months ago, that would have described her life.  Up until the day her father gave some not-so-good investment advice and caused most of the Cresties to lose significant amounts of their eternal nest eggs, she was considered one of them; a perfect match to her clique of friends, their Sunday dinners, favored activities and even a little trouble from time to time.  Up until that time, her life was for all intents and purposes, a fairytale.  Now?  Not so much... 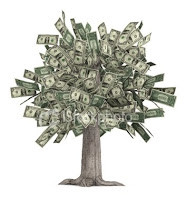 You see, although she wasn't truly to blame for what happened, her friends (now former friends) still think she should pay for the mistake her dad made.  As they see it, all the bad things they've been through in her silent absence (they left town in a hurry and she never contacted anyone) would have never occurred if not for this one blunder.  One things for sure, you don't mess with peoples money.  When those people happen to be some of the affluential Crestie's that rule the school (and town for that matter), you better think twice before showing your face again.  Too bad Ally's mom doesn't understand this fact before moving both herself and her daughter back to town and trying to pick up where they left off (ridicule, back stabbing, the works...all waiting for them).  Too bad the old family mansion is now occupied by a new family and her old bedroom by one Bedroom Boy of hotness (that would be Jake Graydon) that would turn the heads of any female passer but seems to be developing feelings for his newest acquaintance (that's Ally).  Too bad he's a Crestie and she's a Norm; two things that never mix.  Or do they?

Ally Ryan is not your average girl.  She has strength (both internal and external), talent, and a back bone to boot (in most cases); she's not one to take things lying down.  Will that be enough to get her back in the good graces of her former friends?  Depends.  On one hand it's the old adage of "keep your friends close, your enemies closer" and on the other hand "leave well enough alone".  I'm not too certain either phrase is a person mantra of these girls after some of the antics they pull on each other, but let's just say that payback is a.....bad thing (what, I wasn't going to say what you thought I was....keeping it G or PG here...).
*WARNING* FAN GIRL MOMENT TO COMMENCE IN 3...2...1...* 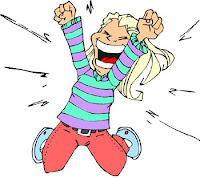 OMG OMG OMG!  I literally just finished reading my ARC copy of this book yesterday around lunch time and simply could not wait to spread the love about it. (Seriously, I think I talked about the book to at least five or six people already and with this post...the masses...)  It was GREAT! One of those non-paranormal (since they are all the rage right now, this change was refreshing...) YA finds that comes along and begs to be read...in completion....in one sitting. Alas, I didn't have that time available, but I did finish it in record time given my availability. Started on Saturday, finished on Monday. Not bad, not bad at all....

The book is written with a two person point of view.  It alternates between Ally telling the story and her world through her eyes, then Jake telling his portion.  It's very easy to follow since the "chapters" are rotated along with their point of views by listing their name over the next section; not being a huge fan of multiple story tellers in a book, even I liked it!  I definitely identified the most with Ally's character; not so much in the "been-there-done-that" of her life experiences, but more in the personality department.  I could definitely see myself saying and reacting to several situations in the same way, as I'm sure many of you will.  Hopefully you don't identify with the more evil former friends, although without them and their antics both for better and worse you wouldn't have much of a story...gotta have the good AND the bad.  Let's not forget about Jake Graydon now.  You spend most of the book trying to figure out whether you love him, hate him, and mostly end up somewhere in between the two.  I think the author choosing to narrate through this character as well though really helps to make a case for him since you get to see the boy behind the image.  The struggles he faces, potential ridicule from others considered, and the final motivation to his decisions (which as it turns out is not always what you would think).

The story takes place over the course of a school year and when the months change you get this little inserted page that reads like snippets of hallway conversations or text messages that might fly back and forth between the gossiping crowd.  Nice segway to show you public perception at the school.  For those non-Twilight fans (GASP!  The horror....but I totally forgive you!), there is a little bashing of the over zealous nature to adopt everything to Twilight-esque standings...especially when the prom theme is Twilight.  The up-to-date nature of the references and happenings definitely adds to putting you in the story as if it was happening right around you.  (Nice touch!)  Also, the cover...let me just mention that cover.  (Okay, so I mentioned it right there, but now I'm going to talk about it a little.)  It's a perfect fit for the story.  Simple in design, eye pleasing in color combo, and it cuts straight to the books core.  Think about it.  A string of pearls signifying wealth and women, broken to signify the connections that were there are now lost and really, who wants a broken strand of pearls (that's where the "dead to us" part plays in)?  To sum it all up....you won't want to put this one down and when the last page is turned, you'll be joining me in hoping for a follow up book...SOON!

The scheduled release date is set for 05/25/10 (TODAY) so be on the look out at your local book store!  Happy book birthday to author Kieran Scott!  If you happen to be reading this....any chance of getting a sequel pronto? Yeah, that would be FANTASTIC! ^_^  (Seriously....I can't wait!)  You can find out more about the author herself and her work via her site and Twitter.  Special thanks to Lucille at Simon and Schuster for the ARC to review.  (THANKS!)  To find out more about this title and many other fine reads, visit their site or follow along on Twitter.  (Gotta love Twitter...seriously puts readers in touch with publishers and authors they love...not to mention they get the instant pulse of the fans.)

O I like two person perspectives :) thanks for the review :)

Scott is always fun to read. I can't wait until I can get a copy of this!

I really enjoyed this book, except for the cliffhanger ending. Not fond of books that have little or no resolution, but the writing was good enough that I do want to read on.

It's definitely echoey, out there. Glad I'm not the only blogger on the planet who isn't at BEA.

Ms. Yingling: This is actually the first book of her's I've read so I was happily surprised. Glad to hear the rest are potential favorites as well.

Bookfool: Yeah, that ending I was looking at the page going WHAT! YOU CAN'T JUST LEAVE IT LIKE THAT! UH! ^_^ Welcome to the club on non-BEA attendees...happy to have you!

Fantasic review! I've been only hearing great things about this book, and I love the fact that it's told from the POVs of two people. Gotta read it!

After I read your Teaser on this, I added it to my TBR list. Now that I have read your review I am even more excited!

I think I'm going to have to read this one, your review of it was so great! It's hard to resist a book when there is such enthusiasm behind it. Can't wait to pick it up!

Emidy: Thanks and definitely agreed on needing to read this one...can't WAIT for the sequel!

Julie P: YAY! Another possible future fan....love to know what you think of it once you've read it!

The1stdaughter: *SMILE* Yes, I do tend to get enthusiastic about books I really liked....all the better for blogging! ^_^

Thanks for the great detailed review! This book is going into Not-So-Bebe Girl Autumn's read list! (Which is awesome because that means that I get to read it when she's done!)

This sounds fantastic! Definitely adding to the TBR

jewelknits: LOL. Glad I could help add to the TBR list for you both. ^_^

NotNessie: Yay! Can't wait to see what you think...