﻿Hi there tweeps!
What's shakin?
Hopefully your weekend is right on track and you're just stopping in for a quick looksie...or perhaps another book to add to your reading repertoire.  As usual, I am happy to oblige.  ^_^

Today's post is brought to you courtesy of Tracy Grand, the creator of JacketFlap...a site many of you are already familiar with, but if not just check the link to get acquainted with this "comprehensive resource for information on the children's book industry".  (Thanks!)  Speaking of getting acquainted, Tracy was grand enough to clue me in on a fabulous blog tour going on RIGHT NOW (as in today's stop is HERE!  YAY!) for none other than author Mark Jeffrey and his Max Quick series.  The first book, Max Quick:  The Pocket and the Pendant, just celebrated its book birthday on May 1st so its already "in the wild" for your book purchasing pleasure.  I myself have not read it at this point, however in reading ABOUT it on the official website, I was curious to know more.  Lucky for me, my feature on the tour fit perfectly with my curiosity....an AUTHOR INTERVIEW!

Without further adieu, allow me to introduce author Mark Jeffrey... 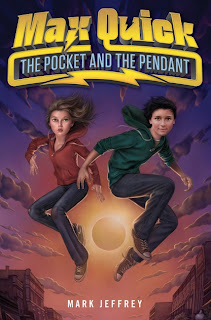 First off, in a nutshell....can you tell us what the story is about....

Sure. When time stops all over the world, creating 'the Pocket' of time wherein basic physics are strangely altered, only Max Quick and a few other kids seem to unaffected. While the rest of the world remains frozen around them, Max -- and Casey, Ian and Sasha -- find that it is up to them to discover how this has happened and reverse it. Along the way, they encounter 'magic' Books, ancient artifacts and other clues to the riddle of stopped time. And Max finds that his own true identity may not be what he once believed. Now he must embrace his past to save the future and prevent the very world from being altered forever ...

How did the premise of the story come to you?

It was very subconscious, to be honest. I just started writing and experimenting as I went along. I wasn't even sure if I would finish it or whether it would be any good. And I didn't tell anyone I was doing it -- mostly because there was a chance I wouldn't finish it, and I didn't want to be That Guy who's forever writing a novel.

Did any character's voice speak more loudly as the initial story progressed?

Yes I would say that Casey Cole became much more front and center in successive drafts. She started as sort of meek and a little annoying and become much more of a full person as she developed.

Speaking of characters, we all know that authors often times inject aspects of their personality or habits into their written works. Is there a character you identify with most in The Pocket and the Pendant? Who and why?

I'd say Max and Ian are the 'jock' and the 'nerd' sides of myself respectively, just divided into two characters. Johnny Siren -- the villain -- is equally a side of me: the side that gets obsessed unhealthily sometimes. It's funny when people ask me which character in the book I am and I say, All of them. But how else could it be otherwise? Of course I'm all of them -- the good and the bad!

You seem to have a good sense of humor judging from your "About the Author" section on The Max Quick Series site. Can readers expect that same wit to be found in the story?

Well I hope so! I definitely tried to put some jokes and funny dialogue in from time to time, so you'll have to tell me if it works or not.

I noticed that there was a pretty severe "overhaul" on the cover art between its original self-published debut and it's HarperCollins release. How much of a hand did you have in that process? Which cover do you feel represents the story better?

Well the first cover was something I came up with in conjunction with an artist I hired. I wanted both Max and Casey on the cover together: I knew that right away. I wanted there to both a boy and girl so that it wasn't just 'Boy Book' or a 'Girl Book' -- it was a Both Book. I wanted a viewpoint character for everyone. I love the first cover but I realize now there are problems with it: Max and Casey are so small you can barely see them; the colors are very dark and from far away or at a small size it looks really muddy; and perhaps the worst mistake of all is it doesn't even say Max Quick anywhere on it!

When HarperCollins redid the cover art, they basically solved all these problems. Plus the colors are really bright and amazing -- but without losing the essential creepiness of the Pocket and the eclipse. So I am really really happy with the new cover, I definitely think it is the better one.

Any juicy tidbits to share about the next installment in the Max Quick series?

Well it's completely written! There are two shorelines that intertwine, and we flash back and forth between them. One part of the book takes place in 1912, which is sort of a keystone year for the series. I mention it briefly in 'Pocket', but in this book -- called MAX QUICK: THE TWO TRAVELERS, by the way -- it is much more front and center. The story template for 'Pocket' is very Wizard of Oz: you go on a journey, you pick up a new character at every stop until you get somewhere and learn something important, and then in the third act you are proactive, you're on offense rather than defense. In 'Travelers', it's much more 'The Empire Strikes Back': you start off with an event that separates the characters into two groups; you cut back and forth between what everyone is up to, then the two story lines reunite with some massive event where the main character learns something really big about himself. And that's all I'm going to say about that for now :)

When I'm not writing, I can be found....
...rollerblading on the Santa Monica bike path

My favorite book is....
...it's a series called The Chronicles of Thomas Covenant the Unbeliever.

An author I truly admire is....
....Stephen R. Donaldson and Anne Rice.

Something I know now that I wish I knew then....
....having a good Lit Agent makes all the difference.

My best advice for future authors-to-be....
...find some inventive way to stand out from the crowd: podcast your book, release it for free on the Kindle (or least the first installment), etc. 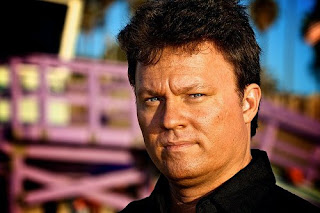 ....please note that I look exceedingly serious in this picture.  For this, I apologize.  I am actually not that serious.  I will endeavor to look sillier next time, promise.

Mark Jeffrey is the author of the Max Quick Series of books and podcast audiobooks. His first podiobook, 'Max Quick 1: The Pocket and the Pendant', has received over 2.4 million downloads to date. He has co-founded four internet companies and written two novels.

Thank you so much for both your time and that fascinating look behind the book Mr. Jeffrey!  Sounds like a great beginning to a series we'll be seeing for some time to come. 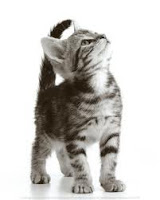 So what say you readers?
Is your interest piqued?
Perhaps you've already read it and want to share an insiders look at the adventure that awaits.  Thoughts and comments welcome as always!

For more information on this series, feel free to check out the official website, check out the feature from HarperCollins over at the Books and Games site, or follow any of the other intriguing links scattered within this post.

Hey everyone ... Mark Jeffrey here. If you have any follow up questions happy to answer ... and thanks to Insatiable Reader for the opportunity to post!

Interesting premise. I agree that the cover is really amazing - it does seem like a "Both" book, as the author says :)

Mark - do you know if it will be published in England at all?

Nayuleska --
Yes should be available in England on May 15 (at least according to UK Amazon). Hope you grab a copy and enjoy it! :)
- M

Markj: Thank you so much for stopping by and for answering Nayuleska's question! Congratulations on the new release and best of luck on Max's next adventure. ^_^

Nayuleska: Doesn't it? Great question too....

Mark - thank you for letting me know. I've seen its with Harper Collins, who I already review books for, so I'll put in a request for it. I'll let you know when I review it.

This is one I've been reading with the Turkeybird and he's really loving it chapter by chapter.

I love your "quid pro quo" section of your interview especially! So fun and unique! A great quick way to get to know the author. Fantastic! :o)

the1stdaughter: Ah, another great recommendation from the dynamic duo. ^_^ Thanks for the kind words! I can be at a loss for words (hard to believe I know) sometimes with interviews....I use that section to bring everyone together on a more common level.