Hi there!
Welcome back to Satisfaction for Insatiable Readers….the place to be (especially on a Monday) when you need a break from the rigmaroles of daily life and a bookish escape is all that will do.  First, a quick reminder; there are THREE contests currently running on the site and they are all begging for a few more entries.  In fact, one ends TONIGHT!  So, don’t delay…there’s something for everyone.  Just check out the right hand side bar under ‘Current Contests’ for more details.  Now, back to today’s post…. 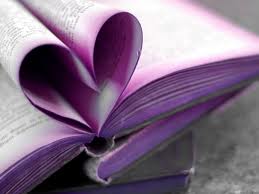 This week is all about the love…the bookish love that is!  No, I’m not turning all sappy on you or anything (not that there’s anything wrong with a little romance), believe me there’s enough of that out there right now without me adding to it all (…which explains my catching part of ‘The Notebook’ on TV last night…), but we are going to focus on one of the things we ALL love…books!  Yes, books.

In their many shapes and forms, they provide oh-so-many things to the masses and yet no two people can experience a single manuscript in the exact same way; marvelous, no?  This week, I endeavor to bring you bookish love in its many variations…and believe me, some may seem like a stretch but we’ll keep it fun, promise.  ^_^  So, whether you’re happily attached, married for life or living in the land of single-town, come one, come all and let’s revel in our love of reading.

To start the week off right, first up we have a recent Young Adult release from Chronicle Books where love and its pursuit stands front and center. Today’s book of choice is… 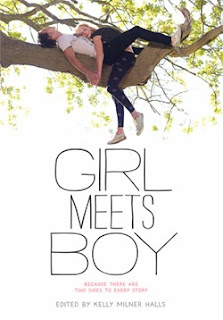 Some of the brightest names in YA literature today come together to create this unique collection of short stories featuring the potentially romantic entanglements that can occur when girl meets boy, boy meets girl, boy meets boy…and so on.  It’s a fresh look at the new version of the age old story with many a twist.  How so?  Patience, my friend….patience; I’m getting there… ^_^

There are six stories in all, each one told first from one person’s point of view and then the other thus allowing us not only a well rounded view of the events that transpired but also the chance to step inside the mind of the other and see just what was passing through.  I mean really, how often have you wondered what someone was REALLY thinking?  Despite what comes out of our mouths, our thoughts are not always as censored, with good reason since they are for our minds eye (ears?) only.  But wouldn’t it be great to not be in that limbo position of wondering, worrying, or pure unease?  *ponders*

Okay, so I’m of a mixed opinion on that because really, there are simply some things you just don’t want to hear (and some people already don’t have a filter, hence spewing everything that passes through their heads no matter how TMI it might be…*shakes head*) but for a short time at least, it would be pretty awesome…which is one reason this book rated high with me.  The authors, though writing on different sides of the fence (so to speak), made each story work and rather well if I do say so myself.  You’d not have guessed two separate individuals wrote each side of the story as they work so well together.  Like peas in a pod, they fit together like they were made for each other…even if the characters might not always have been and the “love stories” don’t fit the classic mold.

As with most collections, when we take a closer look at the individual stories some rank lower while others resonate in our minds long after we’re through.  In an effort not to spoil the surprises that abound within…because believe me, there are surprises….suffice it to say that a myriad of scenarios are covered.  From the girl that needs rescuing despite her opposition to such to the girl doing the rescuing, closeted desires to culture clashes, interracial relationships to big “changes”….like I said, a lot is covered in this little book.  My favorite would have to be story three for the sweetness injected by another just trying to make things right in the world.  My least favorite would be story five….something about the way it was presented the male lead character got on my nerves.

That being said, there is something to learn from each story presented whether they touch on your life, the life of someone who know or are simply a random story with no connection to you whatsoever.  They each portray “love” in a different way as well as its many outcomes.  Some for better, some for worse but such is life.

There is one warning I will give to potential readers….though classified as Young Adult I would strongly suggest it for teens (or older) at the higher end of the spectrum.  There’s quite a bit of blush worthy content and strong-ish language.  I mean I wouldn’t take it out entirely from the chosen genre as these are issues that teens deal with today, but I would proceed with a word of caution….just in case.

In the end, an enjoyable read that I just couldn’t seem to put down.  It’s not everyday you get to see both sides to any given story even in literature so it was rather refreshing to experience each one from all conceivable angles.  It added depth to decisions made, gave sense to things said, and really added that extra shine to an already intriguing idea.  This book was released a few weeks back and should be available on a bookstore shelf near you for your reading pleasure.

Special thanks to Lara at Chronicle Books for the review copy.  (THANKS!)  For more information on this title as well as their complete catalog, be sure to visit them online, ‘like’ them on Facebook or follow along on Twitter.

Until next time….spread the bookish love…and happy reading!
Posted by Gina at 11:13 AM

Oh, I've seen this book around but didn't know it was a selection of short stories. Definitely puts a new spin on my thoughts of it. Can't say I'm a fan of the cover, but the book sounds cute!

Melanie: I'm not certain I'd go with cute, but it definitely stands out. ^_^ As for the cover, I could take it or leave it...I definitely like the way it's structured though.

I like the sound of the book ans kinda like the cover too :) Good thoughts on this one!

Sounds like a good read. I also didn't know it was short stories. I could get into it!

La Toya: Definitely! They work REALLY well together too.

I loved seeing both sides of the story - too much fun :) Glad you enjoyed this one as well.