Book Bantering 101: The Templeton Twins Have an Idea by Ellis Weiner

Well hello there!
Fancy seeing you here on a day like today. 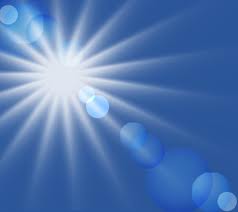 What do you mean you ALWAYS stop by?
I beg to differ…unless you’re one of those lurky type of visitors who swing through, read what’s new, and POOF, disappears.  Grant it, those visits are appreciated as well but it’s those that leave comments however brief that really feed by bookish soul.  Yep.  Each one is a tasty treat and fuels the old blogging machine…aka my brain…giving a boost to the desire and drive already residing there to continue bringing you the latest from my reading world.
So please, visit as you like…just remember, a few words from your allotment for the day can go a long way (unless of course you’re currently starring in that movie “A Thousand Words” in which case, please reserve your words for special occasions only).
Now, on to the review of the day…

Today’s title is a recent release from Chronicle Books aimed at Middle Grade readers but good for one and all, provided you have an imagination, good sense of humor and the ability to banter with a Narrator that will give you a run for your money.  Sound like your cup of tea?  Oh, it DEFINITELY was mine…even though I’m not a fan of tea exactly but that’s a post for another day.  Anywho, onward and upward or at least onward…today’s book of choice is… 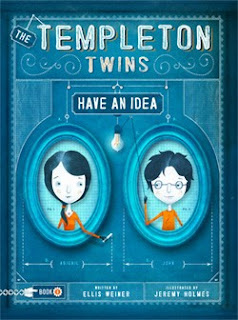 About the book courtesy of the Narrator…

Suppose there were 12-year-old twins, a boy and girl named (respectively) John and Abigail Templeton.

Let’s say John was pragmatic and played the drums, and Abigail was theoretical and solved cryptic crosswords. Now suppose their father was a brilliant, if sometimes confused, inventor. And suppose that another set of twins—adults—named Dean D. Dean and Dan D. Dean, kidnapped the Templeton twins and their ridiculous dog in order to get their father to turn over one of his genius (sort of) inventions. Yes, I said kidnapped. Wouldn’t it be fun to read about that? Oh, please. It would so.

Luckily for you, this is just the first in a series perfect for boys and girls who are smart, clever, and funny (just like the twins), and who enjoy reading adventurous stories (who doesn’t?!).

As the Narrator has dutifully informed us, there are several main characters both good and not-so-good, a decidedly ridiculous (though adorable!) dog, works of genius ripe for the taking, and a kidnapping plot that is bound to go awry.  Why?  Because I said so….don’t you hate it when someone tells you that?  No really, because the Narrator tells us as much on the back cover of the book.  Don’t worry, it’s not a spoiler point either because as much as the kidnapping seems like the news of the hour, there is much more going on than a half-baked plot to kidnap two industrious kids that are certainly too clever to be confined by the likes of the triple D brothers.  I mean really, would I spoil the story for you like that?  No; no I wouldn’t.  Now that we’re back on the same page, let’s get on with the show, shall we? 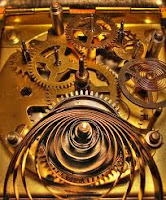 The Templeton twins, Abigail and John, and their father, the Professor, are an interesting family.  We start off learning the heart breaking reality behind the lack of a “Missis” in the story and in truth, that’s how the plot ball of wonder gets rolling.  The Professor’s lack of ability to reconnect with the world so soon after this loss is what drives him to relocate the family to Tick Tock Tech (love the name?  You’d love the set up of the campus as well….everything is very….punctual…) when the opportunity presents itself.  Too bad for him, it’s really one of those “too good to be true” moments because even with their recent acquisition of a ridiculous (-ly cute) dog, trouble will not be deterred.

Trouble arrives in the form of the Triple D brothers (okay, so that’s MY name for them, not their official names) and they aren’t just making waves, their wanting to make a NAME for themselves in a dishonest sort of way.  Yeah…not terribly bright these two though they try, might have helped if one of them had stayed awake in class when he bothered to show up at all...*ahem*…but I digress.  Their plans are big but the repercussions will be greater unless someone does something to stop them and QUICK!  (Notice I typed “quick” in capital letters there…I hope you read it with the urgent feelings it was to invoke.)  Not to worry because as we previously stated, the twins are on the case and with a thinker and a tinker-er, the job is sure to get done leaving the day saved and a good time had by all…well, almost all but that’s to be expected.

So you get the picture.  The story is good, the characters many but notable and the adventure is filled with equal parts creativity and genius…so yes, I would recommend it to one and all.  I…wait a second.  *rereads review*  Eek!  We’ve almost forgotten one very important topic (or rather person) of discussion…the Narrator!  My apologies.  Let’s rewind and start this last part over.


The Narrator.  What to say about this omnipresent character who is never really identified per se but gets us the inside scoop on what’s what, who’s who, where’s where and why’s why.  That IS a tough one…but I’ll give it the old college try.  I’ve heard some difference of opinion on the matter but I for one adored the voice of the Narrator and the bantering with us, the Reader.  (See, Narrator?  I know the distinction between us…although right now, technically YOU’RE the Reader if you’re reading this… ^_^)  Perhaps it was destined to be with the way I am, my style of reviewing or my particular tastes in reading (i.e. good….just kidding!  ^_^), but I think it added another element to what might have been an otherwise enjoyable story yes, but not nearly as much fun.  From the start, we are already experiencing his wit and wonder as he attempts to get the book off the page or rather words ON the page in a prologue worthy of the story.  Several tries later and TADA, we’ve found success, but the fun has only just begun.  From witty interactions and getting-to-know-you pages to a tasty sounding recipe for meatloaf (to be attempted with proper adult supervision only), the Narrator brings it all to the table and provides quite the spread!  Even reaching the end of a chapter is no need to fret as the “review questions” provided not only offer a surprising recap of events that transpired or skills gained (such as those needed for solving cryptics) but another chance to stroke the ego of…um, I mean properly express our gratitude for all the hard work the Narrator is putting into the story.  (^_^)  He really is a great guide to have and a fun verbal sparring partner I’m glad to have met.  Now on to my conclusion…

Wait, what’s that? I left out several key plot points in my review?  Well, duh!  Oh course I did…otherwise what would you and the Narrator discuss once you make his personal acquaintance in your own copy of the book?  Geesh.  I have to do all the supposing around it sometimes.  If you are curious though and would rather not end up like the cat in those unfortunate statements about curiosity (who thought of those anyway?  So violent!), feel free to check out the Scribd sample of the book below courtesy of Chronicle Books.  It’ll give you approximately 35 pages worth of the Narrator’s delightful commentary while making sure you’re thoroughly invested in the story and simply must rush out to obtain a copy of your own….don’t say I didn’t warn you!  ^_^

Pretty cool, right?  There’s more.  I was wandering around the official book site when I had one of those egads, what's this moments.  The cause?  A SECOND book is already in the works!  Yippeee!  _realizes people are watching_  I mean, I'll certainly be adding that to my wish list at once.  (Hehe)  In case you're the curious sort (like someone else we both know, namely moi), check out the sneak peek teaser type post that caught my attention...while I mark my calendar for September 2013 (…wait, 2013?  _faints_)

In conclusion (which can only mean that I’m drawing this fun-filled review to a close), a great start to a series that’s fit for all ages, from the middle grade reader and beyond and I for one will be reading every installment of.  Don’t believe me?  Just watch the blog…you’ll see.  I wouldn’t miss a minute of it for all the Frisbees at Tick Tock Tech…but if tempted with owning a FACAPPTWCOM (that’s “Foot-Activated Compressed-Air-Powered Page-Turner with Clip-On Mount”…in short, it lets you read and eat at the same time without interruption), I may need a moment to consider…

Review copy received courtesy of Allison at Chronicle Books.  (THANKS!)  For more information about this title as well as their complete catalog, feel free to visit them online, follow along on one of their Twitter feeds, pin them on Pinterest, or like them on Facebook.  To see just what other wordy works of wonder author Ellis Weiner has created or has coming soon, be sure to follow his Twitter feed.  Fan of the artwork?  All thanks go to the talented Jeremy Holmes; no really, the addition of his artwork really brings the story to life!  To see more of his work visit his creative studio, Mutt Ink.

Last but certainly not least, to discover more about Abigail and John (aka the TT's...aka the Templeton Twins) and the gloriously wonderful splendiforous Narrator, check out their site or send them a tweet!  That's right...an instant connection to all the fun (and snark) you could want.  So, what are you waiting for?  The review is over, the book is available now on bookstore shelves near you or through your favorite online retailer....go out and seek your copy because to be out of this loop is to align yourselves with the likes of the Dean brothers and we wouldn't want THAT now would we?

Sounds like a fun read and I love the cover.

O wow. I want it. You got me hooked at the first line.

It would be churlish for me not to offer an appreciation of this excellent review. That it fully acknowledges my contribution to TTTHAI goes without saying. More importantly--and unlike most other "reviews"--it bears witness to the fact that my contribution to the text is much more important than that of the book's putative "author," Mr. Ellis Weiner, about whose attempts to "hog" credit for the work I have commented elsewhere.

I thank the proprietor of this blog, I thank the commenters here who have expressed interest in the book, and most of all I thank myself, without whom none of this would have been possible. Thank you all, and, of course, thank me.