Miss Sally Ann and the Panther by Bobbi Miller

Today on Satisfaction for Insatiable Readers, we’re taking a look at a Children’s Storybook dealing with life lessons wrapped in an over sized package of tall tale goodness.  That’s right!  You remember the likes of Paul Bunyan and Babe the Blue Ox right?  Well this time, we’re checking out the life and times of Davy Crockett’s sweetheart (fictionally, of course) and boy is she a force to be reckoned with!  Ready to jump start this review?  Let’s go!  Today’s book of choice is… 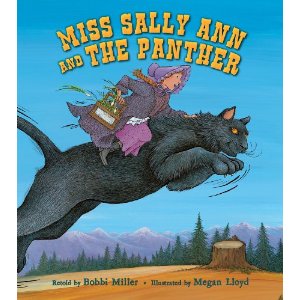 Miss Sally Ann Thunder Ann Whirlwind was a woman of wonder. She could rope a hurricane, outspin a steam mill, and blow out the moonlight in a single breath. But her finest adventure was wrestling Fireeyes, a mean-as-tarnation panther whose eyes glared fire. Both fall in love with each other's coats at first sight, and lickity-split begin fighting. Before long the fight turns into a true conbobberation, as they raise such a racket that the moon dips onto its side and the Milky Way curdles. But neither one backs down, backs up, or backs out . . .

….and yes, I cut the synopsis there; don’t want to spoil the read for you!

Ladies grab your prairie dresses and bonnets; fellas put on your boots and grab your trusty double barrel…because we’re heading to the old west.  Once upon a time, the prairie was ACTUALLY prairie (shock, gasp, and awe…I know).  Knitting was not merely a pastime, churning butter not merely reserved for the Amish, and gathering food was all in a day’s work.  Yes, simpler times indeed but not without their own set of rules…and risks. 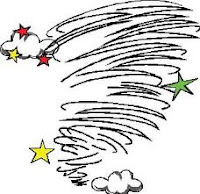 One day, when out gathering onions for her stew, Miss Sally Ann Thunder Ann Whirlwind (gotta love her name) was being followed by a GIANT beast with glowing eyes…and as it just so happened, a lustrous coat.  The same thoughts were in the creature’s mind as well seeing as it was winter and Miss Sally Ann was donning her best bear fur.  Oh dear…it seems we are at a crossroads as they each want what the other has and unfortunately for them both, neither one is the type to back down without a fight.  The envisioned tussle follows leaving them both exhausted and the landscape redefined, until something magical happens…and no, I don’t mean with actual “magic” per se.  One second they’re at odds and the next, a peaceful calm descends on the entire scene.  But what changed?

Now see, this was the only hanging point for me in the story; something that didn’t quite fit.  It almost seems as though the author expects the reader to assume what happened when they face each other eye to eye a second time and as an older reader, I get it; not so sure that the younger set would right off.  So, yes…that makes it a tinge hard to follow, but in another light, think of the questions it will evoke.  Anywho, back on track here…

As all the tall tales of our youth were meant to show us a bigger picture, this one is no different.  The change that occurred was that in understanding; a mutual respect for one another was gained in those quiet moments.  The knowledge that they could both get want they wanted with a little give and take blossomed like a wild rose.  They saw each other as more than a simple means to an end and thus a bond was created that would afford them both the best of what the other had to offer.  It’s quite clever actually and the final scenes will certainly bring a smile to your face as the wolves are lulled to sleep by the newly formed duo (a favorite past time of Miss Sally Ann).

Now as this is a storybook, we simply can’t forget to mention the artwork!  I must say the illustrations go a long way in sharing this tale as well, what with the incredible size and strength of Fireeyes (that’s the GIANT beast alluded to previously) and the incredible feats performed by Miss Sally Ann.  One scene in particular had me chuckling out loud, though I believe Fireeyes would certainly disagree with me.  It was during the skirmish with Miss Sally Ann and he “…let loose a roar so thunderific, skunks lost their stripes.”  Yep.  It shows him roaring alright…so much so that his mouth breaks through the log pane design on the page!  Nice touch.

﻿ ﻿
All in all, a curious tale that takes young readers on an adventure and winds up teaching them about the ways of the world.  It’s a great way to introduce the kiddos to the idea of sharing, bartering, and the like without the waning attention because they are engaged with the story; sorta that spoonful of sugar that’s said to make things go down easier.  Also, don’t be surprised if while reading you get a bit tongue tied because there are certainly a smattering of creative words strewn throughout the book.  Just think of them as a great chance to practice your phonics AND perhaps an engine to spark the creative juices in you and yours!

Review copy provided by author Bobbi Miller.  (THANKS!)  For more information on this title as well as her complete body of works, feel free to visit her online.  To discover the world of illustrator Megan Lloyd, check out her official site.  This book was released earlier this year from Holiday Books and should be available now on a bookstore shelf near you.

I love the beginning of your review btw, "grab your prairie dresses and bonnets; fellas put on your boots and grab your trusty double barrel…because we’re heading to the old west"!

Sounds like a delightful read, I'd love to be able to blow out the moonlight with a single breath.