Good morning (or whatever time it is where you are), everyone!
Welcome to another installment of Taste Testing Tuesdays here at Satisfaction for Insatiable Readers!  Taste Testing Tuesdays was inspired by 'Teaser Tuesdays', a weekly bookish meme, hosted by MizB of Should Be Reading.
On the menu this week...the thrilling conclusion to a Young Adult trilogy I've had the pleasure of reading from the start.  Ready for a taste?  Here goes!
~~~~~~~~~~~~~~~~~~~~~~ 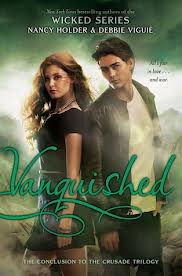 The scrying stone was so hot by then that as soon as he stopped the bike and leaped off, he dug in his pocket, grabbed the stone, and tossed it to the ground.  Blisters rose instantly on his fingers.  He grabbed the Uzi and whirled in a circle, such a mess of adrenaline, terror, and relief that he knew he had no real hope of using it.
-- pg 168

Whoa.
Yep, we definitely stumbled upon an action scene here...not that those are hard to come by or anything.  The one doing the whirling?  That's Jamie.  He's a hotheaded Irish dude that's been trained by the best in Salamanca to help rid the world of the vampires trying to gain control...and so far, succeeding.  *-*  But...he's just one spoke on this wheel and with the speed it's turning right now, I can't let go long enough to tell you more about it at the moment.  Gotta finish!  Stay tuned for my review coming later this month and watch for the official release of this one to the bookish world August 28th.
~~~~~~~~~~~~~~~~~~~~~~~~~~~~~~~~~~~~~~~~~~~~~~~

Wow! Sounds like they found what they were looking for or that thing is telling them they need to go find it. Great teaser! And a book I think I might want. :) Thank you!

Action packed is right. This sounds like an interesting series.

Bookborne: Certainly is...lots of adventure, action, challenges and the like....