We WILL rock you: For What It's Worth by Janet Tashjian

Hi guys!
Welcome back to another exciting day here at Satisfaction for Insatiable Readers.  Why is it exciting?  No reason in particular, just that it’s another chance for me to bring you something bookish and hopefully add a smile to your day.  ^_^ 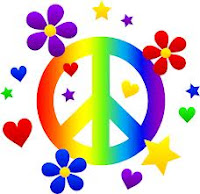 Today, we going back in time to the land of discos, one piece pantsuits, afros, and free love…or so I’m told.  Hey, I’m not quite THAT old, thank you very much but anyone who’s seen Forest Gump will have some idea of what this particular decade held for Johnny Q. Public.  That’s right, we’re heading back to the 70’s and the water feels fine so do the swim or your best “staying alive” dance and let’s boogie down to the groovy beats laid out for us in today’s Young Adult book of choice… 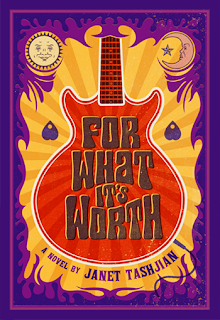 For What It's Worth
by
Janet Tashjian

The year is 1971 and the place is Laurel Canyon, California. Quinn, a fourteen-year-old music “encyclopedia,” writes a music column—called "For What It's Worth"—for his school paper. But Quinn’s world is about to change when he is faced with helping a war dodger and must make some tough decisions. When he starts receiving cryptic Ouija board messages from Jim Morrison, Janis Joplin, and Jimi Hendrix (all members of the 27 Club), he knows he is in over his head. Fortunately for Quinn, his new girlfriend Caroline helps him get a grip and channel his inner self.

With it's psychedelic cover groove worthy in both image and design, this book screams "PEACE, LOVE & ROCK 'N ROLL" if I ever saw one...BUT...and you knew there was a "but" coming, it's another case of getting more than you anticipated once you crack the spine.

It's the 70's!  A time of free love, the pursuit of whatever moves you, gratuitous" expressions of self" (read into that what you may), groovy musical discoveries and...war.  Yes, my friend; times may have been filled with peace signs and tie dye, but things were anything but peaceful.  Still waters run deep as they say and just below the surface, turmoil was brewing.  We were a nation at war with another country (can you believe it?  Sarcastic...sorry...) fighting for the rights of people that may or may not have wanted our help in the first place with the lives of our loved ones young and old on the line.  War is hard on any generation but this was one of the first times that the body bags piling up created such a stir.

Blame it on the loosened inhibitions.  Blame it on the free spirits running free.  Blame it on the rain...err, sorry; slipped into 80's/90's mode there.  *ahem*  The point is no longer were Americans content to simply be placed on the front lines for something they either didn't completely understand or believe in.  No longer did families want to risk the lives of their own for something that wasn't directly affecting them on American soil.  Can you blame them?  Not fully, but the atrocities that we were fighting against are another story entirely.  Anyway, before we get too carried away into the history and politics of it all, suffice it to say that the draft does play a part in the events that unfold, but only just.  Quinn's encounter with a draft dodger and the family connection that is forged when things come to light are inspiring no matter your views on the matter historically speaking.  Moving on...

Quinn is a great soul to know.  He tries, he really does but as in reality, his tries often miss their mark.  Does it make him any less worthy of our notice?  No way!  In fact, I like him better for it actually.  His inner turmoil on what’s right and wrong, his indecision in most situations, his intense desire to attain his short term (girlfriend) and long term (rock star status) goals; they all add up to one swell guy in the making.  Besides, how can you not love a character THAT involved in music!  I use to be fairly intense on that circuit (knowledge wise) and for the most part can still hold my own (SongPop game anyone?), in fact once upon a time someone actually participated in a local version of an “idol”-ized show (no judging).  Grant it, nothing became of it but it was fun (after I got over the oh-my-goodness-I’m-gonna-throw-my-guts-up-and-everything-else-with-it nerves of it all) and it didn’t diminish my love of the art as my music collection speaks for itself.  That’s the thing about music though…there’s a song for every occasion, every emotion, and if there’s not, there’s one begging to be written.  Such is the case here…and Quinn TOTALLY gets that.  Mad props to you my friend! 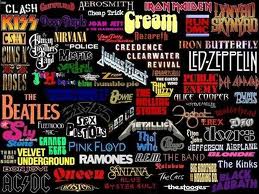 Now, the book is voiced by Quinn but not solely ABOUT Quinn; in fact there are A LOT of people that make their presence in his life known.  First, we have his equally music loving friends who definitely reap the rewards of their relationship not only due to his sparkling personality (*snicker*) but also from his massive record collection.  Then we meet the new girl in town, Caroline who goes from newcomer to friend, and then some, in no time flat.  Her penchant isn’t for music so much as the photography behind the album cover; a match made in heaven, no?  Then we move on to celebrities, which will leave you feeling like you’ve stepped into the Hall of Fame.

From Mama Cass and Frank Zappa, both of whom graced his home many times over (*checks on all you classic rock and 70s music buffs that may have fainted*) to Jim Morrison, Janis Joplin, and Jimi Hendrix who, although deceased even in the year we’re visiting, make cameo appearances and serve as a kind of occult version of Jiminy Cricket to the young lad.  How so?  Two words…Ouija board.  Now for those of you that are squeamish about these types of things, might I add that the only “creep” factor you may encounter is the board itself; the spirits that are there have come to help their musically inclined friend not harm…though his adeptness at interpreting those messages leaves much to be desired.  (Hey, even I thought they meant Caroline not…well, you’ll see.) It’s a mixed bag of red, white, blue, green, purple, and yellow that combine to make a tapestry of a cast you won’t easily miss.  Shall we draw things to a close?  I’m thinking yes…

At its heart, it’s a novel about growing up in trying times with a classic rock soundtrack to keep things squarely on the “Peace Train”.  Quinn is a great soul just trying to figure out his teen years with a family that just doesn’t always understand him, but will always be there for him…a point the author makes well and with just enough heart to bring the story to life one note at a time.  By book’s end, he earned my respect as I think he’ll earn yours as well.  Oh, by the way…the additional facts and trivia revealed throughout the story will keep history fans satisfied as well as inform a new generation about how some of the rock legends we still know and love today came to be.  Don’t believe me?  Well let’s see here…did you know that Alice Cooper’s real name is Vincent Furnier, he’s the son of a preacher and his adopted name is that of a 17th century witch?  Yup.  True story.  Far out, right?  ^_^

ARC for review courtesy of author Janet Tashjian.  (THANKS!)  For more information on this prolific author whose works can be found in both children's and young adult sections of your local bookstore, be sure to visit her online, like her on Facebook, or follow along on Twitter.  Side note...I simply LOVE how her website intro encourages visitors to "Feel free to explore, download, read, and maybe even write.".  Groovy indeed. This title was released in 2012 via Henry Holt and Company, an imprint of Macmillan Children's Publishing Group.  Recommended read for Young Adult fans both young and adult; another great addition to your “male lead” category especially for those reluctant souls hesitant to immerse themselves in the bookish world.  Who knows?  With the right riffs, anything can happen!

Great review! Love the sound of this one, especially the dead musicians advice given via ouija board! Groovy, baby! ;)

Actually I knew about Alice Cooper and I think he's from Pennsylvania...mid PA if I remember right. lol