BLOG TOUR: Eyes on You by Kate White

Hi guys!
Welcome back to the site that loves to bring something of value to the bookish table....Satisfaction for Insatiable Readers.

Today, we weighing the value of the spotlighted selection based on my (very) recent read through.  It's one of those titles that sits quietly in the Thriller/Suspense corner, allowing you to assume it's harmless...but...upon cracking the spine, you realize the full force of what you've unleashed.  Curious?  Thought you might be.  Ladies and gents, read this one with the lights on because it's just so plausible that you'll be glancing over your own shoulder and reconsidering acquaintances both old and new.  Today's blog tour guest and book of choice is.... 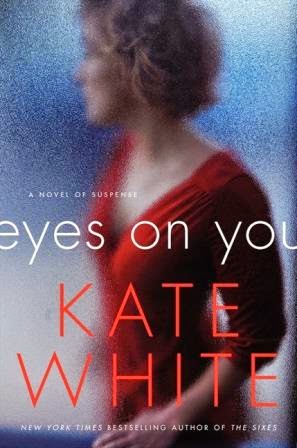 About the book...
What would you do if you began to suspect one day that someone was out to get you?  Really get you. But you had absolutely no idea who it was.
Robin seems to have everything going for her. After losing her TV hosting job two years ago, she’s back on the air in a hot new show with a co-host she can’t help but feel attracted to. She’s also penned a book that’s climbing the charts. But one night at a party in her honor, she discovers a nasty, threatening note in her evening bag.
Maybe, she tells herself, it’s just from a jealous party guest. But the threats and harassment soon escalate and Robin realizes that she has an adversary with a dark agenda. What’s even worse is that the person is clearly someone in her life. While she frantically tries to put the pieces together and unmask this hidden foe, it becomes terrifyingly clear that the person responsible isn’t going to stop until Robin loses everything that matters to her . . . including her life.

Yeah, when we're talking "escalate" we mean everything from bugs to acid, secret research and leaky (secret wise) coworkers to thinly veiled threats and shadows in the night.  It's enough to make one think they are crazy themselves...which again, wouldn't be too far fetched a thought considering.  Let's just say our leading lady, Robin, has a past with mental illness and abuse.  Have things finally just come to a head IN her head or is there a REAL threat to avoid at all costs unless she's looking to lose ten pounds in a hurry?  Only time will tell as the evidence stacks up both for and against this very notion....will YOU be quick enough to discover just who is behind it all?  (If not, no worries....you're just joining a cruise already in progress.)

Robin was a hard one to figure out.  She holds most things close to the chest (except her location which I found VERY at odds with her usual demeanor....and such a crucial thing too when all things are considered) due to her past and to break through that exterior, it takes hard work.  Some make it through easier than others...like Ann, her best friend, Maddy, her assistant and relative, Alex (hunky ex DA turned producer) and Carter (hunk number 1 that would be better associated action wise with "number 2", if you catch my meaning.  They are all there to support her and help her figure out just what's happening and whether or not she herself is to blame.  I can't help but fault both Ann and Carter for their reactions...especially when Alex, a relative newcomer, gives her more support.  Guess you never REALLY know about a person but boy oh boy when the proverbial you-know-what hits the fan, it's gonna knock you on your keister.

In conclusion, a tale of suspense and who-done-it that was truthfully executed rather well.  The author definitely employs the use of misdirection with an experts touch as you'll experience when trying to uncover just who is behind it all.  You'll cringe at some of the acts actually taken against Robin for whatever reason.  You'll ponder just who would be vindictive enough to try to pull it off and mostly succeed without a hitch.  When the final reveal comes, you'll be ready...though don't be surprised if the person you chose isn't selected. A book recommendation for Fiction fans, including those that prefer to wander into the Mystery section from time to time. 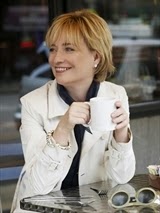 Kate White is the New York Times bestselling author of nine works of fiction—six Bailey Weggins mysteries and three suspense novels, including, Eyes on You, which will be published in June. For fourteen years she was the editor in chief of Cosmopolitan magazine, and though she loved the job (and the Cosmo beauty closet!), she decided to leave in late 2013 to concentrate full time on being an author.

Her books have received starred reviews from a variety of publications and she has been covered everyplace from The Today Show to The New York Times. Her first Bailey Weggins mystery, If Looks Could Kill, was named as the premier Reading with Rippa selection and soon shot to number one on Amazon. (And it’s now being made into an opera!). She is published in 18 countries around the world.
Kate is currently editing the Mystery Writers of America cookbook, a selection of recipes from many of the top-selling authors.
Like many mystery writers, Kate fell in love with the genre after reading her first Nancy Drew book, The Secret of Redgate Farm, and she still admires those cliffhanger endings that “Carolyn Keene” created.
She is married and the mother of two children, and once had her daughter stalk her through the woods so she could better describe the sounds of someone being followed.
Kate is also the author of several very popular career books, including I Shouldn’t Be Telling You This: How to Ask for the Money, Snag the Promotion, and Create the Career You Deserve, and Why Good Girls Don’t Get Ahead but Gutsy Girls Do.

This being a blog tour and all, there are other sites to see!
To sample what everyone has to offer, be sure to click around the blogosphere and check out the buzz.  Here's where this tour has been and is going to....

Special thanks to Trish over at TLC Book Tours for the chance to bring this title to all of you.  (THANKS!)  For more information on this selection as well as those forthcoming, be sure to click through the links provided within the post...you won't be sorry.  This title is set to celebrate it's bookish birthday JUNE 24th via HarperCollins, so be on the lookout for it on a bookstore shelf or virtual retailer of your choosing.  Can't wait?  Can't blame you.  PREORDER it today!

I enjoy the misdirection that many mysteries employ. I'm glad it was put to good use here.