Hello again!
Welcome back to post TWO for the day here at Satisfaction for Insatiable Readers.

Yes, it's a two-fer day and the field is split pretty wide between our first guest (a romance trilogy via Harlequin Presents) and our second...the likes of which I'm about to introduce.  This time around we're ushering in the fab team over at TLC Book Tours (Hi Lisa!) with a unique Memoir that's as much about one thing as it is the other.  Confused?  Don't be...or rather if you are, that's okay....we'll get things sorted out here in a second.  Today's blog tour guest and book of choice is...

This is the story of a young man growing up with type 1 diabetes....and he also happens to be gay.  Now the truly amazing part is that the latter plays second fiddle to the former, meaning that although he's trying to find his footing in life AND love, it's the pursuit of life, as in actual LIVING, that keeps allluding him most.

I really felt for him trying to come to terms with who he was overall and applaud his efforts at opening that proverbial closet door but as much as he shares in this part of his life, the medical side is just as if not more interesting.  The highs and lows of it all, the reactions and preparations, the possibly humiliating circumstances he found himself in time and again (and yes, some were PRETTY loathsome)....it all adds up to something that others can relate to, learn from, and just maybe not feel so alone.

It's all told in living color with a definite lack of sugar coating on the truths revealed.  You see how it really is having this diagnosis thrust upon you and though bad at any age, I can't help but think during those formulative teen years when everything else is going all wack-a-do, it's gotta be the pits.  Never knowing when an attack will happen.  Never going a day without pricking you finger multiple times in order to get that all important reading.  Never being able to just scarf down a candy bar or pint of Ben & Jerry's without pretty much counting on a seizure later.  I mean I'm not a big sweets person but still, the restriction, the feeling of having no control over your body....it's got to be frustrating.

In conclusion, this is a vivid account of just what it means to have type 1 diabetes...as well as a coming-of-age and coming-out story shared from the young man who lived through its point of view.  You'll laugh.  You'll cringe.  You may even be offended at times by his openness and honesty, but take it with a grain of salt, or crystal of sugar...life is life.  It's not always pretty, neat, and self contained.  Sometimes it gets messy and colors outside the lines.  We can either flee from it, or deal with it.   I don't know about you, but I'm all for dealing....

Recommended read for OLDER teens through adults due to some content.

Special thanks to Lisa at TLC Book Tours and their entire team for the chance to bring this blogosphere stopover to all of you.  (THANKS!)  For more information on this title as well as their future promotions, be sure to stop by their official site, like them on Facebook, or follow along on Twitter.  To discover more about the author, stop by his official site, or swing by his blog.  This title is available now, so be on the lookout for it at a retailer near you.  Now, this wouldn't be a BLOG TOUR if there weren't other stops along the way, so pay a visit to the official tour page to see where else this author has left his virtual footprints.

So....any final thoughts to share?
Comments to make?
Feelings to express?
How about an interest in checking the book out FIRST HAND? 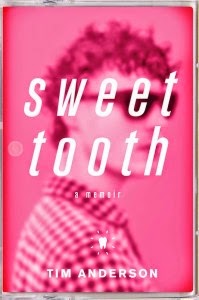 Well, if that last bit enticed you...now's your chance!
Up for grabs, ONE COPY of SWEET TOOTH by Tim Anderson courtesy of TLC Book Tours.

To enter, just submit your information below and BAM!
You're one step closer to calling this book your own.
(Open to US Residents only, no P.O. Boxes please.
Entries accepted TODAY through Saturday, July 5th at midnight CST.)

Thanks for being a part of the tour! I'm featuring your review on TLC's Facebook page today.