BOOK BIRTHDAY: Save the Date by Mary Kay Andrews

Hi guys!
Welcome back to Satisfaction for Insatiable Readers…the place that doesn’t frown upon your ever growing wish list; in fact, we ENCOURAGE it’s growth!

Today, we’re celebrating the release of the latest (perhaps, greatest….though only  YOU can determine that for yourself) release from an author known for her witty repertoire, funtastic characters, and the ability to instill hilarity in what could be otherwise tense situations.  My introduction to her work was in reading Hissy Fit…and I gotta say, after laughing my way through that adventure, I immediately added her other titles to my “must read” list.  Though still slowly gathering steam (and time!) to read all of them, my collection has grown and now…it includes this new release as well.  Ladies and gents, join me in wishing author Mary Kay Andrews a very HAPPY BOOKISH BIRTHDAY on her new release… 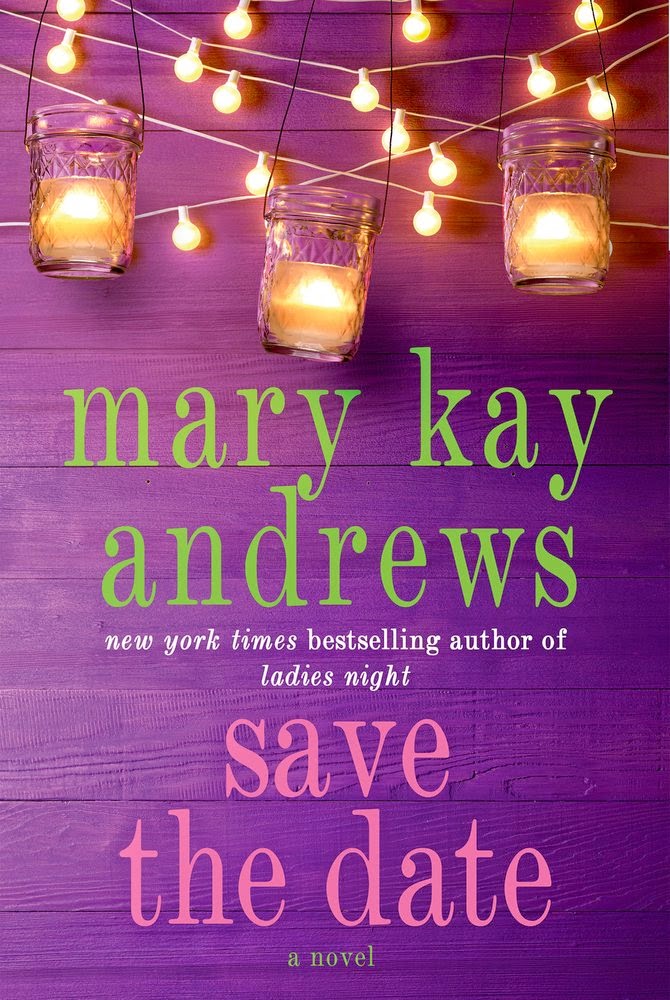 About the book…
A savannah florist is about to score the wedding of a lifetime—one that will solidify her career as the go-to-girl for society nuptials. Ironically, Cara Kryzik doesn't believe in love, even though she creates beautiful flower arrangements to celebrate them. But when the bride goes missing and the wedding is in jeopardy, Cara must find the bride and figure out what she believes in.  Maybe love really does exist outside of fairy tales after all.

Sounds to me like someone is getting a belief check…
…but you know, in the BEST WAY possible!
Well, hopefully…I mean I guess that IS sorta vague.
What if that MAYBE doesn’t turn into a yes?
What if that belief doesn’t directly impact her?
What if…I just read it and stop supposing.

Hehe.
My plan exactly….
…though coming a little later this month due to my previous obligations.  So, in the mean time, if YOU check it out….tell me how it goes, but you know, only SO much.
Don’t want to spoil the surprise or anything.

She also wrote ten critically acclaimed mysteries, including the Callahan Garrity mystery series, under her real name, Kathy Hogan Trocheck. Her mysteries have been nominated for the Edgar, Anthony, Agatha and Macavity Awards.
A native of St. Petersburg, Florida (and a diplomate of the Maas Bros. Department Store School of Charm), Trocheck earned a B.A. in journalism from the University of Georgia in 1976 (Go Dawgs!). She started her professional journalism career in Savannah, Georgia, where she covered the real-life murder trials which were the basis ofMidnight in the Garden of Good and Evil. She left journalism after a ten-year stint as a reporter for The Atlanta Journal-Constitution.

As a lifelong “junker” the author claims to know the location of every promising thrift store, flea market and junkpile in the southeastern United States, plus many parts of Ohio.

Married to her high school sweetheart, she is the mother of two grown children and a proud grandmother. After a brief hiatus in Raleigh, NC, she and her husband moved back to their old neighborhood in Atlanta, where they live in a restored 1926 Craftsman bungalow. She divides her time between Atlanta and her restored beach cottage on Tybee Island, GA.

ARC for review later this month courtesy of Meg at Tandem Literary and the folks at MacMillan Publishers.  (THANKS!)  For more information on this title as well as their complete catalog, be sure to stop by their official site, like their Facebook page, or follow along on Twitter.  This title is celebrating it’s bookish birthday TODAY via St Martin's Press, an imprint of MacMillan Publishers, so be on the look out for it on a store shelf near you.