Me on the Floor, Bleeding by Jenny Jagerfeld

Welcome back everyone!
This is Satisfaction for Insatiable Readers....the place to be bookish and feel right at home.

Today, we are continuing our weekend at the movies with a book that may or may not be a good fit for a movie, HOWEVER, it sure does remind me of one, in a much less violent and graphic sense of course.  First things first, here comes the featured title of the day.... 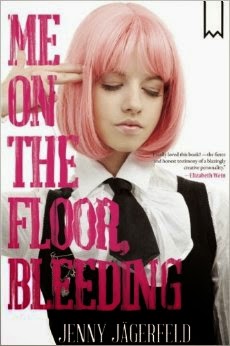 About the book....
Highschool-outsider Maja would never hurt herself on purpose as her dad, teachers, and classmates seem to believe. Can’t a person  saw off the tip of her thumb without everyone starting to worry? That is, everyone except Maja’s mum, who worringly seems to have disappeared from the face of earth.
Crashing a neighbour’s party, Maja meets twenty-year-old Justin Case, a super-verbal car mechanic with pink pants, who makes her forget everything about absent mothers and sawn-off thumbs, at least temporarily. But then Maja hacks into her father’s email account and reads an email that hurts more than all the electric saws in the world.

Now that we've become acquainted, let's dive into the realm of familiarity, or rather what movie this book reminded me of. 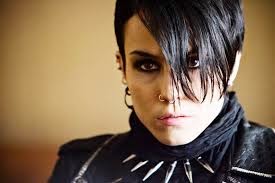 In a few words, it was THE GIRL WITH THE DRAGON TATTOO.  The writer of that novel was also Swedish (I believe...) and thus the film version was rather blunt.  It was bleak in its outlook, the characters took no prisioners while rarely if ever missing their target.  There is violence, though self inflicted and doubtful it was on  purpose. There is love...or at least the stirrings of.  There is deception as people try to hide things from the ones they love to protect them while in reality, it's making it worse.  There's a mystery to be solved that would be better left alone.  It has you running this way and that and quite frankly Maja's outbursts along the way just go about adding to the color of this already rainbow decked review.

In short, an unusual read starring a young lady that would rather stumble and fall than depend solely on someone else.  When her "normal" life takes a detour, landing her smack dap at the center of a mystery, she may not start off prepared, but by book's end, she's got it all (mostly) under control and learns more about herself and her family than she ever intended. Jenny Jägerfeld has worked in adult and young adult psychiatric care. She made her literary debut in 2006, and already her second novel, Me on the Floor, Bleeding was awarded the prestigious August Prize for Best Youth Novel in Sweden. Jenny Jägerfeld works with young adults through a long-running psychology program on Swedish national radio. Me on the Floor, Bleeding is her first novel translated into English.

Special thanks to Rachel at Meryl Zegarek Public Relations, Inc for the chance to share this book with all of you as well as the review copy.  (THANKS!)  For more information on this title as well as their other promotions, be sure to stop by their official site, or catch them on Twitter.  This title was released July of this year and should be on a bookstore shelf or virtual retailer of your choosing.