Today, we're exploring a Middle Grade Fiction title COMING SOON by an author whose no stranger to the YA and adult arenas.  What move him to try his hand at Children's Fiction?  Good question...but I'm not here to answer that one today.  I'm here to tantalize you with my adventure through the pages...and tantalize I shall.  Ready or not, here comes today's blog tour guest on the PRE-PUB PAR-TAY circuit... 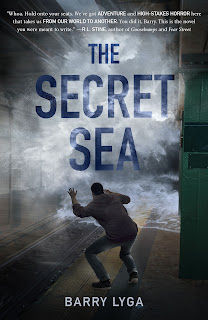 About the book...
Twelve-year-old Zak Killian is hearing a voice. Could it be a guardian angel? A ghost? No, that's crazy. But sometimes the voice is so real. . . . It warns him of danger.

One day Zak is standing on the subway platform when the tunnel starts to fill with water. He sees it before anyone else. The voice warns him to run. His friends Moira and Khalid believe this is more than a premonition, and soon all three find themselves in an alternate universe that is both familiar and seriously strange. As Zak unravels the mystery behind the voice, he faces decisions that may mean the end of their world at home—if they can even get home!

In his most propulsive and heartfelt book yet, acclaimed author Barry Lyga explores the depths of friendship, the bonds of family, and the nature of the universe itself.

This is a story of overcoming obstacles, friendships that last throughout time, and bonds that can not be broken.  It's about taking a leap of faith when no one else believes you because in your heart of hearts you know it's the only way.  It's about knowing loss without even knowing WHAT was lost, yet there's no way to tell your heart or mind any different, facts be darned.  It's about that little voice inside that screams to be heard...being much more than our own intuition...

Really and truly, it took me a while to get into this one; I mean hearing voices, phantom floods in the subway tunnels, and mysterious wanderings when asleep aren't the most visited reading topics on my reading list.  Every time I hear of this author's work, I am instantly drawn back to my initial experience with his writing...the book would be GOTH GIRL.  If you've never read it, I certainly recommend doing so...it'll leave quite an impression...but having that as my starting point for this work, only aided in my desire to hang tough because I knew, I just KNEW it would get better.  Guess what?  I was right.

Upon making Zak's acquaintance, we are thrust into a world of overprotective parents and strange happenings, though from the outside it merely appears as a health afflicted teen possibly having a melt down.  Once we moved on from merely hearing voices and possible echoes of another time (strange as those may sound), into physical interactions and piercing that magic curtain that surrounds our here and now, I was beyond intrigued.  A hop, skip, and a sleep-walking jump later and the kids find themselves in an eerie world; I mean, so much was like our present and yet SO much wasn't.  How our Moira survived it even for a few minutes without offing someone (not for lack of trying) was beyond me, and yet some of the other advancements were just what the doctor ordered for our health impaired leading man, Zak.  Khalid actually lucked out in the jump because of his gender and the bias of the times...odd when contrasted with the reception his and his father's name received in the present world.  (*grr*  racism is not the answer *grr*)

My favorite part would have to be in the final scenes when all felt lost and yet found at the same time.  I was so happy when the despair melted away for one of the kids and when hope flared to life even in the darkest hour.  My favorite character though would have to be Moira.  Don't get me wrong the dudes are great and have much going for them, but I loved Moira's personality, genius streaked with a heart of gold, and the fiery soul that couldn't let a good WOman take the things being dished lying down.  She was resourceful and an unexpected breath of fresh air into a world crumbling faster than a homemade cookie, and when you combine that with Khalid's wit, and Zak's heart, you've got an amazing trio capable of many things....perhaps even saving the world as they knew it.

In the end, while it was an eye opening journey for Zak, Moira, and Khalid, we readers are left with our own things to process, questions to contemplate, and feelings to let go.  The love and loyalty shown for family and friends was admirable...one could only hope to have that much conviction in our own relationships.  The strength of character Zak found within himself (with a bit of help from outside himself) was astounding and something we can strive for in our daily lives.  The prejudice uncovered in both worlds was jaw-dropping, and yet not entirely surprising...something that needs to change for future generations by the actions we put forth ourselves today.  The highs and lows, the risks and possibility of failure, all add up to an exciting ride upon that secret sea, and though our own journies upon it won't come for many moons, we can stretch our imaginations to ride the waves with these characters for better, or worse.  Recommended for older Middle Grade readers through adults, as it's got some pretty heavy material and heady topics for discussion such as life after death, familial bonds, and the flow of time.

Barry Lyga is the author of numerous acclaimed novels, including I Hunt Killers and The Astonishing Adventures of Fanboy and Goth Girl. He graduated from Yale University, then worked in the comic book industry for ten years and developed Free Comic Book Day. He lives in Maplewood, New Jersey, with his wife and their daughter.

Special thanks to Brittany at MacMillan for the ARC for review as well as the chance to bring this tour to you.  (THANKS!)  For more information on this title, the author, the tour, or the publisher, feel free to click through the links provided above.  This title is set to hit store shelves AUGUST 23, 2016 via Feiwel & Friends, an imprint of MacMillan, so be sure to stop by your local bookstore to reserve your copy or pre-order online.  Be sure to check out the rest of the tour as it makes its way through the blogosphere with a stop yesterday at Teen Librarian Toolbox, and tomorrow at Book Rook Review!

Glad you stuck with it! It sounds like it was worth pushing through the beginning to get to the good stuff. :)