The Resistance: Ignite by Tracy Lawson

Today, we're exploring the THIRD installment in The Resistance series from YA author Tracy Lawson.  While more often than not I'm of the opinion that books within a series can be read as standalone titles, this time around...I defer to the other camp, meaning READ THE OTHER TWO FIRST if you'd like it to make a lick of sense.  The backstory for the plot as well as the characters demands it.  Speaking of those characters, we've much to discuss and as introductions are generally more memorable at the start, please allow me to introduce today's ebook of choice... 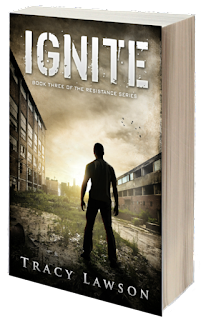 About the book....
The Greatest Risk Is To Take No Risk At All.

Nationwide food shortages have sparked civil unrest, and the Office of Civilian Safety and Defense’s hold on the people is slipping. The Resistance’s efforts to hasten the OCSD’s demise have resulted in disaster, with Tommy Bailey and Careen Catecher taking the blame for the ill-fated mission in OP-439.

Both teens struggle to survive the circumstances that force them into the national spotlight—and this time, they’re on opposite sides. On the run and exiled from the Resistance members in BG-098, Tommy makes his way to a Resistance safe house in the capital.

The OCSD is preparing to monitor all under-eighteens with the Cerberean Link, a device that protects them against hunger and sickness and can even locate them if they’re lost. Tommy’s now living in close quarters with Atari, an operative who has been assigned to sabotage the Link. But does Atari plan to use it for his own purposes?

Through it all, Tommy refuses to believe Careen’s loyalties have shifted away from the Resistance, and he’s willing to assume any risk to reconnect with her. Will they be able to trust each other when it matters most?

Pros....
Tommy is as stalwart as he's always been, if not even more so.  He proved himself time and again during the first two novels and despite an upset in book two (hormones...gheesh), he's dedicated hardcore to saving humanity from the OCSD...just not at the loss of Careen.  Gotta love a rebel with heart, right?  Speaking of Careen...

Our girl is back and her part to play is former-rebel-turned-downtrodden-yes-woman of the OCSD.  Say what?!?!?  Exactly.  It's hard to watch, I mean read, as they do everything in their power to extract the information they want from the only person in their reach able to deliver it.  Hang tough Careen....for all is not lost.  Continuing in this vein of positivity...

The plot is still spinning but not wildly out of control.  There's enough action to get your blood pumping but not so much as to misdirect your attention.  New players are being introduced to the group, but determining friend and foe is becoming much more difficult...even after you thought a few of them were set in stone. *dun dun dunnnn*

Con....
Careen...I hate to say it, but she was a pro AND a con.  While her outbursts and displays of aggression were definitely her, the timid creature that lies down when told, while not secretly plotting either revenge or escape was TOTALLY out of character for the pink highlighted rebel-esque girl we came to love.  I get it, she went through H-E-L-L at the hands of the OCSD freakazoids, but I didn't get a broken vibe from her, just a lack of muchness (to pull a word from AIW).  It was bewildering and really only got worse as things progressed.  Did it diminish my care for the character?  No...but it did make me want to slap her upside the head and yell what the hades are you doing...this isn't you!

In the end, I was a reader split between camps, but leaning a bit more towards that of fandom.  Though there were a few pitfalls this time around that stuck in my craw (there's a phrase I never thought I'd type), there were more plot points and moments of action that dazzled to keep me flicking screens...not to mention that ENDING!  Now I need to know if my instincts were right, or if I was duped as well!  I've stuck with Tommy and the growing gang this long, I'm not letting them shut me out before it all REALLY goes down!  Yes, that's right...whereas initially I thought this was a trilogy, there is still more to come.  According to the official website, it looks like THE REVOLT is coming 2017, so make room on your future reads list, because you know I will...

Special thanks to author Tracy Lawson for the ebook for review.  (THANKS!)  For more information on this title, the series, or those works forthcoming, feel free to click through the links provided above.  This title is available now, so be on the lookout for it at a virtual retailer of your choosing.

Thanks for reviewing Ignite, Gina! I'm so glad the twists and turns are keeping you flipping the pages--and Tommy's still your guy! Careen's been through the wringer, and some of her scenes in this book were hard to write. Will she rebound from everything she's been through? The explosive fourth volume, Revolt, will wrap up the series in summer 2017!