Today, we're playing host to a TLC Book Tours promotion starring a work of Historical Fiction via Crown Publishing.  It's a story that takes us back to the WWII era when men were scarce and women were finding many new roles to fill, whether they wanted to or not.  Hey, things had to get done and by golly, they weren't just gonna sit around and they couldn't simply wait around on the fellas out there fighting the war!  Right?  Well, it depends who you ask, but enough prattling on by me; let's get to the story! Today's blog tour guest and book of choice is... 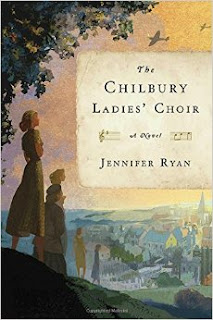 About the book....
“Just because the men have gone to war, why do we have to close the choir? And precisely when we need it most!”

As England enters World War II’s dark early days, spirited music professor Primrose Trent, recently arrived to the village of Chilbury, emboldens the women of the town to defy the Vicar’s stuffy edict to shutter the church’s choir in the absence of men and instead “carry on singing.” Resurrecting themselves as “The Chilbury Ladies’ Choir,” the women of this small village soon use their joint song to lift up themselves, and the community, as the war tears through their lives.

Told through letters and journals, THE CHILBURY LADIES’ CHOIR moves seamlessly from budding romances to village intrigues to heartbreaking matters of life and death. As we come to know the struggles of the charismatic members of this unforgettable outfit– a timid widow worried over her son at the front; the town beauty drawn to a rakish artist; her younger sister nursing an impossible crush and dabbling in politics she doesn’t understand; a young Jewish refugee hiding secrets about her family, and a conniving midwife plotting to outrun her seedy past– we come to see how the strength each finds in the choir’s collective voice reverberates in her individual life. In turns funny, charming and heart-wrenching, this lovingly executed ensemble novel will charm and inspire, illuminating the true spirit of the women on the homefront, in a village of indomitable spirit, at the dawn of a most terrible conflict.

Honest to goodness truth...
...I did not know if I was going to like this story when I first started.
GASP, shock, and AWE...right?
Well, it was for me...but let me explain.

The story is told entirely in correspondence, whether it be diary entries, letters to loved ones, or a pinned note to a community board.  Now I know right off the bat that would be enough to deter some readers (Yes, I'm looking at you Tracey ^-^), and while I'm not usually put off by this format, with the number of characters involved, and the number of voices telling the story as it unfolds, I was having a bit of trouble keeping up.  (Yes, one of my own Achilles heels is the multiple POV story.) HOWEVER, like a trooper I persevered, and was rewarded with a wonderful story that had a few more voices to lend than I prefer, they all felt genuine and had endeared themselves to me by book's end.  In fact, in order to TELL the story, one must KNOW the characters because while there are many threads, they are all intertwined.  See for yourself...

Kitty Winthrop...the youngest of the ladies in the choir, which a voice like an angel and a dream bigger than her little town can hold...
Venetia Winthrop...sister to Kitty, "it" girl of the town, and she's not afraid to flaunt her assets nor go after whatever she may seek...
Sylvie..."sister" to Kitty and Venetia thanks to the evils of war; she may not say much but when she speaks (or writes) it's worth more than all the idle chatter running about...
Mrs. Tilling...a midwife and woman who shouldn't be underestimated, especially when on the side of right... has a hand in resembling the Winthrop family...
Miss Edwina Paltry... also a midwife but more than willing to put any scrupels she may have aside for the right fee... tethered to the Winthrop's for better and worse...

Then there are those that starred in other's accounts versus having their own entries through which to ponder, sort, and shuffle their thoughts.  Among the most notable, we've Primrose Trent (Professor of Music at the university and initial guiding voice that inspired these women to lend their voices to the trying times all on their own), Mrs. B (who despised being called that but let me tell you, she was a force to be reckoned with!), Henry Brampton-Boyd (the golden boy/man of the town, whom most young ladies have their sights set on, but may not be as shiny as they believe), and Alastair (the man who captured someone's heart but may not be exactly who he pretends to be)...but that's still only scratching the surface.  Suffice it to say this is definitely a character driven novel for without these ladies thoughts and recollections, the story would remain merely a bunch of jumbled events with no timeline to decipher nor sense to be made in the senseless times they were living. 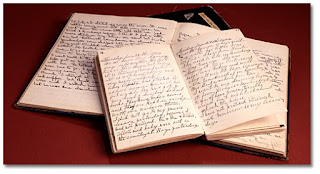 To conclude, I rather enjoyed my time in this little soap-opera-drama town and these lovely (for the most part) ladies feel like friends more than acquaintances. My only curiosity left behind at book's end, or rather an unfilled reader wish, would have been to hear back from those that were written to.  The conversation felt a tad one-sided in those instances and whether or not the lack of response was due to the times or writer's choice, I remain curious to know what the other's thought about the events transpiring in this little town.  Recommended for Historical Fiction fans who don't mind a little gossip now and then...

Jennifer Ryan lives in the Washington, D.C., area with her husband and their two children. Originally from Kent and then London, she was previously a nonfiction book editor.

Special thanks to Lisa at TLC Book Tours and the marketing team at Crown Publishing for the chance to participate in this promotion as well as the ARC for review.  (THANKS!)  For more information on this title, the author, the publisher, THIS TOUR, or those on the horizon, feel free to click through the links provided above. This title is available now via Crown Publishing, an imprint of Penguin Random House, so be on the lookout for it on a bookstore shelf or virtual retailer of your choosing.

Thanks for the review. I am eager to read this! There is quite a waiting list at my library.

I'm actually a big fan of this type of storytelling, so the multitude of letters and voices is a big draw for me.