Today, we're playing host to a TLC Book Tours promotions starring a recent release via William Morrow Paperbacks.  In fact, we're still pulling down the streamers as it just celebrated its BOOK BIRTHDAY yesterday and with the FIN-tastical story that awaits, ﻿I doubt it'll be sitting on the shelves in wait very long.  Ready, set, let's DIVE into today's book of choice... 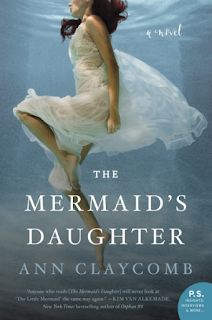 About the book....
A modern-day expansion of Hans Christian Andersen’s The Little Mermaid, this unforgettable debut novel weaves a spellbinding tale of magic and the power of love as a descendent of the original mermaid fights the terrible price of saving herself from a curse that has affected generations of women in her family.

Kathleen has always been dramatic. She suffers from the bizarre malady of experiencing stabbing pain in her feet. On her sixteenth birthday, she woke screaming from the sensation that her tongue had been cut out. No doctor can find a medical explanation for her pain, and even the most powerful drugs have proven useless. Only the touch of seawater can ease her pain, and just temporarily at that.
Now Kathleen is a twenty-five-year-old opera student in Boston and shows immense promise as a soprano. Her girlfriend Harry, a mezzo in the same program, worries endlessly about Kathleen's phantom pain and obsession with the sea. Kathleen's mother and grandmother both committed suicide as young women, and Harry worries they suffered from the same symptoms. When Kathleen suffers yet another dangerous breakdown, Harry convinces Kathleen to visit her hometown in Ireland to learn more about her family history.

In Ireland, they discover that the mystery—and the tragedy—of Kathleen’s family history is far older and stranger than they could have imagined.  Kathleen’s fate seems sealed, and the only way out is a terrible choice between a mermaid’s two sirens—the sea, and her lover. But both choices mean death…

Haunting and lyrical, The Mermaid’s Daughter asks—how far we will go for those we love? And can the transformative power of music overcome a magic that has prevailed for generations?

Okay, so here's the scoop according to yours truly...take it as you will.

I liken this story to a modern day version of The Little Mermaid.  No, there's no one seeking legs or a tail (exactly), and there's not some squid-witch combo cackling about with two electric eels for companions, nor a crab, fish, seagull trio of pals to help the non-existent (or is she?) mermaid find her true love.  So how pray tell is it a retelling then?  Oh, it IS, but we're not talking the Disney version of the tail, or rather tale, but the original WRITTEN story by none other than Nathaniel Hawthorne.  Surprised?  I know I was, but it didn't dampen my enthusiasm in the least...

Right from the start, I knew Kathleen was going to be someone worth knowing, as was our girl Harry.  There was just something about them, both individually and together, that made sense.  It was wonderful to watch how carefully they cared for one another, accepting the oddities, eccentricities, and unusualness that many mistake for flaws.  These two had their own "issues" in spades, but they didn't view them that way at all...it was simply another part of who they were, something to love as well as they could, and tackle together in whatever way made it most manageable for the other.  Kathleen had some serious strength of mind, body, and soul to deal with the curious blows life dealt her, and upon finding out more from whence it came, took it amazingly well.  I mean, I get it...her problems were validated even if the origins were a tad bizarre, but the inevitable outcome would have crushed many into bone dust.  Not Kathleen though...and especially not with the help of her father (Robin) and soul mate (Harry). Speaking of that soul mate, I know I mentioned the stoutness of Kathleen's heart, but my word, Harry had to be born a saint to bear what she's about to.  I don't know many that could, honestly, but it just endears her to us even more.

My only complaint, if may be so bold as to lodge one at all, would be to the length of the story.  I was good and ready, dug in completely mind and heart, trying to sort out just how things would go, what pieces fit together, and if there was any hope that any of our key players would survive the story, but at some point, the length of the tale became too much.  There were a few parts that felt stretched, a few too many meanderings into musical exploration, a tad too much detail regarding the creation of the perfect aria or other operatic piece.  Almost like one too many thingamabobs were collected, and the need to share them was so overwhelming, the author couldn't say no.  It didn't ruin the experience as a whole, but it was noticeable enough to mention.  So, once you start, hang in there...those few bumps in the road will level out so you can see it all play out.

To conclude, a story as fantastical as its origins and yet situated firmly in the here and now, walking that line between what's fiction and reality quite well...not an easy feat to attain and yet, it was. 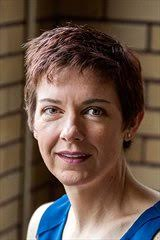 Ann Claycomb’s fiction has been published in American Short Fiction, Zahir, Fiction Weekly, Brevity, Hot Metal Bridge, The Evansville Review, Title Goes Here, and other publications. She has twice been nominated for a Pushcart Prize and has an MFA in fiction from West Virginia University.

Special thanks to Trish at TLC Book Tours and the William Morrow publicity team for the chance to bring this tour to you as well as the ARC for review.  (THANKS!)  For more information on this title, the author, the publisher, THIS TOUR, or those forthcoming, feel free to click through the links provided above.  This title is available now via William Morrow Paperbacks, an imprint of HarperCollins, so grab a copy from your local bookstore or online retailer of choice today!

Sounds like such a fun book! I love the Disney movie and would enjoy comparing the two.