Today, we're taking a walk through history, hand in hand with one of the female unsung heroes of science, more specifically...the field of fossils.  Always a fascinating study, whether in textbook reading or practice, but when you can connect the interest with someone that was and whose work still is, now THAT'S when you spark curiosity.  Speaking of curiosity, let's meet today's book of choice... 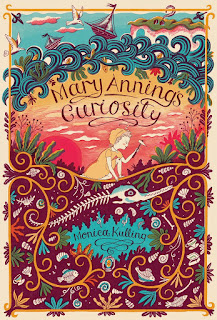 About the book...
Mary Anning, considered the world’s greatest fossilist, discovered her first big find at the age of twelve. This novel is an imaginative re-creation of her childhood in early nineteenth-century Lyme Regis.

Mary was born in 1799 in Lyme Regis, England, to a poor family. She and her older brother were the only two of ten children to survive. Her father, a carpenter and part-time fossil hunter, taught his children to look for fossils.

When her father injured himself and was unable to work, Mary quit school and took up fossil hunting full-time to help support her family, a task that became even more important when her father died, leaving the Annings in debt.

At the age of twelve, Mary, with her older brother Joe, found what they believed to be the skeleton of a gigantic crocodile, the Great Croc of the legends. Between dodging her rival fossil hunter, the Curiman, and the sheer work of carefully digging out the fossil, Mary took almost a year to excavate what would later be termed the Ichthyosaurus.

Mary Anning may have been uneducated, poor and a woman, but her life’s work of fossil hunting led her to make many discoveries that influenced our understanding of prehistoric creatures and the age of the Earth. In 2010, Mary was named among the ten British women who have most influenced the history of science. Charles Darwin even cited Mary’s fossilized creatures as evidence in his book On the Origin of Species.

A wonderful story that puts us inside the imagined days and nights of this curiosity seeking family from our real life history! You'll fall in love with little Mary and her never-say-die spirit that carries her from the classroom to her heart's desire, FOSSIL HUNTING...and in search of the fabled monster's remains. *DUN DUN DUNNNN*  Was it the popular choice? No sir (well, unless you count the opinion of one out to steal your claim)...although neither was a strong education for women at that time, but what's right for one may not always match up to the status quo and that, my friends, can lead us to discoveries and dreams come true we've only dared imagine.

Author Monica Kulling does a wonderful job of bringing history to life once again, making it accessible to the young and young at heart, with a fun filled story and additional learning options at book's end.  The efforts of illustrator Melissa Castrillon definitely do not go unnoticed either, as they give the words some visual depth, and add our imaginations in the "seeing is believing" battle. So, invite yourself along on an edutainment trip this summer and uncover a world you've only heard whispers of, right in your own backyard.

Monica Kulling is the author of over fifty books for children. Her most recent book is On Our Way to Oyster Bay: Mother Jones and Her March for Children’s Rights, illustrated by Felicita Sala. She has also written the popular Great Idea series, including In the Bag! Margaret Knight Wraps It Up. Monica’s work has been nominated for many awards, including numerous Silver Birch Express and Golden Oak awards. Her recent picture books include Happy Birthday, Alice Babette, Grant and Tillie Go Walking and The Tweedles Go Electric. Monica Kulling lives in Toronto.

Melissa Castrillon has a First Class Honors Degree in Illustration and a master’s degree in Children’s Book Illustration from the Cambridge School of Art. She is a freelance illustrator based in Cambridge, England. Special thanks to author Monica Kulling and the Groundwood Books team for the copy for review.  (THANKS!)  For more information on this title, the author, the illustrator, or the publisher, feel free to click through the links provided above.  This title is available now via Groundwood Books, an imprint of House of Anansi, so be on the lookout for it on a bookstore shelf or virtual retailer of your choosing.