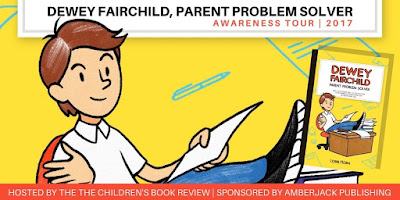 Today, we're joining The Children's Book Review team for a blog tour starring a new Middle Grade Fiction release via Amberjack Publishing.  It features none other than Dewey Fairchild...and though you may not know him yet, he's someone most kids would LOVE to know!  How so?  Well, as the title implies, he's a problem solver and since his specialty is of the parent variety, hello?!  Huge market!  ^-^ Ready to make his acquaintance?  Well then, who am I to stop you?  Ladies and gents, children of all ages, prepare to be amazed by the talents revealed in today's book of choice... 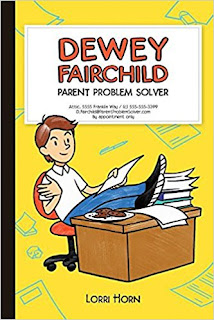 About the book...
Dewey Fairchild isn’t just good with parents, he’s great with them. He’s so good at handling parents that he’s built a thriving business out of it. He even has a secretary, Clara―a great alibi and an even better baker. Dewey settles the most troublesome of cases, from an overprotective mom who won’t let her child go to class on her own, to a dad who can’t stop picking his nose any chance he gets!

Dewey has no problem handling other people’s parents, but when he overhears his parents talking one day, he faces a challenge he never expected. Dewey can solve any problem parents may cause, but what will he do when the parents who are causing problems are his own?

He's just a kid himself, but he knows how to sort out parents...and with his trusty secretary, Clara (a sweet little old cookie baking lady caught up in all the drama...and loving it!), there's nothing he can't fix....yet.  What's a problem solver to do when the problem that needs solving...if his own? 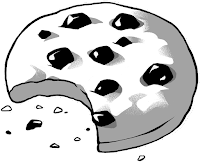 This was a wonderful little story with a great leading man.  He saw a need that needed filling, and filled it...with talent to boot, I might add!  Though the challenges his "clients" presented him ran the gambit of "my parent is a nose picking, belching, grossifying mess of himself" to "my mom brings new meaning to helicopter parent" and everything in between, he never made them feel anything less than important, anything less than top priority, and that's the attention he gave them.  He did the research, the legwork, the hiding and crawling for observations, and the pondering over fresh baked snacks (you rock, Clara!).  He was good at his self made job and happy to provide his services...until he was thrown for a loop with the "chilling" secret his parents were hiding.  Good thing he had a good head on his shoulders and could approach things logically.  *ahem*  Okay, so while that is the truth, it didn't happen quite so automatically.  It took the help of his circle of friends (two plus a pup and Clara) to bring him from the depths of defeat to the middle realm of hope, and from there, well...we all know the sky is the limit.

In closing, it was a fun read with a little something for all ages.  Kiddos will revel in the fact that they aren't alone in their "parent problems" while gleaning some insight into how to go about fixing them.  Adult readers will enjoy the glimpse into a childhood that isn't simply gotten through, but lived...and with relish, or rather tootsie rolls!  Dewey never backs down from a challenge, and neither should YOU!  While the outcome may not always seem in reach, sometimes we just need a new perspective to see the solution that was there all along.

Lorri Horn is an educator and an author. She has a degree in English, a teaching credential, has been Nationally Board Certified, and has taught pubic school for over 14 years. She loves cheese (and wants it to be its own food group, which made working on a vegan book a challenge), humor, baking, books, and spending time with her family. Lorri’s background as a career schoolteacher and instructional leader make her especially sympathetic to the needs and perspectives of children, and this sensitivity features in her work as an author. Lorri blogs on her website, lorrihorn.com. Her work has appeared in The Los Angeles Times, The Huffington Post, Phi Delta Kappan, The College Board and Mayim’s Vegan Table. Lorri lives in California with her husband, son, and their dog, Wolfie.

Agnieszka Grochalska is an illustrator living and working in Warsaw, Poland. As a child she wanted to be an astronaut or a jet pilot. Eventually she changed her mind and dedicated her keen eye and steady hand to drawing precise and detailed compositions reminiscent of classical storybook illustrations.

She received a MFA in Graphic Arts in 2014, exploring traditional painting, printmaking, and sculpting along the way. Currently she works predominantly in digital medium, striving to make it look as natural as her works drawn traditionally. Her illustrative works were featured in group exhibitions both in Poland and abroad.

Agnieszka enjoys travel and cultural exchange with people from around the world, referencing those experiences in her works alongside the Slavic folklore of her homeland. When she isn’t drawing or traveling, you can find her exploring the worlds of fiction in books and story-driven games.

Agnieszka’s works can be viewed in her online portfolio at agroshka.com.

Special thanks to Bianca at The Children's Book Review and the Amberjack Publishing team for the ARC for review as well as the chance to bring this tour to you.  (THANKS!)  For more information on this title, the author, the illustrator, the publisher, THIS TOUR, or those on the horizon, feel free to click through the links provided above.  This title just celebrated its book birthday at the beginning of the month via Amberjack Publishing, so be on the lookout for it on a bookstore shelf or virtual retailer of your choosing.

BEFORE YOU GO...
HOW WOULD YOU LIKE A CHANCE TO WIN? 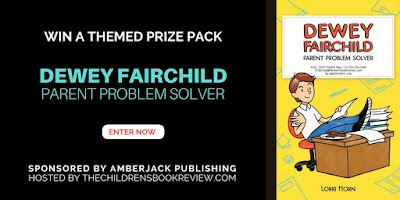 Having read the synopsis, I'm so glad that you found this book as good as I was hoping it would be.

A wonderful feature and giveaway.