Fragility is in the eye of the beholder... Butterfly Suicide by Mary Ann Loesch

Today, we're joining the Pump Up Your Book campaign for a self published Young Adult title that's much more hard hitting than at first it may seem.  True, the synopsis lends it the air of tragedy it deserves, but even that only gives a glimpse of the tale within.  Ladies and gents, grab a hold of your hats and your socks because they are about to be blown away.  Today's ebook of choice is... 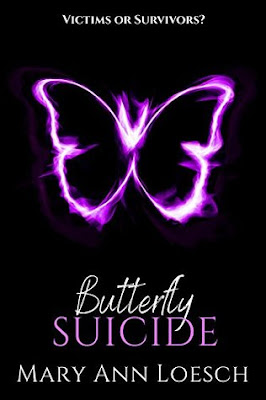 About the book...
The blood on the cafeteria floor has been washed away and the bullet holes plastered over, but those words carved deeply into the back of the worn auditorium chair will always be a reminder for the students of Rockingham High School of what happened there last May. For Stephen Valley, the brother of infamous school shooter Jude Valley, that day is one he will never be allowed to forget—especially since the small town blames him for the loss of the seven students killed in Jude’s rampage. Unfortunately, poverty has a firm grip on his mother’s finances, imprisoning him in the bigoted town with no options to leave.

Monica Monroe, a self proclaimed Theatre Nerd, hates being known only as the sister of Jude Valley’s murdered girlfriend, Simone. Even though she’s never believed Jude killed her sister over a lover’s quarrel, she does blames herself for not seeing what a monster he was. When she is partnered with Stephen for an acting scene in Theatre class, Monica views this as an opportunity to finally get some answers. Being paired with Stephen proves to be dangerous for her emotional well being and her heart. When he is beaten up for being on her street, Monica realizes his life after the actions of Jude has been as traumatic as her own.

Drawn together by tragedy, the two stumble across a shattering secret which threatens to ruin their blossoming romance and destroy their families.

My initial reaction was simply...WOW.
It was so much more than I anticipated and I loved the other points of view explored around such delicate topics. It's easy to villianize someone as part of a whole, whether it be culture, race, clique, circumstance or otherwise based, without seeing them, the individual, for who they are.  I mean, we're all guilty of it from time to time, so long as we correct those misconceptions, no harm no foul.  In this case, MAJOR harm, MAJOR foul, and most were none too quick to leave things as they were.  It took the strength of one girl, one that if they were going to jump to conclusions, no one would even bat an eyelash at because of her connection to the situation, to look beyond the frenzy, beyond the hurt of society, beyond her own pain, to see those affected on the other side.  Does it fix things?  No...not at first...but it does give some pause and that alone is sometimes enough to spark the change needed to find peace once again.

In the end, this book really gets to the heart of many issues.  From how secrets can destroy lives to judging people based on their own merits, not of those surrounding them, all while dealing with a terrible tragedy times two (or more, depending on how you're keeping count).  I was so proud of Monica for her reactions to things and how she kept striking out against the injustices being thrown in their faces even as she struggled to come to terms with the loss in her life.  I really felt for Stephen and, despite his tendency to lash out, couldn't really blame him for it either as others treated him as less than dirt.  It wasn't he who did the evilness, nor was it up to him to see the signs that may or may not have been there.  It's easy to point the finger at others, to pinpoint instances that should have been red flags after the fact, but to the thing we have to remember is that we only know part of the story. Without the full picture, we can't say anything with utmost certainty, and playing the blame game gets us nowhere in the here and now.

A moving piece for so many reasons...and one I would recommend to the older teen crowd and beyond. 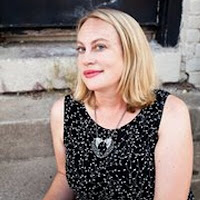 Mary Ann Loesch is an award winning fiction writer whose latest release, Butterfly Suicide, is now available on Amazon. Her urban fantasy romance Nephilim was published by Lyrical Press, an imprint of Kensington. Other titles include the paranormal romance Even This Shall Pass and the young adult books, Bayou Myth and Bayou Scar. Her latest short stories, Tales from Hell's Leak, are companion stories to Nephilim and available now exclusively at Amazon.   She loves feedback and reviews and encourages you to leave a review at Amazon or Goodreads.

Special thanks to Dorothy at Pump Up Your Book for the ebook for review.  (THANKS!)  For more information on this title, the author, or her other works, feel free to click through the links provided above.  To stay up to date on the latest with Pump Up Your Book, seek them out through your favorite social media channels.

Loving the simplicity of the cover.

Sounds like there are some strong characters which is great as I sometimes find novels like this get bogged down in the issues, the characters left almost as a secondary consideration.