Today, we're joining Rachel's Random Resources for a BLOG BLITZ starring a new Contemporary Romance title drenched in the latest fragrance and brimming with holiday cheer.  Okay, so maybe holiday HOPE would be a better word choice since our leading lady has quite a few struggles to go through in her killer red heels before potentially nabbing her man (hey, I'm not going to spoil it for you!), but hey, nobody said those things worth having were gonna be the easiest to obtain.  So, if you please, get ready for some holiday fun, and hoodwinks as we welcome today's book of choice... 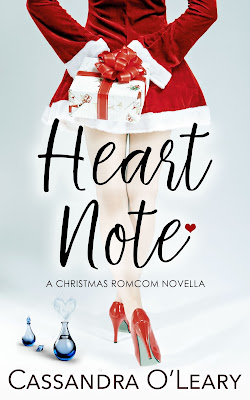 About the book...
Love is like a fine perfume. The top note draws you in, an instant attraction, but the Heart Note is the true essence. Like true love – a great perfume should be a woman’s perfect match.At least, that’s what perfume counter manager, Lily Lucas, tells her customers in one of Australia’s largest department stores. It’s almost Christmas, the store is bedecked with baubles and Lily has about eleventy billion gifts to wrap and sell. She and her team of spritzer chicks are glamorous, professional and hoping they don’t have to wear the hideous red onesies and reindeer antlers the store manager has in mind.The high point of Lily’s work life is Christos Cyriakos, ex-cop, security guard, possible Greek god. He's a mystery box she’d love to unwrap. But can she trust him?All Lily wants for Christmas is to kiss Christos (and more), catch a band of thieves running amok in the store, and live happily ever after. Is that too much to wish for? 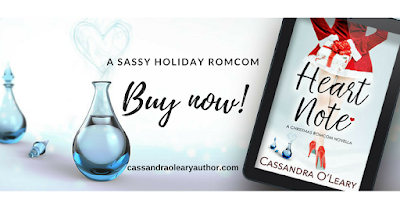 Now, I'm not normally one for shall we say overly ambitious holiday wear, but Lily Lucas really makes it work, and by work I mean she sees the absurdity of it despite the fact that she's having to wear it for the job she endures to pay the bills until her dreams are achieved.  Before your head gets in the gutter, it's not THAT sort of job.  Didn't you read the synopsis up there? That's what it's for silly!  She's a manager in the perfume portion of a Macy's-like store with a fill in position as a spritzer chick when needed...not too shabby, but her dream is to have her own perfumery.  One day, perhaps...but while she's seeking the smell of success, the heart note in her general vicinity is tall, dark, Greek-god-like, and...wait, where was I? 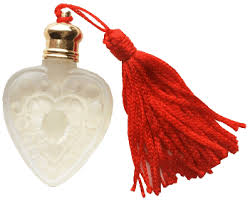 Enter one, Christos Cyriakos...Lily's own modern day knight in shining Armani-like suit from the moment their training class takes a turn for the worst (picture it...trust exercise, a rude instructor, and no volunteers to catch the lady's heart that is quickly falling...at least, until Christos steps in) to the final scenes of this little ditty of a story.  I'll be upfront with you, he's a bit of a puzzle.  One moment, he's all Mr. Flirty but gentlemanly still, the next he's jumping to conclusions faster than a track star after a title.  You'd think a guy with a background as a cop would get his facts straight before making judgments, but I suppose it adds the fault that makes him human instead of godlike; I mean, you need something to distract from his otherwise wonderfulness or what a BORING story THAT would be!

In the end, it was a fun holiday romp filled with merry making, mirth, and mischief.  The twist of SOMETHING BIGGER happening was unexpected, but still worked well for all intents and I gotta say, I did love that the ending didn't leave us in a lurch because really, a girl's gotta have some reward for being on the NICE list, right? 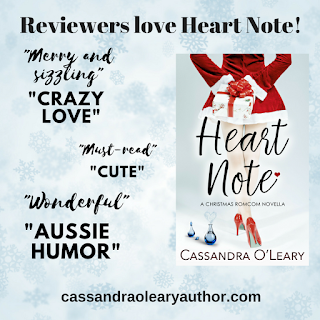 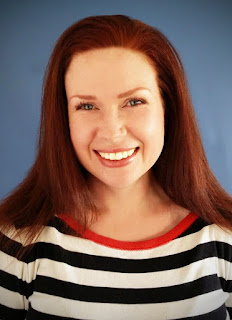 **Winner of the We Heart New Talent contest, HarperCollins UK. Nominated for BEST NEW AUTHOR in the 2016 AusRom Today Reader's Choice Awards for excellence in Australian romance fiction.**Cassandra O’Leary is a romance and women’s fiction author, communications specialist, avid reader, film and TV fangirl and admirer of pretty, shiny things. In 2015, Cassandra won the We Heart New Talent contest run by Avon Books/HarperCollins UK. Her debut romantic comedy novel, Girl on a Plane, was published in July 2016. Cassandra was also a 2015 finalist in the Lone Star writing contest, Northwest Houston Romance Writers of America, and a 2014 finalist in the First Kiss contest, Romance Writers of Australia.Cassandra is a mother of two gorgeous, high-energy mini ninjas and wife to a spunky superhero. Living in Melbourne, Australia, she’s also travelled the world. If you want to send her to Italy or Spain on any food or wine tasting ‘research’ trips, that would be splendiferous. You’ll find Cassandra online, drinking coffee and possibly buying shoes. Oh, yes. And writing.

Special thanks to Rachel at Rachel's Random Resources for the chance to bring this blitz to you. (THANKS!) For more information on this title, the author, THIS TOUR, or those on the horizon, feel free to click through the links provided above. This title is newly available this month, so click on over to Amazon to snag your copy today!

BEFORE YOU GO...
DON'T MISS YOUR CHANCE TO WIN 1 OF 5 ECOPIES OF THIS VERY TITLE IN THE TOUR WIDE GIVEAWAY! OPEN INTERNATIONALLY!