Today, we're shining the spotlight on a Middle Grade Fantasy adventure that's filled with MAGIC, DANGER, and all the bookish fun you could ever dream of.  Don't believe me?  Well then, that's your first problem, and without that belief, how exactly are you going to accept the magically infused truth I'm about to present...because trust me, this is one book you're not gonna want to miss!  Ready or not, gather your strength, muster your courage, and prepare to embark on a journey through the pages (quite literally!) with today's ebook of choice... 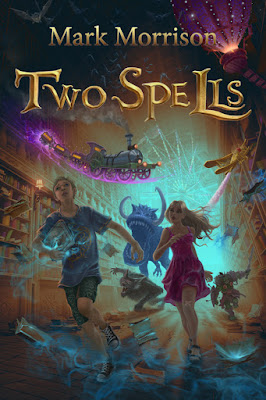 About the book...
Sarah and her twin brother Jon are heirs to an ancient magical realm and its most valuable treasure, an enchanted library. The library endows readers with the supernatural means of crossing into the uncharted inner-sanctum of the second dimension, inhabited with peculiar and sometimes perilous creatures.

The children are emboldened with a wondrous mystical gift that no other being has ever possessed. But fate intervenes and triggers a disastrous inter-dimensional war that disrupts the fabric of time and space spanning multiple universes, tearing destiny a new and savage pathway.

The two must rescue their world from a phantom hybrid alien race controlled by a demented dark-wizard, Jeremy Sermack. They will either assimilate or be exterminated.

Will they be the saviors the prophets spoke of, or will they retreat to the perceived safety of their distant homeland?

As fantastical as the cover looks, the story is TWICE as good!

Have you ever imagined being able to step INSIDE the stories you read?  Ever imagined experiencing the story FIRST HAND with your own eyes?  Feeling the breeze in your hair, the grass beneath your feet...the wolf with sharp teeth and palpable hunger breathing down your neck?  *gulp*  Okay, so maybe not that last part, but still...EVERY reader has thought about it at some point, but have you ever considered what the consequences would actually be?  I mean, think about it...the stories LIVE AND BREATHE between those pages, lives are lost, battles are won, journeys are taken, truths are uncovered, and a new soul in the mix would quite possibly irrevocably throw things off...well then, I guess it's a GOOD THING that we can't actually DO that, at least it is to the extent that is illustrated by our illustrious heroes here...

Sarah and Jon are definitely not the leaders you'd expect to take charge and bring a magical library back to order, but hey...it's not the size of the hero or heroine, but the heart, determination, and spirit...and these two got those in spades!  True, they're only now learning of their magical heritage, but they catch on quick, and a good thing too because those dark forces gathering are about to come to a serious head, and unless they are able to pull things together (along with a good amount of help from some new faces in their own stories), they'll be saying adios to them before they even get use to them!  I gotta admit though, despite the dangers lurking around every corner, despite the not necessarily pleasant surprises the pop up with the turn of a page (within the story), it's still be pretty cool to at least experience the story walkthrough...just once, not like those kids that were addicted to it.  ~shudders~

All in all, it was definitely a special story told with a lot of heart.  The author made the characters memorable with all their quirks and idiosyncrasies. It reminds us that no man/woman is an island unto themselves, accepting a helping hand is not a sign of weakness, and that magic exists in our everyday lives, if only we'll look for it.  Of course, it's easier to recognize when you keep circling a mountain and encounter a different story every time, but you know...that'd be splitting hairs.  😉  Highly recommended for Middle Grade Fantasy fans and beyond...

Mark [Morrison] was born number seven of eight children in a small town in Ohio. His family moved to Florida where he grew up, met an incredible woman, got married and raised four fantastic children, three boys and a girl.

Many years later, an empty nest left him to his true calling, storytelling. His first remarkable story is about a heroine whose courage and unrestrained personality—like his daughter’s—breathes passion and fervor into this adrenaline-packed story.

Special thanks to author Mark Morrison for the ecopy for review.  (THANKS!)  For more information on this title, or to snag a copy to call your own, feel free to click through the links provided above.  This title is available now in "e" and tree formats, so seek thee out a copy at your favorite online retailer.