So, A LOT has been happening offline with work (heading back to my store for a few weeks, woo hoo!), and the house (well okay, the "shell" as it is completely gutted out, but fingers crossed the insurance may start understanding the level of destruction versus their payout to rebuild), and online with me getting a better grip on my blogging world (as in learning to say "no" and "enough is enough")...total whirlwind, and feelings are running around and around like a moon round a planet.  Speaking of which...that reminds me...

Today's series in the spotlight may look familiar because, well, I DID feature a stop along its CLAWsome tour last week with a TOP FIVE KITS IN LIT post that was out of this world...in my humble opinion, of course.  ;)  Now, we're revisiting the "stranded" space kitty as he attempts to reclaim his home planet in a bid to be the ultimate overlord once again with not one, but TWO books detailing his evil plans...I mean, adventures!  Ready, set, READ ALL ABOUT today's titles of choice... 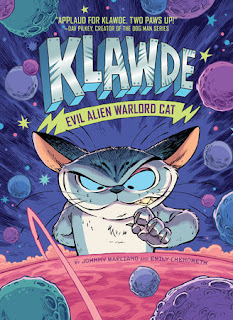 Picture it...
Planet Lyttyrboks.
The perfect place for all of kitty-kind to inhabit.  A world of peace and love, where clean litter happens on its own, food bowls never empty, milk is on tap, and...doors open with the touch of a paw?  Yep...and actually the beginning of that story spin was all fiction...more so than the book itself...because Planet Lyttyrboks was filled with cats, but of the highest intelligence, the ultimate caliber, and the fiendishly fiendish.  Their technology was light years ahead of ours, but their thirst for power was pretty much still in caveman times.  Ugg...me have fluffier fur than you...me better than you...mrow.  Yeah...advanced maybe, but definitely not without its flaws...which brings us to our leading feline....

His name was Lord High Emperor...or at least that's what others called him to his face because his given name was...Wyss-Kuzz.  (Get it?  Don't you just LOVE the play on words?!)  He had attitude, he had style, he had a thirst like no other to rule his fellow cats with an iron paw...and yet he was not invincible.  Despite the fact that I want to tell you everything, I won't because seriously, experiencing it first hand is like CATNIP to the soul!  The summary ends with his exile to Earth, his vague attempts to pass as a house cat (HA!  Totally laughable...) while trying to find a way back to his home planet to overthrow the new ruler.  Along the way he'll sample feelings, show utter disdain for his human (though Raj is an utter GEM! and going through so much of his own issues right now), dine disdainfully on earth cuisine (apparently pellet food is beneath him), and perhaps learn a thing or two he never anticipated...or not.  It's kind of a draw on that part, but trust me, it's a great start to a promising series that YOU SHOULD NOT MISS!  Which brings us to book two.... So, now we know Klawde, formerly known as Wyss-Kuz (Hahahahaha!  Sorry, too funny!), and *spoiler alert* how his former plan worked or didn't.  (Not telling!  Read it!)  This time, he's got a new problem, and a new earthbound nemesis to fight, and a newly crowned Lord High Emperor to overthrow (seriously, Flooffee-Fyr...HA!  Love it!).  Can he convince his human acquaintance (because friend is WAY to strong a word) to help him once again?  Or maybe he doesn't need his help, exactly, but his time, space, and resources...and some of those resources are ALIVE!  Yeah, think kittens are cute and cuddly?  Well, not when he gets a hold of them, although with that calico, I'm pretty sure something was already drawn to the dark side in that one...

Anywho, let's just say Klawde gets his whiskers in a tangle trying to stay one step ahead of his biggest nemesis while learning some valuable lessons along the way...whether he'll admit it or not...and truth be told, so does his human counterpart, Raj.  Though BOTH stories alternate chapters so we get to know each of them a bit better, I actually felt like this book somehow got us closer to Raj than the first.  I mean, the wilderness camp thing was pretty intense (book 1) as was what Klawde did for him (and still kind of for himself), but here we see Klawde's influence rubbing off on him, yet only the better parts.  Confused?  Don't be...it all works out...for MOST of them anyway...and those it doesn't kind of, sort of, really deserved what was coming to them.

ALL IN ALL...a grand adventure for the kiddos in the Middle Grade set and beyond!  If you've imagination, and a love of word play, you're gonna LOVE these books.

Special thanks to Friya at Penguin Young Readers for the copies for review.  (THANKS!)  For more information on either title, the series, or the publisher, feel free to click through the links provided above.  BOTH titles are available now via Penguin Workshop, an imprint of Penguin Random House, so be on the lookout for it on a bookstore shelf or virtual retailer of your choosing.