Today, we're taking a closer look at a title that released earlier this month via Shadow Mountain.  It's a Children's Fiction title, sat squarely in the center of the Middle Grade arena, and while it is Fiction, it was inspired by the author's life.  Sounds wonderful, right?  Well, the moment that inspired it...absolutely not...but what she did with that moment, how she turned it into something relatable for readers of all ages, and made it a message of positivity instead of ignorance?  Now THAT'S what is truly MAGNIFICENT.  Ladies and gents, allow me to introduce today's book of choice... 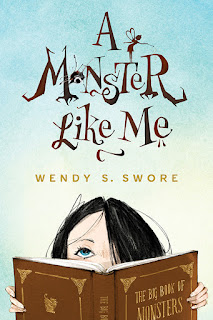 About the book...
There are trolls, goblins, and witches. Which kind of monster is Sophie?

Sophie is a monster expert. Thanks to her Big Book of Monsters and her vivid imagination, Sophie can identify the monsters in her school and neighborhood. Clearly, the bullies are trolls and goblins. Her nice neighbor must be a good witch, and Sophie’s new best friend is obviously a fairy. But what about Sophie? She’s convinced she is definitely a monster because of the “monster mark” on her face. At least that’s what she calls it. The doctors call it a blood tumor. Sophie tries to hide it but it covers almost half her face. And if she’s a monster on the outside, then she must be a monster on the inside, too.

Being the new kid at school is hard. Being called a monster is even harder. Sophie knows that it’s only a matter of time before the other kids, the doctors, and even her mom figure it out. And then her mom will probably leave—just like her dad did.

Because who would want to live with a real monster?

When we first met our little "monster", I just wanted to hug her. No one, especially a child, should feel like that about themselves...and what happened in the grocery store? I would have smacked the teeth right out of that woman's mouth. No lie.  I mean the audacity of some people is just beyond me!  Where did she think she had the right to say something like that to a anyone, let alone a child?!?!  I just...ugh!  *deep breath*  Anywho, moving forward...

Sophie is a special girl, and I'm not talking about her looks in the least.  She has a BIG HEART, a VIVID IMAGINATION, high level of INTELLIGENCE, and while she may depend on her 'Book of Monsters' a bit too much to get through life, there are worse things.  The biggest thing Sophie needed to learn wasn't just to let others think what they wanted and to be herself, but to SHARE her true self.  She needed to find her inner strength to say world, this is me...accept me as I am, or step aside.  She had those in her life to help her with that confidence boost, but she was so drawn into herself, so worried that even her mother would reject her, that she didn't open up...not truly...and while I'm not blaming the parent, at some point that conversation HAS to happen.  You can't just shy away from it on either side...you have to face it, own it, get down to the nitty gritty of it all, and decide just who you want to be.  Sophie was never the hemangioma on her face...she was a sweet girl that just happened to have a hemangioma.  BIG difference, but one only understood when things reached a crucial breaking point...

All in all, it was a wonderfully uplifting story with heartfelt messages to boot. I can't say I didn't cry a time or two...out of anguish (ignorant people befuddle me), and love (OMG...the wish...my heart!)...but still, Sophie is quite a remarkable, MAGNIFICENT young lady, and she can always be certain that the friendships she's made are genuine, true, and filled with love...just like her.  A great read for the kiddos just navigating the sometimes treacherous waters of growing up, as well as for older readers that need a reminder of how things are, could be, and should be, if only they had a little help from those with well placed intentions. Wendy S. Swore and her family are farmers. She writes part-time, particularly in winter when her farming chores give her time to plant seeds in her imagination. She is a member of SCBWI. This is her debut novel.

Special thanks to Jill at Shadow Mountain Publishing for the copy for review.  (THANKS!)  For more information on this title, the author, or the publisher, feel free to click through the links provided above.  This title is available now, so be on the lookout for it on a bookstore shelf or virtual retailer of your choosing.