Their love brought scandal and demons.


Lucy Easton, an aspiring novelist, will do anything to help boost her chances at publication—including betraying her family. But when she crosses paths with the charismatic Alexander Melling, her aspiration for success pales in comparison to the attraction she feels towards him.

Alexander is a young lawyer from a powerful family, striving to free himself from his father’s shadow. The more time he spends with Lucy, the more desperate he becomes to shed the secrets of his past—a past which can destroy the both himself and the woman he’s falling in love with.

While Alexander struggles with his past sins, Lucy must decide whether loving him is worth risking her own safety…and her heart.

From gossip magazines to gleaming Mardi Gras balls, Lucy and Alex navigate the Edwardian era in the Deep South with both passion and guilt.


“Taking notes on my church attending habits?” Alexander, dressed in a smart grey suit with a coordinating derby, stepped out from between two of the monstrous Doric columns that flanked the front of the cathedral.


“More like the lack thereof.” Lucy returned her items into her pouch and accepted Alexander’s arm.


“I was there, Lucy.” As they descended the steps, the smell of his sandalwood soap wafted over her like the first smell of peppermint at Christmas—delicious and invigorating. “I sat a few rows back, making sure you prayed when prompted, but I left twice as early to avoid any suspicion of us leaving together.”


They exited the wrought iron gate that enclosed the church yard and paused on the sidewalk.


“And just how discreet is strolling through town?”


“It’ll take the congregation a little while to catch up with our activities.” Alexander winked. “Would you like me to walk you all the way home or bring you to my house where we can pick up an automobile?”


“I’m fine with the two mile walk. It’ll give us more time together, though I’m sorry we live so far out of the way. My parents wanted a bigger lot than those in the city for all of us to run around freely when we were young. But don’t worry about me, I planned ahead.” She stuck the toe of one of her sensible black boots out from the hem of her dress.


“I’m pleased to know you aren’t a slave to fashion.” They went around The Cathedral of the Immaculate Conception and headed west on the paved sidewalk on Dauphin Street.


“When dealing with clothes passed down from three sisters from the previous century, it’s difficult to be picky.”


“You always manage to look beautiful, though I’ve often wondered why you don’t wear gloves like other ladies. Did your sisters wear them all out?”


Lucy’s laughter rang like a silver bell. “I have several new pairs, but my mother gave up trying to force me to wear them when I turned eighteen. I need my fingers free to hold my pen.”


Alexander smiled. “There’s nothing less personal than the touch of a gloved hand. I liked being able to feel you last night.” He placed his right hand on top of hers on his arm, allowing his fingers to briefly intertwine with hers. “I love how you shirk societal regulations, going to church gloveless and wearing old boots under a fine dress. Things like that shouldn’t matter, though they are often all that are discussed by women in your social circle.”


“My circle is smaller than most.”


“And that’s just the thing! It’s refreshing to see that you don’t fill your life with hollow relationships and cram your calendar with worthless events. Lucy, I’m honored you allowed my foot in the door of your cozy life.”


If they weren’t walking down the sidewalk midday, she would’ve kissed him. As it was, she waited until they passed another couple walking toward them, Alexander tipping his hat and nodding to them.


“Your whole self is invited into my world, Alexander,” she whispered.


A mischievous smile lit his face as Lucy gave him a look that communicated she wanted more of the passion he’d spoken to her about. He brushed his thumb over her cheek. “Soon.” 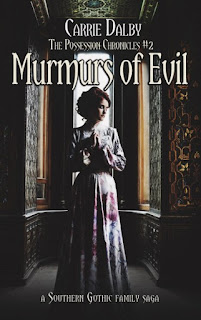 Murmurs of Evil
The Possession Chronicles Book 2
by Carrie Dalby

During the spring of 1906, Magdalene Jones is hired to be a companion to Ruth Melling at Seacliff Cottage, the Mellings' second home on Mobile Bay. Magdalene's simple country upbringing is no match for high society banter and a manor hour infested with demonic activity. Alexander, the Mellings' bachelor son, and Magdalene find themselves oppressed by demons playing upon their lusts. Claudio De Fiore--a young Italian deacon training to become a priest--and newly arrived from Scotland, Douglas Campbell, seek to protect Magdalene from the evil within the walls but they themselves might be part of the trouble.

Carrie Dalby, a California native, has lived in Mobile, Alabama, since 1996. She’s published several non-fiction articles in national and international magazines, served two terms as president of Mobile Writers Guild, worked as the Mobile area Local Liaison for SCBWI from 2012-2017, and volunteers with Metro Mobile Literacy Council’s annual Young Author events whenever possible. When Carrie’s not reading, writing, browsing bookstores/libraries, or homeschooling, she can often be found knitting or attending concerts.
Carrie’s two young adult novels are Fortitude(historical) and Corroded (contemporary). Fortitude is listed as a “Best History Book for kids” with Grateful American Foundation for its historical accuracy and being an engaging read for fifth through tenth graders.
Her current project is a historical Gothic family saga for adults, The Possession Chronicles. The first book in the series, Perilous Confessions, released in January 2019 from Bienvenue Press and the second book, Murmurs of Evil releases June 11, 2019.

Wow! What fantastic covers. I may have to break my no starting a series rule for these books. In fact, what the heck ... I'm away to add them to my wish list now.

Thanks for stopping by. The Possession Chronicles series (8 books) are all written, just in various stages of editing. They will be published about every four months. Book three releases in November, so the wait isn't too long.