Today, we're joining the folks at Chapter by Chapter Blog Tours for a stop along their current tour featuring an exciting work of Children's Fiction coming to you via Month9Books!  So, if you're ready for adventure, fun, danger, quests, and a whole lot more, join me as we take a peek between the pages of today's blog tour guest and title in the spotlight... 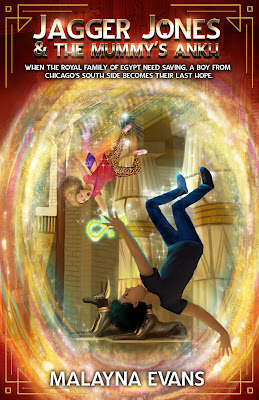 Jagger Jones and the Mummy's Ankh﻿
by
Malayna Evans
Month9Books

About the book...
Jagger Jones is a whiz kid from Chicago’s South Side. Ask him anything about Ancient Egypt, and Jagger can fill hours describing all that he knows. But when he and his precocious little sister Aria fall more than three thousand years back in time to the court of Amarna, Egypt, Jagger discovers a truth that rocks his world: books don’t teach you everything there is to know.

Mummies, pyramids, and cool hieroglyphics make awesome movie props, but the ancient court of Amarna is full of over-sized scorpions, magical amulets, and evil deities determined to scare unwanted visitors away. If Jagger and Aria are to return safely home, they must find nine soul-infested gemstones, defeat an evil general, save the royal family, and figure out how to rescue themselves!

Armed only with Jagger’s knowledge of history and a few modern objects mined from his pockets and Aria’s sparkly purse, the siblings have exactly one week to solve supernatural riddles and rescue the royal family. If they can pull it off, Jagger Jones just might return to Chicago a hero.

“We …” Brawny stopped suddenly. His fingers tightened on Jagger’s arm.
A chariot sped toward them.
“The prince!” Brawny hissed as he pulled Jagger to the side of the street and dropped to his knees. He yanked Jagger’s arm, forcing him down as Scrawny followed, dragging a squirming Aria. Brawny cast his eyes down, but Scrawny stared at the gold chariot hurtling their way, pulled by a white horse.
Aria fell to her knees beside Jagger. He leaned into her, heart thumping. He could feel her bag, which she’d slid under her white shift dress.
His mind raced. In the midst of chaos, there is also opportunity. The words of the famous Chinese general, Sun Tzu, thundered through his head.
This was his chance.
The chariot rumbled closer.
Just as it reached them, Jagger pulled away from the soldier and raced toward the horse.
Dust flew.
The horse neighed.
His sister screamed.
Green lights erupted to Jagger’s right side, and the horse reared back. Its hooves were so close to his head, Jagger felt the wind of the horse’s sudden lurch.
“Whoa!” The voice was young but gravely.
Jagger opened one eye. He was in the middle of the road, hunched up and frozen. But he was alive. He hadn’t been trampled by a horse.
“What are you doing?” A stern faced teenager jumped off the chariot. He looked like he was a few years older than Jagger and was covered in gold, from head to toe. Even his sandals were gold. He stared at Jagger through kohl-lined eyes over crossed arms. “What …”
Jagger sucked in a breath. He peeked over at Aria and realized even Scrawny had his head down now. Only Aria was looking up, hand to her mouth. When their eyes met, she jumped up, pulled away from the soldier, and ran to Jagger.
“My sister,” Jagger stuttered. “I mean … I’m sorry.” He dropped to the ground, mimicking the soldiers. He felt Aria kneel next to him and slipped an arm around her.
“What is the meaning of this?” the boy asked.
“I’m sorry, your, uh, sir.” Jagger had no idea how to address an ancient Egyptian prince. “I … uh …”
“You’re Tatia’s … I mean, Meretaten’s brother?” Aria was staring up at the prince, head quirked to one side. At least she hadn’t called the princess Merry Hot One this time.
Jagger braved a glance at the boy. His eyebrows were crawling up his face. His nostrils flared as he examined Aria, then shifted his focus to Jagger.
“And King Tut’s brother,” she added.
Jagger shoved his shoulder into her. How slow could she be? Even Aria should be able to figure out this kid was older than Tut. So for Tut to be king, this kid had to be dead.
“Smenkare!” Jagger shouted the name as it came to him. There wasn’t much scholarship about Tut’s older brother, who’d died young. “We know who you are, Prince Smenkare. Please ignore my sister. She’s delusional.” He squeezed Aria’s shoulder, willing her to shut up.
“What …” The prince shook his head in confusion and glanced at the soldiers, now crowded behind Jagger and Aria.
“We’re sorry, sir.” Scrawny was suddenly respectful. “We’re taking them to the General. He wants to talk to them.”
“The General?” Smenkare squinted.
“Yes, sir.” Scrawny kept his eyes down as he nodded.
“You’re telling me the General wants these two kids?” The prince twined his fingers together, eyes glowing.
“Yes, sir.” Scrawny nodded.
“Well.” The prince studied Jagger through hooded eyes. “Then the General shall have them.”
Jagger’s heart dropped. Maybe General Sun Tzu wasn’t as brilliant as his reputation.
“Thank you, sir.” Scrawny put his hands on Aria, and she twisted. “We’re sorry they bothered you.”
“No bother,” Smenkare drawled. “Put them on my chariot.”
“What?” Scrawny’s head wobbled. “Sir, the General is waiting—”
“I understand.” Smenkare hissed. “I said, put these two on my chariot. Now!”
The soldiers shifted back and forth, exchanging confused glances. Scrawny shook his head.
“Yes, sir.” Brawny pulled Jagger up, and led him to the horse that had almost trampled him. 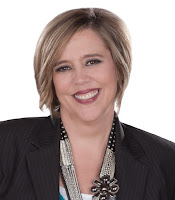 Malayna Evans is the author of the middle grade time travel series, Jagger Jones. Malayna earned her Ph.D. in Egyptology from the University of Chicago and has used her background to craft a tale loaded with historical details, attested ancient actors, and a magical adventure full of gods, mummies and wriggling creatures. Malayna enjoys a busy life of reading, writing, and playing in Oak Park, Illinois with her two kids, a spoiled rescue dog named Caesar, and a dwarf hamster named Pedicure.

Special thanks to Chapter by Chapter Blog Tours for the chance to bring this tour to you.  (THANKS!)  For more information on this title, the author, the publisher, or those tours on the horizon, feel free to click through the links provided above.  This title celebrated its BOOK BIRTHDAY May 28th, 2019 via Month9Books, so be on the lookout for it on a bookstore shelf or virtual retailer of your choosing.