Today, we're playing host to a stop along the Random House Children's Books tour for a NEW RELEASE you won't want to miss!  It falls in the Middle Grade genre of titles, and it's filled to the brim with ACTION, ADVENTURE, DANGER, and HEART.  For me, it hit very close to home, so much in fact that I was in tears more than once, but despite the bleary eyed interruptions, I couldn't put it down.  Ready or not, here comes today's book of choice... 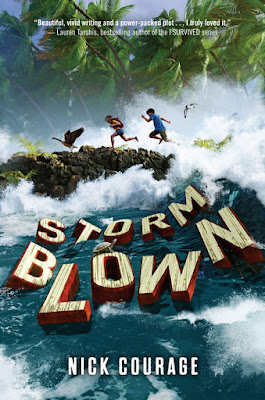 About the book...
A major hurricane is raging across the southern United States, and two unsuspecting kids are about to have the adventure of a lifetime! Perfect for kids who love high-stakes plots and natural disaster movies, and anyone interested in extreme weather!

A little rain and wind don’t worry Alejo–they’re just part of life at the beach. As his padrino says, as long as there are birds in the waves, it’s safe. When people start evacuating, though, Alejo realizes things might be worse than he thought. And they are. A hurricane is headed straight for Puerto Rico.

Emily’s brother, Elliot, has been really sick. He can’t go outside their New Orleans home, so Emily decides to have an adventure for him. She’s on a secret mission to the tiny island Elliot loves. She’s not expecting to meet up with an injured goose or a shy turtle. And nothing has prepared her for Megastorm Valerie. Soon Alejo and Emily will be in Valerie’s deadly path. Who will survive?


This story really took my breath away...and reading the Author's Note at book's end, totally explains why.  Aside from the author's writing talent (which is obvious to this reader), it seems they too have been in the path of these natural disasters... dreading its approach, hoping for the path to change, wishing to be missed and yet not wishing it on anyone else all at the same time.  For me, it went hand in hand with being able to aptly describe not only what was happening, but the feelings behind it...and from multiple angles no less!

As heart-wrenching as it was, I adored following the story from the multiple sets of eyes we were given.  With Alejo, we were able to see not only from a child's point of view, but from an islanders point of view...a distinct difference as they don't have the luxury of running to another state per se to escape the big bad weather phenomena.  We could see his confusion over the weather as it rapidly changed, feel the love he had for his grandfather as he determinedly followed the path of most resistance because it was also his heart's choice, and grow in respect for him as he lent the only hand he had to help another when things were at their worst.  Emily allowed us a peek into the lives of those that live in areas built up because they are gorgeous and profitable, and yet will always ultimately belong to Mother Nature.  My heart pained for how overlooked she felt, soared at her determination to bring joy to her ailing brother despite her protesting mother, and fell once again with her innocence when all heck was breaking loose...yet when the cards were down, she could be truly counted on.  Then we had Emily's brother Elliot, living a life sheltered thanks to his failing health, but unable to truly break free of those holds as he's still recovering his strength...thing is when all else failed, he did not.  Then there's the grandparents, parents, NCWC professionals, and a few random people woven into the story fabric...all utilized to round out the story because the way it's viewed, the way it's processed, the way it affects you, all depends on your perspective.  Speaking of which...

There were three characters you DIDN'T expect to "hear" from, but I was most pleased to see included in the role of narrator...the animal cast.  That's right.  Now, we're not talking about singing pigs, or dancing monkeys, but rather a petrel (seabird), a turtle, and a goose.  What?  Did you forget that these natural disasters affect the wildlife too?  Well, they certainly do...and while it may seem like escape would be hard for a turtle, but easy for a bird, think again.  What if they had a lame wing and flying was not an option?  What if they were swept up into the storm and simply couldn't fly back out?  The eye of the storm is calm, but the surrounding wall is where the most deadly winds reside.  Riding the currents will only take you so far, as will stamina.  Honestly, I think this portion of the story was just as tear inducing as the rest, but I appreciated its inclusion nonetheless.

For those that know me, or follow my blog closely enough, you know what happened back in October 2018.  What you might not know is that the aftereffects of that event linger on.  I'm not simply talking about a change in the natural scenery because yeah...the "skyline" has been changed indefinitely.  I'm not just speaking to the fact that SO MANY are still trying to rebuild their LIVES let alone their HOMES because that is most definitely still the case, and a struggle every day to find some sort of security.  I'm driving home the fact that long after the winds subsided, the surf turned calm, and the rain drained away, the EMOTIONAL scars remained...as they still do to this day and for the foreseeable future.  It doesn't matter if you are strong or weak, rich or poor, brilliant or average, beautiful or plain Jane...it can strike you out of nowhere, and it tears your world apart.

The label applied is PTSD...yeah, like soldiers in war have been known to be stricken with due to the horrors they've seen...but it can attach itself to ANYONE who goes through a particularly traumatic experience, and trust me, if you've been through one, you know just how traumatic they are.  The best way to combat it varies by the person.  Some need professional assistance, some chemical, and some simply time and a kind ear/heart to lean on.  I'm told it gets better with time...but just how much remains to be seen.  I think we all carry a bit of our history forward through time, whether we want to or not; we just learn the best way to contain it.

In the end, my review is WAY to long, but I regret nothing.  I highly recommend this book to the target audience and beyond.  It gives a well rounded look at a truly terrifying situation with encouragement for how we can help prevent this type of fiction becoming reality.  But, if I could ask the author one thing though, I know just what it would be.  WHAT ABOUT THE GOOSE?

Nick Courage is a New Orleans-born writer and aspiring skateboarder who splits his time between Brooklyn and Pittsburgh, where he lives with his wife and two cats. His work has appeared in the Paris Review and Writer’s Digest. When he’s not writing (or skating behind the library), Nick likes to ride his bike as far as he can–past the city, to the woods or the beach.

Special thanks to Alex at Random House Children's Books for the chance to bring this tour to you as well as the copy for review. (THANKS!) For more information on this title, the author, or the publisher, feel free to click through the links provided above.  This title is available now via Delacorte Books for Young Readers, so be on the lookout for it on a bookstore shelf or virtual retailer of your choosing. Be sure to check out the rest of the tour making its way through the blogosphere for more bookish fun!