Today, we're joining Rachel's Random Resources (again) for another fabulous tour (second of the day!) featuring the work of none other than Virginia Heath.  (Woot woot!)  In case you haven't been around recently, you may have missed my adoration for her writing, especially when it comes to the Wild Warriners series and more recently the King's Elite series.  Let me just say, I ADORE them...in fact of the one's I've already read, they've all been in ebook for tours (with this particular group, I might add), and then I promptly went out and ordered the print edition (which the house ate when Hurricane Michael came about, but then the UBER FABULOUS author herself sent a few my way to rebuild my coveted collection again...squee!)...including the little beauty we're here to celebrate today.

It's just celebrating it's BOOK BIRTHDAY, and while some series can get old after a while, losing its luster to seemingly fall into the shadows of previous releases, such is not the case here.  No...rather this series just keeps getting better with each release and while this is the last one of this particular set (boo hoo!), it doesn't sparkle any less with fabulousity.  So, ready or not, fair readers...here comes today's blog tour guest and title in the spotlight... 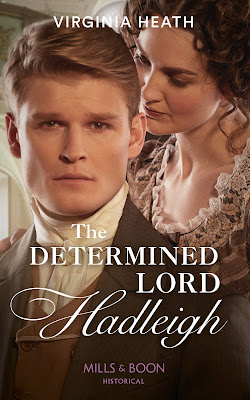 About the book...
Haunted by Penny Penhurst’s courage on the witness stand, meticulous barrister Lord Hadleigh offers her a housekeeper position at his estate. Despite trying to stay detached, Hadleigh is charmed by her small child and surprised by how much he yearns for this proud woman! Can this he break through his own – and Penny’s – barriers to prove he’s a man she can trust…and love? 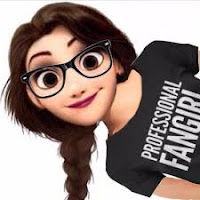 Yeah...so I don't break this picture out much, as it usually signals a less than coherent assemblage of words is about to follow because I simply couldn't stop raving about what I just read enough to gather my thoughts properly, but yeah...SO WARRANTED!

Honestly before Ms. Heath's series, I didn't read much Historical Fiction.  I don't want to say that I grouped it with the classic bare chested men clutching gasping women baring some cleavage of sorts of books, but yeah...I did...until I didn't.  No offense to those that love those "classics", but it just wasn't my thing.  One day I read about A Warriner to Tempt Her for a different tour with this very group, and I was...tempted...so I read an excerpt, and I was drawn in enough to give it try, I mean it's not often you read a book where a glimpse of ankle is enough to cause a stir.  *giggle*  Anywho, long story short, I took part in the tour and haven't looked back!  Which brings us to several books later and today's final release in her follow up series to the Warriners...the King's Elite...

This time around, we're finally seeking justice for all those who lost their lives, or livelihoods, thanks to "the Boss" and her merry band of troublemakers du jour whose ultimate goal was much loftier than simply smuggling spirits under the nose of the crown without paying taxes...and it all falls to the VERY capable hands of one Lord Hadleigh.  He's tenacious, meticulous, and detail-oriented to a fault.  He fights the good fight every day, and seeks to give a voice to those without one, whatever the reason may be, though there is a particular cause close to his heart, the closeness of which causes him to be somewhat shortsighted in his endeavors to help at times.  You see, he has a past that affects his outlook on life and his view of women, but not in the way you might think, given the times.  No, rather he is a bit more progressive than the ton, but he also sees damsels in distress and thinks they always need saving.  True, so do...but there are others that simply need out of their current situation, and then the chance to make it on their own.  Case in point, our leading lady Penny.

Former Viscountess, former thanks to her slovenly husband who got what was coming to him one way or another, and newly single mother, Penny is simply trying to make the best of a bad situation.  She's struggling, but making it work.  She has a good head on her shoulders, and a whole lot of heart, plus a plan to change her stars, so to speak, so when someone comes unbidden into her business and eventually her heart, it strikes the wrong chords entirely.  The good intentions behind the acts matter not...it's the principle, and she's not about to allow her path to be laid before her by anyone else ever again.  Only thing is the road can be an awfully lonely place...even if your own company is rather pleasant...and finding someone to share the journey with as equals can be life changing, but only if given the proper chance.  Can two souls who've seen the worst find the best in each other, and actually trust enough to let it blossom?  Only time will tell (because I won't!)...but let's just say, it's a good thing that neither gives up easily.


As I said, another FABULOUS addition to what's been a wonderful series.  Ms. Heath gives us another potential couple to adore, while gathering the pairings of the past for what could be the trial of the century.  There are pasts to overcome and futures to consider, inner demons to face and hard truths to admit, love to be found and forevers to reach for...and you get a front row seat to it all.  You'll smile with the highs, feel your heart clench at the lows, but all the while you'll hold out hope for the two to see through all that's standing in their way and finally reach that happy ending. 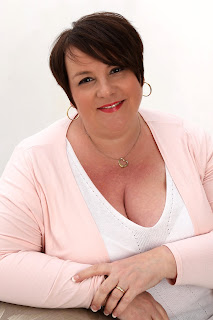 When Virginia Heath was a little girl it took her ages to fall asleep, so she made up stories in her head to help pass the time while she was staring at the ceiling. As she got older, the stories became more complicated, sometimes taking weeks to get to the happy ending. Then one day, she decided to embrace the insomnia and start writing them down. Despite that, it still takes her forever to fall asleep. 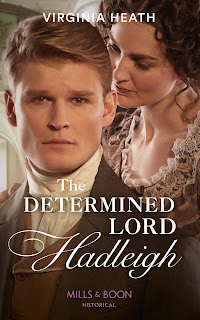 UP FOR GRABS...
1 of 2 e-copies of The Determined Lord Hadleigh by Virginia Heath
(Open INT)