Today, we're joining Rachel's Random Resources for a stop along one of their current promotions circling the blogosphere! It features a work of Fiction that doesn't shy from life's ups and downs, but rather embraces them for what they could be. I mean, in the eyes of the beholder, a goodbye can also appear to be a hello. So, ready or not, fair readers...READ ALL ABOUT IT... 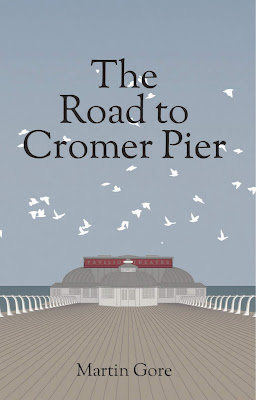 The Road to Cromer Pier
by
Martin Gore

About the book...
Janet’s first love arrives out of the blue after forty years. Those were simpler times for them both. Sunny childhood beach holidays, fish and chips and big copper pennies clunking into one armed bandits.

The Wells family has run the Cromer Pier Summertime Special Show for generations. But it’s now 2009 and the recession is biting hard. Owner Janet Wells and daughter Karen are facing an uncertain future. The show must go on, and Janet gambles on a fading talent show star. But both the star and the other cast members have their demons. This is a story of love, loyalty and luvvies. The road to Cromer Pier might be the end of their careers, or it might just be a new beginning.

In the quiet residents’ lounge at the Seaview Hotel on the promenade, Lionel Pemrose sat quietly picking his way through the documents that had arrived that morning. They were Administrator’s documents offering for sale the latest hotel in the town to go under.

Lionel knew the hotel trade intimately, having worked his way up from the bottom. He had been a pot-washer in a hotel near Ipswich at 14, and joined full-time at 16. He was a comprehensive kid made good. Having done every shitty job a hotel could throw at him, he had been promoted through the ranks to manager. He liked to think he could assess a hotel in a single visit. Was it clean? Had the rooms been updated or left to decay? What state was the bedding in? Did the staff have a rapport with the manager and, more importantly still, the customer? Could the chef actually cook? What happened on the chef’s night off?

He looked below one of the windows and spotted an odd-looking patch of wallpaper. He knelt down and probed it with his fingers. Blown plaster. He checked the rest of the windows in the lounge. Only an isolated spot, he decided. He took out his diary and made a note.

From across the other side of the bar, Jim Tyler smiled. It was typical of Lionel. When Jim had joined Pemrose Leisure, Lionel told him to sweat the little stuff because, if you did that, the bigger stuff took care of itself. Tyler knew that Lionel paid both him and the staff well. In return for this, he expected everyone who worked for him to have the same eye for detail. He carried out inspections without notice, and expected his managers to do likewise. Tyler knew that Lionel had fired people who didn’t follow his rules. He had no time for people who took their eye off the ball.

Tyler had seen both sides of this mercurial businessman. Lionel could be ruthless, vindictive, overbearing and a bully at times, and yet he managed to remember Tyler’s wife’s birthday and covered for him as he sent them away for a surprise weekend break. Tyler had given up trying to read this man.

Lionel even replied to each and every TripAdvisor review personally – an increasingly difficult task as the business grew. He not only had hotels now, of course. He also owned two amusement arcades and the pier. Well, part of it anyway.

As the rain lashed the windows, Lionel got up and looked out. The pier was being buffeted by the waves. He could see a lonely figure walking up towards the theatre. He knew who it was, even from this distance.

He poured himself a coffee and his steak sandwich duly arrived, courtesy of a trim waitress dressed in a tight, short skirt and the black uniform blouse bearing the gold Pemrose logo.

‘Can I get you anything else, Mr Pemrose?’ she asked, politely.

‘No thank you, Charlotte. That’s fine.’

She smiled and turned away. Lionel couldn’t resist checking her out as she left. If you only knew what you could do for me, he thought.

He returned to his papers as he ate. His belt buckle strained as he sat there, and he recognised that he’d put on weight once again. He immediately forced to the back of his mind the fact that stuffing the 800-calorie sandwich in front of him was unlikely to make him any thinner.

His telephone rang, featuring a Hammond organ playing ‘I’ve Got a Lovely Bunch of Coconuts’. He checked the caller identity and chose to ignore it. It was Mr Gillespie of Greaves Gillespie Insolvency. There were 24 hours left for expressions of interest in the bankrupt hotel and Lionel was in no hurry. In the current climate, there would be few buyers, so Gillespie would be getting nicely desperate as the deadline approached. Lionel’s offer would be emailed five minutes before the deadline.

Lionel had spoken to his friends in the trade to make sure that they knew he was to be the only one in the field, and the bank were supportive of the proposal at the pittance Lionel was proposing to pay. Doubtless it would be well below Gillespie’s expectation, but he would simply want to get rid as soon as he could and collect his fee. Business was brisk in insolvency. Lionel viewed such people with contempt.

He wouldn’t take on the staff, of course. He would simply buy the building. Gillespie could have all of the human resources hassle. He would promote Tyler to oversee the refurbishment and run it for him. A hard case was Tyler. He was a man after his own heart. They would close the place immediately and get the contractors to gut it so as to be able to open in the spring. He would seek his wife’s assistance in overseeing the new décor. She had a real eye for style. She said that Lionel was colour blind. Lionel couldn’t be bothered to disagree after all these years.

He’d visited the dying hotel the day before yesterday and realised that his luck was in. According to his surveyor, there was nothing wrong with the fabric of the building, and most of the bathrooms were in good condition, so it was mainly a paint and furnishings job. At a time when builders were laying off trades on a daily basis, he would secure a rock-bottom price for the refurbishment, and impose heavy penalties for late completion.

Lionel had learned a long time ago that adversity could be a friend if you ran a sensible business when times were good. He had a strong track record with the banks and was seen as a man who got things done. In the current climate of opportunity, Lionel had positioned himself well to take full advantage of the maelstrom. As far as he was concerned, a recession could be good for business. People would still go on holiday, but would stay in Britain. And Pemrose Leisure Group would be there to cater for them, with a brand new hotel in a prime position to boot.

But looking out to sea, he was still dissatisfied. The one prize he wanted was not for sale. At least, not yet.

A little more about Lionel Pemrose ...

Lionel is the arch villain of The Road to Cromer Pier. A local businessman and millionaire, he is superficially charming and affable. Self made and one of the people. He has free ice cream vouchers in his top pocket, which he gives to smiling holidaymakers. But he didn’t get his growing empire of hotels, amusement arcades and restaurants by being nice. He has a dark side and sees the 2008 depression as an opportunity to gain the only prize in Cromer to elude him – the Pier Theatre.

I wanted to show all sides of the charismatic Lionel, because most people have good points and bad, and if I didn’t he would just have become a caricature, like a pantomime villain. This excerpt, taken from early in the book, brings the reader up to speed with what makes Lionel tick, and how he operates. In the end I think I’ve developed a certain grudging admiration for his good points..... 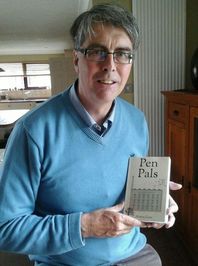 I am a 61 year old Accountant who semi-retired to explore my love of creative writing. In my career I held Board level jobs for over twenty five years, in private, public and third sector organisations. I was born in Coventry, a city then dominated by the car industry and high volume manufacturing. Jaguar, Triumph, Talbot, Rolls Royce, Courtaulds, Massey Ferguson were the major employers, to name but a few.

When I was nine year’s old I told my long suffering mother that as I liked English composition and drama I was going to be a Playwright. She told me that I should work hard at school and get a proper job. She was right of course.

I started as an Office Junior at Jaguar in 1973 at eleven pounds sixty four a week. I thus grew up in the strike torn, class divided seventies. My first career ended in 2015, when I semi retired as Director of Corporate services at Humberside Probation. My second career, as a Non Executive Director, is great as it has allowed me free time to travel and indulge my passion for writing, both in novels and for theatre.

The opportunity to rekindle my interest in writing came in 2009, when I wrote my first pantomime, Cinderella, for my home group, the Walkington Pantomime Players. I have now written eight. I love theatre, particularly musical theatre, and completed the Hull Truck Theatre Playwrite course in 2010. My first play, a comedy called He's Behind You, had its first highly successful showing in January 2016, so I intend to move forward in all three creative areas.

Pen Pals was my first novel, but a second, The Road to Cromer Pier, will be released in the Summer of 2019.

I’m an old fashioned writer I guess. I want you to laugh and to cry. I want you to believe in my characters, and feel that my stories have a beginning, a middle, and a satisfactory ending.

Special thanks to Rachel at Rachel's Random Resources for the chance to bring this reveal to you. (THANKS!) For more information on this title, the author, this promotion, or those on the horizon, feel free to click through the links provided above.  Be sure to check out the rest of the tour going on now... 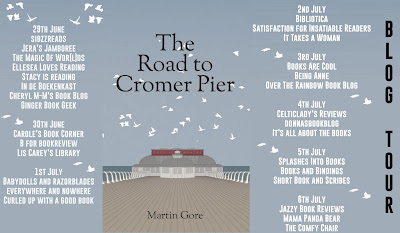 This novel sounds captivating and wonderful. Love the story and the characters. It sounds realistic and impressive.