HI there!
HAPPY HALLOWEEN from Satisfaction for Insatiable Readers.

Today, we're serving up a little spooky fun book style with a new(ish) release via Disney-Hyperion!  It's been making its way through the blogosphere this month with Rockstar Book Tours and today is MY day to share the curiosities, the mad scientist mayhem, and ultimately the power that we hold within each of us to fight the good fight!  Ready or not, join me in this Middle Grade adventure as we welcome today's blog tour guest and book of choice... 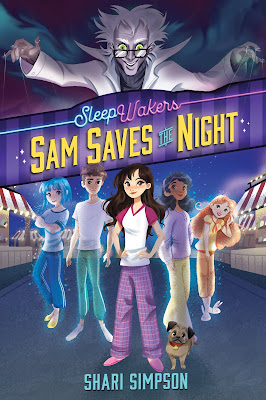 About the book...
What would you do if you could stay out all night and not get in trouble?

Thirteen-year-old Sam has no friends, but you can't really blame her. She lives her life in a state of chronic exhaustion thanks to her nightly sleepwalking jaunts, which include trips to the store, treehouse-building projects, and breaking-and-entering escapades-none of which she remembers in the morning. Her condition is taking its toll on her family (and her life), so when her mom takes her to see a wacky strip-mall sleep specialist, Sam is wary, but 100 percent in.

The night after the doc works his mojo, Sam wakes up outside her body, watching herself sleep. FREAKY! But once she gets over the panic attack, she realizes there's a whole world of detached-souls out there, called SleepWakers-cliques of kids like the Achieves, who use their sleep time to learn new things; the Numbs, who eat junk food and play video games all night long, and the OCDeeds who search for missing things and organize other people's stuff. And then there are the Mean Dreams, led by Madalynn Sucret, the nicest girl in Sam's school, who shows Sam that she can use her power to get back at a bully who's been tormenting her. Sam is intrigued-until it becomes clear that Madalynn is the real bully and the "tormentor" is just, well... sad. Now Sam is faced with uniting the various tribes of SleepWakers to fight back against Madalynn and the Mean Dreams in the most epic battle the night has ever seen.

This was SUCH a FUN read!

Okay, so sleepwalking is nothing to joke about.  I mean, I'm sure most of you have heard some crazy stories involving things that people have done while extraordinarily sleep deprived, and they say waking a person the is caught in this state should be done ever so delicately or even avoided (if possible) at all costs.  It sends a shock to the system as the brain tries to catch up to what's going on...well then riddle me this.  How much of a shock do you think our little leading lady had to deal with when she was found building a tree house, complete with the use of a chainsaw and other various tools, in a GIANT tree in the dead of night...ALL...WHILE...SLEEPWALKING.  Exactly.  An EXTREMELY RIDICULOUS amount of shock at the very least...or not.  Why?  Well, it was an unfortunate normal for Sam, but it didn't make it any less dangerous, any less something to be concerned with, or any less a thing about herself that she would change in a heartbeat.  Well, at least until one sclera challenged scientist (only slightly mad...for the most part) gets involved and things start to...change...

Honestly, I was fascinated enough with her nighttime adventures that when this new level of curiosity inducing drama was introduced, I was so in the zone that I couldn't stop turning pages!  I mean, what WOULD Sam do next?  Would the "doctor" save her?  Were the unusual side effects of the study something to worry about?  What would Sam do with her new curious "powers"? Who would her delightful pug-gy friend cuddle next? Oh yeah, and just who was this Madalynn Sucret and what hold did she have on everyone?  There were SO MANY questions, and only so many answers, but hey...that leaves room for more exploration in future installments, which I for one CAN'T WAIT FOR!

A great reading recommendation for this Middle Grade Fiction fans this reading season or any for that matter! 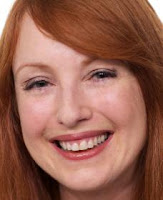 Shari Simpson is a playwright and screenwriter who cowrote the off-Broadway hit Maybe Baby, It's You and the Disney Channel Original Movie The Swap, both with her longtime writing partner, Charlie Shahnaian. She also won the 2012 BlogHer Voice of the Year for Humor Writing. Shari lives in Hoboken, NJ, with a patient husband, two hilarious teenagers, a demonic cat, and her pug, Mila Kunis. This is her first novel.

Special thanks to Rockstar Book Tours for the chance to bring this tour to you. (THANKS!) For more information on this title, the author, the publisher, this tour, or those on the horizon, feel free to click through the links provided above. This title is AVAILABLE NOW so check your local bookstore or a virtual shelf near you to snag your copy today! Be sure to check out the rest of the tour for more bookish fun...

Sounds like a fun read (and I love the cover). Like the little leading lady I too sleepwalk though thankfully have never found myself building a tree house, complete with the use of a chainsaw and other various tools, in a GIANT tree in the dead of night.