Today, we're shining the book spotlight on a title on tour now with Rachel's Random Resources.  It's a book that reminds me of a certain Exotic Magnolia Hotel... but with a daring dash of mystery (i.e. murder!  GASP!) to stir things up a bit!  Sound intriguing?  GREAT because I fancy introducing you properly now, and then getting on to that lovely little excerpt the author kindly provided.  So, ready, set, and away we go... 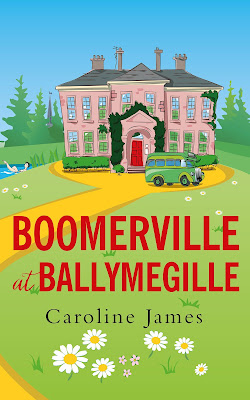 Boomerville at Ballymegille
by
Caroline Jones
About the book...
Boomerville is back!
Join Hattie and Jo as they head to Southern Ireland to open Boomerville Manor, a holiday retreat for guests of ‘a certain age’. There’s Irish craic and shenanigans aplenty for the colourful cast of characters as everyone gathers for the grand opening.
Meet Melissa, an ex-cabaret singer running from her abusive husband, and Bill, a bachelor bullied from beyond the grave by the ghostly voice of his mother. Along with local bobby Harry the Helmet, ageing aquatic team the Boomerville Babes, eccentric artist Lucinda Gray, and heartthrob Finbar Murphy, they gather in Ireland and the fun begins. But murder is in the air and there’s mischief afoot. Will the residents get more than they bargained for at Boomerville?
Set in the beautiful Irish countryside, ‘Boomerville at Ballymegille’ is a heart-warming story of friendship, fears and new beginnings.
AMAZON  UK  |  US
~~~~~~~~~~~~~~~~~~~~~~~~~~~~~
~~~   EXCERPT   ~~~
Thank you so much for hosting me on your brilliant blog today as my new book, Boomerville at Ballymegille is published. I hope your readers will enjoy this short extract.
Happy reading everyone, with love, Caroline xx 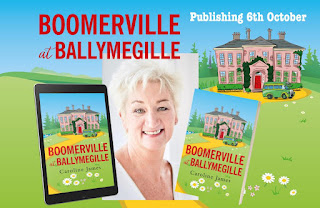 A new guest has arrived at Hotel Boomerville. On impulse, Melissa has made the difficult decision to run away from her abusive husband, to hideaway at Boomerville, but as she arrives and reflects, anxiety sets in…
Melissa was nervous. The excitement that she’d felt as she’d left Pendelton House had begun to wear off. The housekeeper had the day off and it had been easy to pack and put her cases in her car and the security guard had waved as she’d driven out of the gates. But after speeding along the motorway to Cumbria and arriving at Hotel Boomerville, the thrill of being welcomed by the friendly owner and shown to a delightful bedroom, overlooking the garden at the front of the hotel, had faded.
Now, she sat at a dining table in the Rose Room restaurant and thought about Malcolm. She wondered if he’d arrived back from his trip.
Melissa hadn’t left a note and in her haste to depart had packed as many suitcases as she could fit in her car then, without a backward glance, she’d fled from Pendleton House. She knew that Malcolm would be furious and the rage to follow would know no bounds. His wife wasn’t at his beck and call from the moment his Bentley convertible drove through the electronic gates of their home and he would realise that the welcoming lights she’d left on were simply illuminating an empty household.
Malcolm would look for her and she wondered where he would begin. She had no friends. Any that she’d had before their marriage had slid into the shadows soon after.
She’d removed her email account and texts from her mobile phone and any information that she thought might trace her steps, then placed the phone in her bedside drawer, where Malcolm would find it. God willing, she’d bought some time and, with luck, safely tucked away at Boomerville, she would be able to think clearly and work out what to do next.
But now, as she sat in the candle-lit room and glanced around at her fellow diners, Melissa’s heart began to thump and she felt her hands shake. Malcolm would be raging and his presence seemed to penetrate the walls, suffocating the life in the room. She felt light-headed and, reaching for her drink, took a deep slug to calm her nerves.
As the wine hit her empty stomach, she began to close her eyes but flinched when a hand touched her arm. Hattie, the manager, stood by Melissa’s side.
‘Are you alright? You look a little shaky.’
‘I’m f-f-fine,’ Melissa stuttered. ‘Just tired from my journey and I’ve not eaten all day.’
‘Soon have that sorted.’ Hattie held a plate of canapés. ‘Try one of these while I go and grab someone interesting to sit next to you.’
Melissa watched Hattie move away, the confident figure of a woman in her prime. Well-groomed and beautifully dressed with a flattering hair style, Hattie exuded confidence. Melissa felt envious and wished that she could change places.
She glanced at the canapés and popped one into her mouth.
The warm pastry crumbled and tangy cheese, with a slither of smoked ham, melted onto her tongue. Melissa couldn’t remember the last time that she’d eaten, such was her anxiety, and now the combination of wine and pastry felt like lead in her mouth. Reaching for a napkin, it was all she could do not to gag.
* * *
Read more in…
Boomerville at Ballmegille
~~~~~~~~~~~~~~~~~~~~~~~~~~~~
About the author... 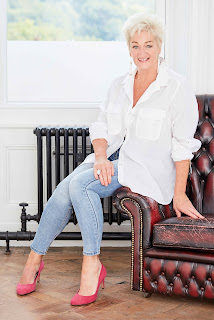 Best-selling author of women’s fiction, Caroline James has owned and run businesses encompassing all aspects of the hospitality industry, a subject that often features in her novels. She is based in the UK but has a great fondness for travel and escapes whenever she can.
A public speaker, which includes talks and lectures on cruise ships world-wide, Caroline is also a consultant and food writer. She is a member of the Romantic Novelist’s Association, the Society of Women’s Writer’s & Journalists and the Society of Authors and writes articles and short stories, contributing to many publications. Caroline also runs writing workshops.
In her spare time, Caroline can be found walking up a mountain with her two Westie dogs, sipping raspberry gin or relaxing with her head in a book and hand in a box of chocolates.
Books by Caroline James:
Hattie Goes to Hollywood
The Best Boomerville Hotel
Coffee Tea the Gypsy & Me
Coffee Tea the Chef & Me
Coffee Tea the Caribbean & Me
Jungle Rock
SITE   |   TWITTER   |   FACEBOOK
AMAZON AUTHOR PAGE
~~~~~~~~~~~~~~~~~~~~~~~~~~~~~ 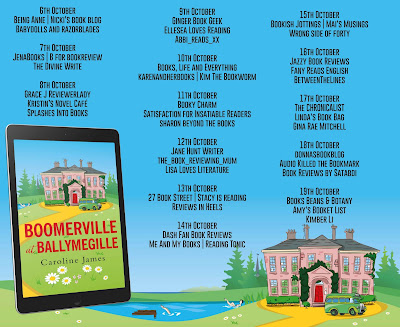 Gina - thank you so much for hosting me and my new novel, Boomerville at Ballymegille on your lovely blog. I hope that you and your followers enjoy the short extract. Warmest wishes to you all and happy reading, Caroline xx