Today, we're joining Rachel's Random Resources for a stop along their current tour featuring the work of author Martha Engber. We've got an exclusive excerpt ready to temp and tantalize, then your chance to win with THREE different giveaways! So, what are you waiting for? Get to reading my bookish friends! Today's title in the spotlight is... 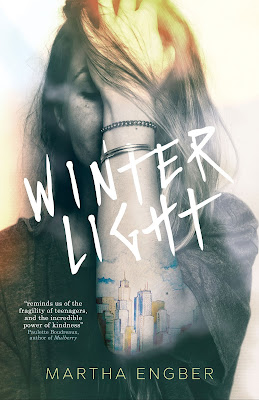 Winter Light
by
Martha Engber
About the book...
Fifteen-year-old Mary Donahue of suburban Chicago is a kid on the cusp of failure during the brutal blizzard winter of 1978-79, the end of a hard luck, hard rock era sunk in the cynical aftermath of the Vietnam War.
Though a smart, beautiful kid, she’s a motherless girl raised by an uneducated, alcoholic father within an extended family of alcoholics and addicts. Aware that she’s sinking, she’s desperate to save herself and so reaches out to an unlikely source, Kathleen, a nice, normal kid from English class.
But when the real storm hits, the full force of a harsh adult world almost buries Mary. Only then does she learn that the only difference between life and death is knowing when to grasp an extended hand.
AMAZON  US  |  UK
~~~~~~~~~~~~~~~~~~~~~~~~~~
~~~  EXCERPT  ~~~
My Example
Intro to Excerpt

The book opens when events in Mary’s life force her to do what many of us don’t, reach across socioeconomic lines for help, in this case by forming a friendship with middle-class Kathleen. Though the two girls are physically near one another at school and live in the same town, they move within social groups and belong to families so different from one another, they don’t know one another’s language. They immediately get off on the wrong foot when Mary and her friends, who are hanging out at a deserted forest preserve on a cold winter day, make fun of Kathleen and her brother when they arrive to toboggan.

In this scene, a significant setback has pushed Mary to try and regain Kathleen’s trust in the hopes she’ll teach Mary how to do better in life. She’s managed to wrangle Kathleen into a toboganning outing, which Kathleen never would have agreed to had not her mom, Mrs. McCarthy, encouraged her to do a good deed. For the first time, Mary has to drop her shield of cool — her primary source of protection — in order to try a scary activity that may well make her look ridiculous.

Mrs. McCarthy and a grumpy Kathleen pick up Mary in front of her house and drive to the forest preserve.

Martha Engber’s next novel, WINTER LIGHT, will be published Oct. 6, 2020, by Vine Leaves Press. She’s also the author of THE WIND THIEF, a novel, and GROWING GREAT CHARACTERS FROM THE GROUND UP. A journalist by profession, she’s written hundreds of articles for the Chicago Tribune and other publications. She’s had a play produced in Hollywood and fiction and poetry published in the Aurorean, Watchword, the Berkeley Fiction Review and other journals. She’s also a freelance editor, workshop facilitator and speaker. She currently lives in Northern California with her husband, bike and surfboard.
SITE  |  FACEBOOK PAGE  |  FACEBOOK
TWITTER  |  INSTAGRAM  |  LINKEDIN
GOODREADS  |  PINTEREST
~~~~~~~~~~~~~~~~~~~~~~~~~~~ 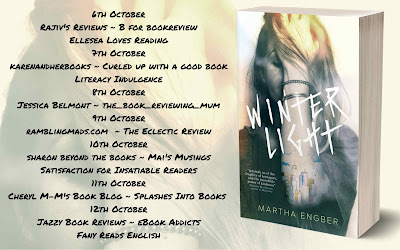 Thank you so much for including my excerpt on your blog! I look forward to learning about the winners of the giveaway!