Today, we play host to a stop along the Rachel's Random Resources tour featuring the fourth release in the Lily Baker wartime series from author Patricia McBride.  It's a work of Historical Fiction that's sure to keep you turning pages well into the night.  KEEP READING for more about today's title, and then continue on for a SPECIAL GUEST POST from the author herself as she discusses the inspiration behind her stories. 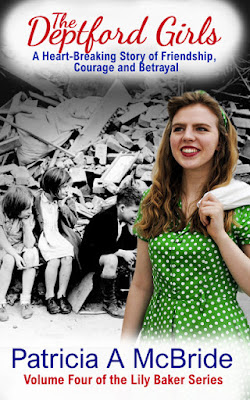 The Deptford Girls
Lily Baker series, Book 4
by
Patricia McBride
About the book...
A country at war. Friends in trouble.
A fascist traitor. Stepping up can only lead Lily to danger.
Rescuing friends or spotting spies; Private Lily Baker always gets involved.
While London burns she looks out for workmates and girlfriends but also uncovers a web of deception at the Depot where she works.
When the ruthless suspect knows she’s closing in, she must act fast to unmask the traitor and save her friends, herself, and the brave soldiers overseas whose lives are at risk.
The Deptford Girls is the fourth in the Lily Baker wartime series. This heart-wrenching story features courage, friendship, betrayal, compelling characters, and a captivating plot.
If you like vivid stories that take you right into the world of the characters, you’ll love The Deptford Girls. Cuddle up with a cuppa and enjoy this exciting, warm-hearted read.
AMAZON  US  |  UK
~~~~~~~~~~~~~~~~~~~~~~~~~~ 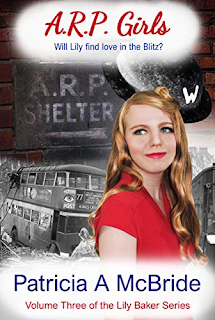 People often ask me where I get inspiration for my stories. The answer is, it’s usually something I’ve read or been told. That gets me wondering ‘What if…’ What if it happened a different way, to different people, in a different time or place. The first Lily Baker book, The Picture House Girls, was inspired by the true story of the Cutteslowe Walls in Oxford.

In 1934 a property develop was building a new estate. One end of the estate consisted of ‘corporation’ houses, the other end bigger private ones.

Afraid he’d be unable to sell the bigger ones if the corporation people had to walk past them, the developer built an 8’ wall with barbed wire top straight across the two longest roads, between the houses.

Imagine your own road if someone did that.

Naturally, the corporation people were outraged, especially as they had to walk a lot further to get to shops and bus stops. There was a decades long campaign to get the walls demolished.

The council had the walls knocked down at one point only to discover the road itself belonged to the developer, so they had to rebuild them. Then someone drove their car into one of them. Again, it was rebuilt. At the beginning of World War Two a tank drove through one of them. It was rebuilt. In fact, the walls weren’t finally demolished until 1955. There is a blue plaque to commemorate the Cutteslowe Walls - naturally it is between the corporation and posh houses.

When I heard about these walls, I immediately thought it would make a great story. At the heart of it is the struggle to get the wall demolished (in my story it’s only one wall) Lily Baker, a timid working-class girl gets involved in the fight and is encouraged by the eccentric leader to stretch herself and take on roles she’d never dreamed of before. Throughout the book she builds her confidence.

Lily works in a factory making men’s shirts during the day, but does some part-time work in The Picture House as an usherette. One night she is leaving with the day’s takings when someone tries to snatch her bag. The thief is tackled by Edward, an officer from the posh end of her street. It’s a real Cinderella tale - poor girl meets rich boy. A romance begins.

The romance is pure fiction of course, and so are many of the ‘facts’ in the novel. Having said that, the newspaper reports from the time give great insight into what happened. There really was an eccentric communist campaign leader. The publicity attempts described in the book were based on his campaigns. The council really did knock down the wall and have to rebuild it. A tank really did go through the wall. But I changed the time-scales so that the wall is demolished after a few months rather than decades.

I had to invent Lily’s home life so decided she would have an unpleasant father and a hard-working mother who was a cleaner for ladies on the posh end of the road. Her romance is stop-start from the beginning because Edward is away with the army, but it does progress slowly.

I’m not going to say more about the romance because I don’t want to spoil your fun when you read the book! You’ll find it on Amazon. 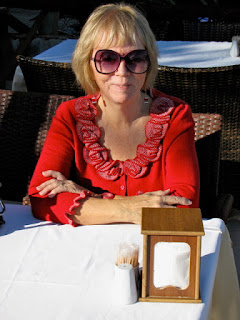 Patricia [McBride] lives in Cambridge, England with her husband Rick. She first wrote non-fiction, mainly self-help books, but became inspired to try her hand at fiction. In addition to writing she volunteers for a local museum and Addenbrookes Hospital.
FACEBOOK
~~~~~~~~~~~~~~~~~~~~~~~~~~