Today, we're teaming up with Rachel's Random Resources to shine a spotlight on a title that is ready and waiting for your reading pleasure.  So, if you'd care to join me, our blog tour guest is about to take centerstage... 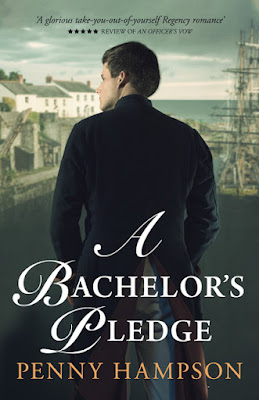 A Bachelor's Pledge
by
Penny Hampson
About the book...
The woman who haunts his dreams
Secret agent Phil Cullen is upset when he discovers that the young woman he rescued from Mrs Newbody’s establishment has absconded from his housekeeper’s care without a word. Thinking he has been deceived, he resolves to forget about her… something easier said than done.
The man she wants to forget
Sophia Turner is horrified when she is duped into entering a notorious house of ill-repute. Then a handsome stranger comes to her aid. Desperate that no one learns of this scandalous episode, Sophia flees to the one friend she knows she can trust. With luck, she will never see her mysterious rescuer again.
But fate has other plans…
Months later, Phil is on the trail of an elusive French agent and Sophia is a respectable lady’s companion when fate again intervenes, taking their lives on a collision course.
Traitors, spies, and shameful family secrets - will these bring Sophia and Phil together… or drive them apart?
--->  SNAG YOUR COPY TODAY   <---
~~~~~~~~~~~~~~~~~~~~~~~~~~~~~~~~~~~
About the author... 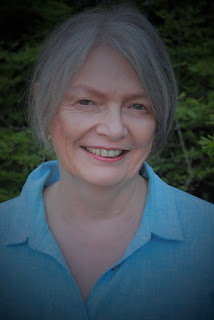 Some time ago Penny Hampson decided to follow her passion for history by studying with the Open University. She graduated with honours and went on to complete a post-graduate degree.
Penny then landed her dream role, working in an environment where she was surrounded by rare books and historical manuscripts. Flash forward nineteen years, and the opportunity came along to indulge her other main passion – writing. Penny joined the New Writers’ Scheme of the Romantic Novelists’ Association and  three years later published her debut novel, A Gentleman’s Promise, a historical mystery/romance and the first in The Gentlemen Series. An Officer’s Vow soon followed and the latest in the series is A Bachelor’s Pledge.
But never happy in a rut, Penny also writes contemporary suspense with paranormal and romantic elements. Her first book in this genre is The Unquiet Spirit, published by Darkstroke.
Penny lives with her family in Oxfordshire, and when she is not writing, she enjoys reading, walking, swimming, and the odd gin and tonic (not all at the same time).
BLOG  |  TWITTER  |  FACEBOOK
~~~~~~~~~~~~~~~~~~~~~~~~~~~~~~~~~~~

Thanks for featuring me on your blog, Gina! Best wishes, Penny x