Today, we’re joining Rachel’s Random Resources for a stop along their current tour featuring the work of author Penny Hampson. We’re setting our sights on the first in her Regency Romance series and let me tell you...it’s SO GOOD! Ready or not, it’s time to dive between the pages of today’s blog tour guest and ebook of choice… 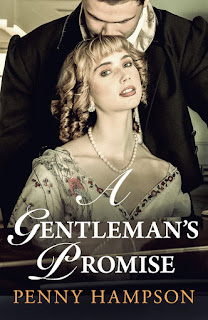 A Gentleman’s Promise
by
Penny Hampson
About the book...
A docile wife is what he wants. A husband is the last thing she needs. Can a quest for a killer teach them that they are both wrong?
Emma Smythe and her brother arrive at Easterby Hall to discover that a handsome stranger has laid claim to their ancestral home and the family title. Have her relatives been murdered, and is her brother next? Determined to find the answers, she has no option but to trust the gentleman who insists that he will help. But danger appears in many guises, and for a woman intent on remaining single, her intriguing protector may prove the biggest threat of all.
The attempts on Richard Lacey’s life begin when he inherits a title and a rundown estate. A coincidence? He’s not so sure. Problems multiply with the unexpected arrival of Jamie and Emma Smythe. Long thought dead, they too are potential targets. Richard thinks he wants a docile, obedient wife, but will the task of keeping headstrong Emma safe from danger change his mind?
Embroiled in a sinister mystery, can Richard and Emma work together to catch a killer? And will this dangerous quest teach them that what they both wish to avoid is exactly what they need?
Filled with intrigue, unexpected twists, and faultless period detail, this slow-burn romance is a must-read for lovers of classic Regency fiction.
--→ GRAB YOUR COPY TODAY ←--
~~~~~~~~~~~~~~~~~~~~~~~~~~~~~~~~~~~
A family name looking for an heir after two terrible tragedies. A distant relation found to claim the title. But what happens when upon his arrival to his new domain, two lost souls arrive on his doorstep...and turn out to be far more than they appear? The thought lost heir has been found, and the Viscount is only too happy to relinquish the title...but a rouse must be played or the newfound family members may not survive to stake their claim! *cue the sinister music* Oh and if THAT wasn’t enough to intrigue you, let’s throw in the fact that of the two new arrivals, the eldest lad is not actually a lad, but a lady passing as such for safety, and her outspoken mind, and beguiling ways are about to cause a bit of chaos of their own to a certain formerly titled man’s heart. Yes, my friends, there is MUCH to see here, and only so much that I shall spoil...nay TAUNT with, but what’s the harm of a little more...right?
Right from the start, I LOVED our lead characters! Richard was a head above in his way of thinking, thanks to his fabulous sister, especially in how he dealt with women. He actually LISTENED to them, worked WITH them, and could easily be persuaded (especially my a certain recent arrival) to to all sorts of things that the ton may look down on, but in reality, they had no baring on them whatsoever! His acceptance of people, of love in its many forms, and of life’s oddities was refreshing to say the least...and let’s not forget he was certainly easy on the eyes! As for our lady Emma, she too was much different than the ton might expect, but having had to survive what she and her brother did, make their way mostly on their own to new parts, find their family, establish who they were and accept whatever may come their way with little to no support….come now, lesser women would have swooned and be done with it all! No, Emma was not the swooning type, and though she had a hard time trusting her heart, she knew her mind and the way she tackled everything thrown at her from start to finish was top notch.
In the end, all’s well that ends well...and it ENDED VERY WELL! They’ll be a few surprises along the way, and I most certainly thought things may take a deadlier tone at one point or another, but I was pleased nonetheless by the direction the author decided upon. As I hear it, there are other works by this author already out in the reading wild...and I just might have to do a bit of searching of my own for my next adventure!
~~~~~~~~~~~~~~~~~~~~~~~~~~~~~~~~~~~
About the author…

Penny Hampson writes mysteries, and because she has a passion for history, you’ll find her stories also reflect that. A Gentleman’s Promise, a traditional Regency romance, was Penny’s debut novel, which was shortly followed by more in the same genre. Penny also enjoys writing contemporary mysteries with a hint of the paranormal, because where do ghosts come from but the past?
Penny lives with her family in Oxfordshire, and when she is not writing, she enjoys reading, walking, swimming, and the odd gin and tonic (not all at the same time).
BLOG | TWITTER | FACEBOOK
~~~~~~~~~~~~~~~~~~~~~~~~~~~~~~~~~~~

Special thanks to Rachel of Rachel’s Random Resources for the chance to bring this tour to you as well as the ebook for review. (THANKS!) For more information on this title, the author, this tour, or those on the horizon, feel free to click through the links provided above. This title is available now, so click on over to your favorite online retailer to snag your copy today.
Until next time, remember...if it looks good, READ IT!
Posted by Gina at 12:30 AM

Hi Gina, Thanks for reading my book and giving it this great review. I'm delighted that you enjoyed it!

I did indeed! Thanks for stopping by!