Well then, there's no WINE like the present to UNCORK a new Romantic Comedy currently FERMENTING on tour with Rachel's Random Resources!  (You'll have to pardon the puns because while the myriad of shirts for sale make it look easy, it's pretty darn hard for this reader to write a witty wealth of WINERY dialog!)  It's the latest TASTE of author Rich Amoori's writing talent, and personally, I think he's struck VINEYARD gold once again!  It's really hard not to fall head over GRAPEVINE for this potential couple to be...and seriously, those grandmothers!  HA!  Anyway, getting back to basics and the proper introduction.  Please sample the topnotes of today's ebook of choice and blog tour guest... 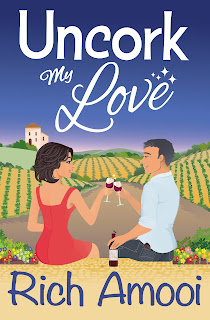 Uncork My Love
by
Rich Amooi
About the book...
A sweet romantic comedy set in beautiful Napa Valley!
Ivy needs a miracle and a drink—not necessarily in that order. With a struggling winery, the only hope of keeping her dream alive is snagging a gold medal at the annual wine competition. She’s determined to win, but she can do it without the help of Ted Jacobs, aka Mr. Know-it-All.
Ted wants to catch lightning in a bottle and create the world’s greatest wine, but he’s smart enough to know he can’t do it alone. When he heads to Napa to keep his grandma from ending up in jail (don’t ask), he meets Ivy. She’s as complex and intoxicating as his award-winning cabernet, but as stubborn as the mule next door when she stomps on his offer to collaborate.
Ted knows it’s risky to mix business with pleasure, but if Ivy would only listen, they might just be the toast of the town.
AMAZON  US  |  UK
🍷     🍇     🍷     🍇     🍷

Ted and Ivy start off as different as different can be...but in the end, could they make the perfect blend?  If it's up to two meddling grandmothers, you bet your sweet rosé, but just like fine wine, these things take time...and that's something that might just not be on the menu.
Family.  What can you do?  You love them...sometimes to pieces...but they are still yours and while you call them your own, it doesn't mean that can't infuriate the living snot out of you and drive you to MERLOT!  Okay, a bit dramatic, but the sentiment is right...am I right?  Anyway, Ted's Grandma Loretta is a HOOT!  The lengths she is willing to go to get what she wants...whether it be a perfect match or a piece of their family history (dun dun dunnn!)...are without end.  The same can be said for Ivy's grandmothers as well...two peas in a pod!  I suppose that's part of their charm, really...and I say, WAY TO GO GRANDMAS...that is unless I was on the other end of those antics.  In that case, I'd probably be as boggled as Ivy was...at least until I had a chance to breathe and realize that their hearts were in the right place.  I mean was it really their fault she and Ted got stuck together with all that wine, food, and reading material?  No...just ignore the giggling sounds you hear from outside the closed door.  Was it really something cooked up to simply get them both to see past their broken hearts on the off chance that bad news was just around the corner?  Perhaps...but could you blame them?  Really, these two stole the show, but that's not to say that Ivy and Ted took it laying down... 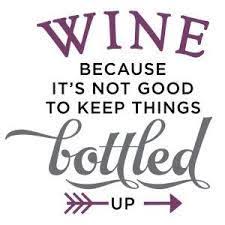 Individually, they were masters of their domain.  Together, they could be a force to be reckoned with.  Grant it, in order to achieve that ultimate force power, certain concessions would have to be made.  Little things like, unsolicited advice being withheld instead of forcefully given, accidentally matching polos becoming a thing of the past, bushes not being trimmed without permission, and new concoctions not being judged against old standards (in wine AND love).  No big deal, right?  Umm...well, it certainly led to some interesting situations, but anything that gets the two leads to finally buckle down on what they feel and who it's towards is a win, right?  Right...and in this case, it's FUN, WITTY, and WONDERFUL, so you won't want to miss a single sip!  Okay, I'll stop with the wine jokes...
Suffice it to say that this was a five star read and if you're a fan of Romantic Comedy, I highly suggest ordering in tonight because once you snag your copy of this book, you won't want to put it down!
🍷     🍇     🍷     🍇     🍷
About the author...

Rich Amooi is a Taleflick Discovery Winner, Readers' Favorite Gold Medal Recipient, Holt Medallion Finalist, and the Amazon Bestselling author of 16 romantic comedies, including It's Not PMS, It's You, Dying to Meet You, There's Something About a Cowboy, and Madam Love, Actually.
A former radio personality and wedding DJ, Rich now writes romantic comedies full-time in San Diego, California, and is happily married to a kiss monster imported from Spain. Rich believes in public displays of affection, silliness, infinite possibilities, donuts, gratitude, laughter, and happily ever after.
SITE | FACEBOOK | INSTAGRAM | TWITTER  |  GOODREADS
🍷     🍇     🍷     🍇     🍷
~~~   CHANCE TO WIN  ~~~
$25 Amazon Gift Card
(OPEN INTL)
*Terms and Conditions –Worldwide entries welcome.  Please enter using the Rafflecopter box below.  The winner will be selected at random via Rafflecopter from all valid entries and will be notified by Twitter and/or email. If no response is received within 7 days then Rachel’s Random Resources reserves the right to select an alternative winner. Open to all entrants aged 18 or over.  Any personal data given as part of the competition entry is used for this purpose only and will not be shared with third parties, with the exception of the winners’ information. This will passed to the giveaway organiser and used only for fulfilment of the prize, after which time Rachel’s Random Resources will delete the data.  I am not responsible for despatch or delivery of the prize.
a Rafflecopter giveaway
🍷     🍇     🍷     🍇     🍷 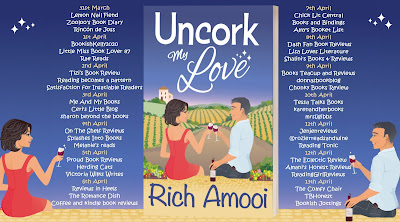