RRR presents... TO THE FAIR LAND by Lucienne Boyce - EXCERPT!

Today, we’re shining the BOOK SPOTLIGHT on a title currently on tour with Rachel’s Random Resources. From the sound of things, it’s got mysteries to be solved, and danger aplenty, but let’s not simply speculate about the contents...let’s dive right in! Ladies and gents, prepare yourselves for today’s title in the spotlight... 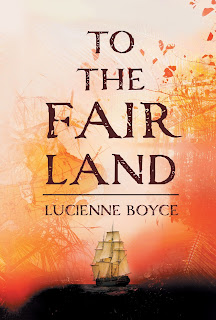 To The Fair Land
by
Lucienne Boyce
About the book...
In 1789 struggling writer Ben Dearlove rescues a woman from a furious Covent Garden mob. The woman is ill and in her delirium cries out the name “Miranda”. Weeks later an anonymous novel about the voyage of the Miranda to the fabled Great Southern Continent causes a sensation. Ben decides to find the author everyone is talking about. He is sure the woman can help him – but she has disappeared.
It is soon clear that Ben is involved in something more dangerous than the search for a reclusive writer. Who is the woman and what is she running from? Who is following Ben? And what is the Admiralty trying to hide? Before he can discover the shocking truth, Ben has to get out of prison, catch a thief, and bring a murderer to justice.
AMAZON US | UK
SILVERWOOD BOOKS | BOOK DEPOSITORY | FOYLES
B&N | APPLE BOOKS | KOBO
~~~~~~~~~~~~~~~~~~~~~~~~~~~~~~~~~~~~~~
~~~ EXCERPT ~~~

To The Fair Land is a mystery thriller set in the eighteenth century. In 1789 an anonymous book about a fictitious voyage to the South Seas is a publishing sensation. Struggling writer Ben Dearlove decides to find the author everyone is talking about. Before long it is clear that he has stumbled onto something much more significant than the search for a reclusive writer. Ben finds himself up against people who will lie, steal and even kill to stop him discovering the truth behind the book.

Ben’s search takes him from the coffee houses, theatres and book shops of London to the docks and taverns of Bristol. Along the way he becomes aware that two men – a Mr Hay and a Mr Beale – are shadowing him. In this scene he is riding along a country lane when two horsemen overtake him.

The road passed between two high hedges. Ben had not gone far into its cover when he heard the rush of hooves. He glanced back. The two gentlemen were in a hurry all of a sudden. He pulled over to let them pass. The first rider wheeled across his path. Ben’s horse, an otherwise placid hireling, shied in alarm. While he struggled to calm the frightened animal, the second man drew up.

“Stand!” he yelled, glaring at him with angry red eyes.

Ben gasped in recognition. Beale smirked and plucked at his sleeve. Mr Hay clawed at him from the other side. He felt himself slipping. In a moment, he would be unseated.

Before that moment came they were overtaken by the farm workers, the men’s boots heavy with mud from the furrows. There were three women, their identical moon-faces reflecting womanhood in all its stages – grandmother, mother, daughter. Their skirts were hemmed with the muck of the byre, their sleeves rolled up over arms brawny from dairy work. An empty lunch basket swung from the girl’s arm, but the cider jar was still doing the rounds.

They halted, their faces showing a mix of curiosity and suspicion. Hay thrust a hand into his coat pocket, drew out a piece of paper and brandished it at them. “Here’s a warrant! It’s official business.”

They goggled at the document, inclined to be awed by it, yet eager – the girl in particular – to see a villain apprehended. A gentleman of the road perhaps. That she thought Ben dashing enough to be a highwayman was clear from her awestruck gaze.

One or two of the men obediently started to move off, but inspiration had come to Ben. “I won’t go back to be flogged and hung from the yardarm!” he yelled. “I won’t go back to serve under mad Cap’n Jack! The midshipman he threw to the sharks off Port Royal had a quicker death than I’d get!”

“Why, ’e’s a runner,” the man with the cider bottle said slowly.

“Aye, and that’s the press,” growled another.

“Come to tear honest men away from their wives and sweet’arts,” shrilled the old crone, who was well past the age when the loss of a sweetheart might concern her.

“You dog!” Mr Hay made an angry swipe at Ben. It was not the best move he could have made in the circumstances.

“Help! He’s murdering me!” Ben yelled, adding for good measure, if not consistency, “I’d rather die here than go back to run the gauntlet… and be keel-hauled and… and lashed at the grating!”

Whether or not all of these punishments were likely to be inflicted simultaneously in the Royal Navy he had no idea. Neither did his audience, but they sounded dreadful enough. The country folk had identified Mr Hay and his friend as representatives of that hated institution the press gang, persecuting a man who had been driven to desertion by his sufferings. With one voice, and that an angry one, they tossed aside basket and bottle and flung themselves at the officers.

Lucienne Boyce writes historical fiction, non-fiction and biography. After gaining an MA in English Literature, specialising in eighteenth-century fiction, she published her first historical novel, To The Fair Land (SilverWood Books, 2012, reissued 2021), an eighteenth-century thriller set in Bristol and the South Seas.
Her second novel, Bloodie Bones: A Dan Foster Mystery (SilverWood Books, 2015) is the first of the Dan Foster Mysteries and follows the fortunes of a Bow Street Runner who is also an amateur pugilist. Bloodie Bones was joint winner of the Historical Novel Society Indie Award 2016, and was also a semi-finalist for the M M Bennetts Award for Historical Fiction 2016. The second Dan Foster Mystery, The Butcher’s Block, was published in 2017 and was awarded an IndieBrag Medallion in 2018. The third in the series, Death Makes No Distinction, was published in 2019 and is also an IndieBrag Medallion honoree, recipient of Chill With a Books Premium Readers’ Award, and a joint Discovering Diamonds Book of the Month. In 2017 an e-book Dan Foster novella, The Fatal Coin, was trade published by SBooks.
In 2013, Lucienne published The Bristol Suffragettes (SilverWood Books), a history of the suffragette movement in Bristol and the west country. In 2017 she published a collection of short essays, The Road to Representation: Essays on the Women’s Suffrage Campaign.
BLOG | TWITTER | FACEBOOK | GOODREADS
~~~~~~~~~~~~~~~~~~~~~~~~~~~~~~~~~~~~~~ 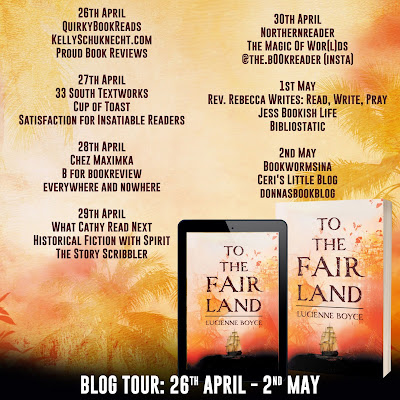 Thank you for sharing this excerpt on your blog!