Falling in love is the last thing single mom Laci Hogan is looking for. Too bad her new neighbor didn’t get the memo. Cooper Stevens isn’t a stranger to hard work and when he wants something, he won’t stop until he gets it. Fall for this hard-working hottie in Make Me by Evelyn Sola, a Widow Romance, the next book in the Blue Collar Romance Series. 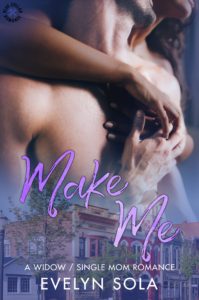 Make Me
by
Evelyn Sola
About the book...
Laci Hogan isn’t looking for love when she moves back to Oak Bend. Coming home is all about Laci gaining her independence she once lost. Besides, getting over a rocky past and losing her husband is more than enough for her to juggle while raising her two-year-old daughter but old acquaintance - Cooper Stevens can be persistent when it comes to getting what he wants. No stranger to hard work, he’s willing to do all it takes to prove to his new neighbor Laci that she doesn’t have to do life alone and that with the right person, a relationship makes life better - oh so much better. Will Cooper make her see that this could be all the happiness she never knew she was looking for?

Just as I approach the corner, I’m hit on the shoulder by another body. I’m pushed to the wall, and the mountain of books in my hands crashes to the floor. The red folder holding my English term paper lands on top of the heap.
“Watch where you’re going!” the person who bumped says.
She doesn’t have the decency to stop, but by the sound of her giggles, I know who it is. And there’s no way the school’s most popular senior would give me the time of day. I sigh and drop to the floor to pick up my things. My heart starts to beat erratically because if there’s one thing I know—wherever Candace is, he’s never too far behind.
I’m proven right. A pair of black boots enters my line of vision. Cooper Stevens. Those are his boots. He was wearing them the very first time I saw him, and I remember wanting to be swallowed up by the ground. The only thing that saved me from total embarrassment was the fact that I know someone like him would never notice someone like me.
I hold my breath while he approaches and quickly turn to my books. Please leave. Please leave. Please leave. I busy myself arranging my books. I won’t stand up until he walks past me. Only he doesn’t. He drops down to my level and grabs my red folder. Instead of handing it to me, he opens it and starts to look through the pages.
I finally find the courage to look at him, and our eyes lock. For the first time ever, I notice the hazel flecks around his brown eyes. I look away and drop my head, and because this is the day from hell, my glasses slide off my face and land on the floor.
We reach for them at the same time, and his large hand ends up covering mine. I let out a small sound, and I say a silent prayer that he didn’t hear it. I note the contrast of our skin tones, his white hand covering my brown one before I pull mine away. He lifts my glasses and brings them to my face. I’m as still as a statue while I look down at the linoleum floor. He moves closer and slides the glasses back onto my face. I take a deep breath and bask in the smell of his leather jacket mixed with his fruity shampoo.
When he gets the glasses on my face, he moves his hands behind my ears to make sure they are secure.
“You okay?” he asks. He lifts my chin and forces me to look at him.
Like a deer in headlights, all I can do is stare.
“Be careful next time, Laces,” he whispers.
I lick my dry lips. “Um, my name is—” The words get locked in my throat. I grab my books and finally stand up. He stands right along with me. When we’re both upright, he takes a step closer.
“Your name is what?” he asks. He hands me my folder, and when I take it from him, his fingers touch mine.
“Um, my name is—” I clear my throat and try again. The entire time he stares at me with an expression I can’t interpret. “My name isn’t, um—” I never get a chance to finish my sentence.
“Cooper!” Candace yells in the hallway. She runs over to us and grabs the sleeve of his leather jacket. “Come on! What are you still doing here with her?” She points at me without bothering to look in my direction. “Let’s go. You did your good deed of the day. Maybe you should tell her to run a flat iron through that hair.” The entire time he was being dragged away, his head was turned in my direction, until they turned the corner and he disappeared. 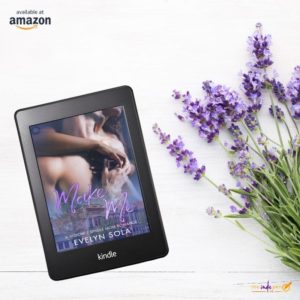 Here we have the good, the bad, and the ugly.

In the good category, most definitely Laci, her little girl, and her aunt, as well as Cooper and his rescue dog.  Laci was trying so hard to provide the type of life her daughter deserved.  Despite how she came into this world and to whom, she wanted her to have all the love, all the opportunities, all the freedoms and support that she could offer...all the things she never received herself, growing up.  I couldn't help but root for her, all the way through the story, and the ending, both the explosive scene and the epilogue, were spot on for the tale.  Moving forward, Laci's aunt was an absolute gem.  Despite have a horrendous mother, more on that in another category, she had an ally, a friend, and a stand in mother in her.  She wouldn't take crap from anyone, and she gave love like it had no boundaries.  Same can be said for Sam's rescue dog...and even Sam, himself.  The pupper is a sweetheart, and I love that the breed chosen is one that some can be frightened of, but the gentle side if shown here.  As for Sam, he's a sight for sore eyes, and a potential salve for a wounded heart, but if he wants to win the prize, he's gonna have to move slow, and let Laces lead the way.

In the bad category, Laci's deceased husband, and all those people that looked over her in high school...but mostly Brian.  Yeah, it's best to let the dead rest, but I can't help but hope this guy would have eternity restless.  The harm he caused emotionally and spiritually to Laci was obnoxious.  The things he said it her, blamed her for, and how he treated her...well, it may not have been physical abuse, but it was the next worst thing.  Stuff like that can really get under your skin, and for Laci, it does...it takes her unexpectedly getting out from under him, and some really strong, and patient people to help her heart heal, and give herself permission to love again.

In the ugly category, we've got Laci's enemy since school days...Laci...and her very own mother, if you can believe it.  The former was a pretty girl on the outside that turned into a head turning woman, but what was on the inside was dark as tar, and three times as nasty.  She was overly concerned with her looks, and her weight, so much so that she couldn't accept others as they were simply because she couldn't accept herself.  Her lashing out when she wasn't getting her way was childlike and pretty easy to spot.  Her inability to walk away when she's been practically pushed, just made her immaturity shine brighter.  As for the latter, Laci's mom, you won't be able to believe the nerve of this woman.  She basically used her daughter for whatever was convenient at the time, just so she could hook her next man.  She didn't have enough self esteem to be on her own, and gave her self worth away to whatever Tom, George, or Harry happened into her life.  THEN, when things are starting to look up, she has a nasty habit of turning up...and you can imagine the fireworks that would ensue.

All in all, memorable for many reasons with a story that will echo the "mean girl" tales many have from their own lives...but if you take a page from Laci, you'll know that the best way to win, the best way to come out on top of the naysayers, is to keep doing you, and don't let anyone steal your light.  Note for readers, there is a fair mention of Laci's weight being a bit over that of your standard twigs, and a good amount of spicy talk and/or scenes.  Sometimes those can be tipping points of interest, but if not, at the very least, it's good to know going in.

A Boston native, wife, mother, and wine enthusiast. If she’s not writing, thinking about writing, you will find Evelyn with a book in her hands. While a new publisher, she’s been writing for years, and she will continue to write for many years to come. Evelyn is obsessed with assertive and confident men who will stop at nothing to get their woman. Her stories are filled with love, passion and humor. She currently lives in Chicago, IL with her husband and two daughters.
Facebook | Twitter | Instagram | Reader Group
Goodreads | BookBub | Newsletter | Amazon

About The Blue Collar Romance Series

Escape to Oak Bend where blue-collar hotties work hard and love even harder. From broody carpenters to sexy electricians, these eight standalones are packed with small town feels, heat, and heartwarming happily ever afters. Enjoy your favorite tropes written by an amazing group of authors: Jaymee Jacobs, Alexa Rivers, Evelyn Sola, Kate Carley, Tracy Broemmer, Mila Nicks, Claire Wilder, and Moni Boyce. Fall head over heels for swoon-worthy book boyfriends who aren’t afraid of a little hard work for that happily ever after.

This promotional event is brought to you by Indie Pen PR