Today, we're joining Rachel's Random Resources to shine the BOOK SPOTLIGHT on a title that aims to prove just what IS worth fighting for...a good name, a person's standing, friendship, and love. Sound like your type of read? EXCELLENT! Then let's get this party started because not only are we going to skim the surface, but we're taking you between the pages with a special EXCERPT! Ready...set...READ... 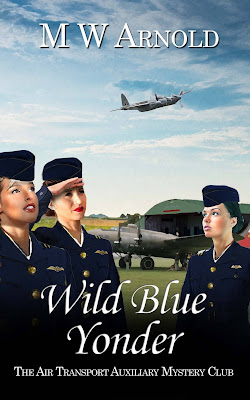 Wild Blue Yonder
by
M.W. Arnold
About the book...
Air Transport Auxiliary pilot Doris Winter is accused of stealing a valuable item from a famous Hollywood movie star, now a captain in the US Army Air Corps, after a dance at the air base in England where he's stationed. Gathering her close friends together, she's determined to clear her name.
Ruth's POW son suffers a life-changing injury just as her own cottage takes damage in an air raid and Penny's estranged little sister unexpectedly turns up, having run away from school. Together with the ongoing thefts of items of clothing and surprise personal revelations, these all threaten to hamper their investigation.
In spite of the worsening war situation, they must band together to rise above their troubles and prove love and friendship is worth fighting for.
GRAB YOUR COPY TODAY
IBOOKS | NOOK
~~~~~~~~~~~~~~~~~~~~~~~~~~~~~~~~~~~~~~
~~~ EXCERPT ~~~
Air Transport Auxiliary pilot, Third Officer Penny Alsop’s husband, a Squadron Leader on a Mosquito wing, has been wounded in combat and this will be the first time she has seen him since this occurred.
The walk up to the hospital didn’t help with Penny’s mood. Jane had persuaded her to take a quick trip home so she could change into her non-flying uniform. Penny had protested, but Jane stated it would look better when they got to the hospital, rather than the flying suit she’d been wearing. It had taken the combined persuasive powers of Jane, Mary, and Thelma, with a visiting Bobby woofing his support, to get her to agree. Now she was here, with each step she took she felt like a lead weight had been added to each of her feet. She wanted to see her husband so
desperately, yet she also dreaded what she would find. If you walked around a town or city of any size these days, you would likely come across at least one injured serviceman. For them to be missing an arm or leg, sometimes both, wasn’t uncommon. Yet the burn victims were the ones she had the most trouble with, and she doubted she was alone. The biggest fear of any
fighter pilot was being caught in the cockpit when their plane was afire. The same went for bomber pilots and crew, like her Tom. What if he’d been burned?
Picking up on her friend’s hesitation, Jane took back the hand Penny had brought back to life and
squeezed. “It’ll be all right,” she tried to assure her.
Penny automatically nodded, not trusting her voice to speak.
Standing before the entrance to the hospital, Penny’s feet refused to go any farther. The low-lying brick-built building did not help. It seemed to be taunting rather than welcoming her into its bosom. They’d also chosen a very busy place to stand, with doctors, nurses, and military personnel of various branches and countries moving back and forth, patients included. As she turned her face toward the door, her gaze locked with a man in RAF uniform, and she froze
in the midst of saying hello. He had a white bandage over half his face, while the other half glistened in a way that indicated he’d been burnt. Unable to complete the sentence, she jerked her head away in shame.
Jane couldn’t help but notice both Penny’s reaction and that of the man in question, who also turned his head away. Though she understood why her friend had reacted as she had, something snapped inside Jane's head. Consciously, she nodded her head at the pilot, the wings on his jacket marking him as such. “Look after yourself,” she wished him, bringing a half smile to his face as he gave her a salute on his way past.
Penny was rooted to the spot, so Jane took her firmly by the arm and half force-marched her until they were out of direct sight of the hospital entrance. Dropping her bag to the floor, Jane took her friend’s face between both of her hands and made her look her in the eye.
“I say this as a friend,” she began, hoping Penny would realize what she was about to say to her was for her own good and in no way personal. “Snap out of it! Yes, we don’t know what state Tom is in, but it doesn’t matter. He is still your husband, and right now he needs you more than at any time. Now, you will not hesitate, you will not feel sorry for yourself anymore. You will
march through into the hospital, and you will go and see your husband. Do you understand me?”
~~~~~~~~~~~~~~~~~~~~~~~~~~~~~~~~~~~~~~
About the author...

Mick is a hopeless romantic who was born in England and spent fifteen years roaming around the world in the pay of HM Queen Elizabeth II in the Royal Air Force before putting down roots and realizing how much he missed the travel. He’s replaced it somewhat with his writing, including reviewing books and supporting fellow saga and romance authors in promoting their novels.
He’s the proud keeper of two cats bent on world domination, is mad on the music of the Beach Boys, and enjoys the theatre and humoring his Manchester United-supporting wife. Finally, and most importantly, Mick is a full member of the Romantic Novelists Association. Wild Blue Yonder is the second novel in his Broken Wings series and he is very proud to be a part of the Vintage Rose Garden at The Wild Rose Press.
FACEBOOK | TWITTER | INSTAGRAM
~~~~~~~~~~~~~~~~~~~~~~~~~~~~~~~~~~~~~~