Today, we’re shining the book spotlight on a tour currently circling the blogosphere with Rachel’s Random Resources. It’s a multi-point-of-view story that, from the sound of things, will really tug at your heart strings, so if you’re in the mood for a moving tale, I think you’re in the right place. Not sure? Let’s see if we can change that as we welcome our title in the spotlight and dive between the pages with a special excerpt to tantalize and tease! Today’s ebook of choice is...

A Kingswater Summer
by
Jo Lambert
About the book...
KIERA
Newly returned from backpacking around Europe, Kiera Merrick has landed a dream job - working for actress Stella Wynter, helping set up a memory room at Penmarra, her beautiful riverside home just outside Kingswater.
JAKE
Jake Paterson is currently staying with Stella after filming the final series of his popular TV drama. He is trying to work out how to get his co-star and long-term girlfriend Rachel Tyler back after she walked out on him. But Jake soon finds himself drawn to Kiera, developing feelings for her that have no place in his life. He realises painful choices will eventually have to be made. And someone is going to get hurt.
TOM
Stella’s godson, hapless Tom Armytage is also staying at Penmarra along with girlfriend Chantal. He dreams of becoming a successful property developer and hopes Chantal’s dynamic presence will boost his ambitions. To impress her he boasts that he is heir to all of Stella’s wealth.
CHANTAL
Chantal Porter is a woman used to getting her own way. Tom is her ideal partner; weak and easily manipulated. Listening to him talk about his inheritance, she likes the idea of being Penmarra’s next mistress. But Stella and Jake’s close relationship gives her cause for concern. Who is he? And could he be a threat to her future ambitions?
As Jake comes to a difficult decision and sets off for London to sort things out with Rachel, a heart broken Kiera is left to watch helplessly as Chantal puts in place a plan to secure Tom’s inheritance. One that will change Stella’s life for ever.
Set on the south coast of Cornwall, A Kingswater Summer is a story of love, deception, and family secrets…
AMAZON US | UK
~~~~~~~~~~~~~~~~~~~~~~~~~~~~~~~~~~~~~~
~~~   EXCERPT   ~~~

After his brush with Kiera Merrick, actor Jake Paterson, who owns the four star Leigh Park Hotel where Ava’s hen do is taking place, heads for the club and orders a drink, only to find himself embroiled in another confrontation.

Moving away from the bar, Jake found a table tucked away in a quiet corner and sat down, still brooding on his situation. He watched the dancers; people enjoying themselves, their cares forgotten for the moment. About to take another mouthful of whisky, he was aware of someone standing on the other side of the table, and looked up to see a round-faced, overweight balding man pull out a chair and join him.

‘Thought it was you.’ Once seated, the man laced his fingers and leaned across the table, smiling. ‘I wondered if you had any comment to make, Mr Paterson.’

‘Jeff Howard from the Daily Bugle.’

‘I’ve nothing to say. Go away,’ he said, his mood souring at the sight of this smug, greasy looking man.

‘I’m a local reporter. Wondered what you were doing here, that’s all. Need to keep our readers up to speed. Can we expect a new series of Coast Watchers? I know officially the series has finished but, if a new series is being commissioned, it would be good to have the local paper get an exclusive. Ms Tyler anywhere around?’ He turned, sharp eyes scanning the dance floor before turning back to face Jake. ‘Where you go, she goes. Or has something happened between you two love birds?’

‘I’ve no idea what you mean,’ Jake snapped. He was used to being in the public eye and usually had a good rapport with the press. Tonight, however, it felt like an intrusion. In fact, this grubby, overweight little man whose body seemed to be trying to burst out of his clothes, was totally out of order.

Jake stood up very slowly and picked up his glass. ‘No comment,’ he muttered and began to walk away. He needed to find somewhere quiet; somewhere out of the way where he could finish off his drink without interruption. He had only managed a few steps when a hand grabbed his arm and tried to spin him around.

‘No need to be like that,’ Howard said, as they knocked into a table. The glass Jake was holding tilted, spilling whisky onto the floor.

Jake wanted to hit him. Not a good move in a room full of people, especially with the likelihood of a photographer lying in wait somewhere. He tried not to think of such a potential nightmare scenario.

‘I’ve nothing to say.’ Jake said trying to untangle himself, and then breathed a huge sigh as two large, dark-suited bouncers approached.

As the men grabbed them both and pulled them apart, the music stopped, and the lights went up. A murmur went around the room. Suddenly everyone seemed to be watching. ‘Brilliant,’ Jake sighed to himself. ‘Now I’m a public spectacle.’

‘This man’s being aggressive towards me,’ said Howard loudly, as the bouncers pulled them apart. ‘I demand…’

Another figure pushed through the crowd behind them and stood for a moment frowning.

‘Jake? What the hell are you doing here?’ he asked, before his gaze fixed on Howard. ‘Get him out of here,’ he ordered, threatening to report him to his editor as they took him away. 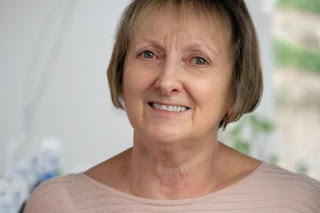 Jo Lambert lives on the eastern edge of the city of Bath. She is a member of the Romantic Novelists Association and the Society of Authors. She has been writing since 2008. Her first five books, a set of linked romantic sagas following the lives of several families in rural West Somerset, were followed in 2015 by Summer Moved On, a contemporary romance set in South Devon. A sequel, Watercolours in the Rain was published 2017,
In June 2018 Jo signed to Choc Lit and her debut A Cornish Affair, set in North Cornwall was published in 2019 under their Ruby Fiction imprint.
Her latest novel A Kingswater Summer is the second of a three-book series. The first, Shadows on the Water, was published in 2020. Both books can be read as standalone stories.
When she isn't writing she reads and reviews. She also has an active blog. Jo loves travel, red wine and music and long as it has a great melody and lyrics. Oh, and she often takes the odd photograph or two…
SITE | BLOG | TWITTER | FACEBOOK | LINKEDIN | INSTAGRAM
~~~~~~~~~~~~~~~~~~~~~~~~~~~~~~~~~~~ 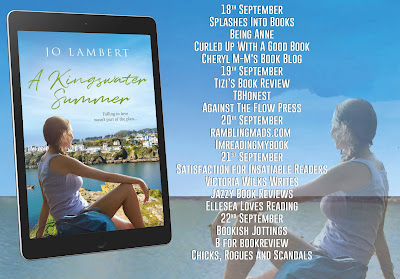 Many thanks for being part of the tour Gina