Today, we're setting our sites on another title currently touring with Rachel's Random Resources, all about second chances and how looks can be deceiving. Curiosity peaked? Great! So, you'll LOVE today's post because we've not only got a SPOTLIGHT, but a special EXCERPT for you to feast your eyes on. Without further adieu, let's get this bookish party started as we welcome today's title in the spotlight... 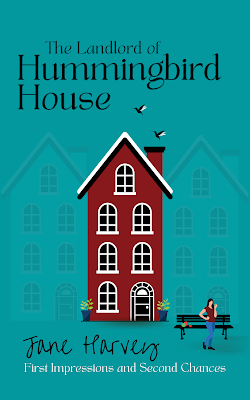 The Landlord of Hummingbird House
by
Jane Harvey
About the book...
When April moves into Hummingbird House, she is intrigued by her mysterious landlord, Dai.
With a bruised heart and a distinct lack of furniture, she spends the summer getting to know the other occupants. As she smartens up her home and makes peace with her recent past, she befriends Paul, a solitary ex-chef, and Betty, an elderly lady who lives in the basement flat.
But Hummingbird House holds many secrets, and the relationships of the tenants are not as straightforward as they seem. April learns some shocking truths one eventful night, and realises that victims and villains can look the same.
The Landlord of Hummingbird House is a contemporary novel exploring unlikely friendships, unexpected love interests, and family relationships. Here, everyone is in need of a second chance - and appearances can be deceptive.
AMAZON UK | US
~~~~~~~~~~~~~~~~~~~~~~~~~~~~~~~~~~~~~~~~~~~~~
~~~ EXCERPT ~~~
This scene takes place early in the novel and is part of April’s first – awkward – encounter with Dai (who she assumes is the landlord). She has been looking for a new flat following the end of a serious relationship. She has rented the flat without ever viewing it, simply from the Letting Agent’s photos, because she has found it so difficult to find a new home. Dai has met her outside the house and taken her inside.
She followed him in. The hall was neat and clean but simple; the floor carpeted in a neutral beige. Absently, she wondered if there were still tiles, beneath it.
“Post,” he gestured to a shelf of cubby holes numbered from ‘Basement’ to ‘Four’. Then he was off again.
“You’re on the next floor. Number three.”
“Yes,” she said, nervous of saying something foolish again. Best keep it brief.
The key was already in the keyhole when they reached the flat. He had pounded ahead of her, hopping up the stairs adeptly. He stood still, waiting for her to draw near, and she found herself a little too close, trapped as they were in the narrow corridor once she caught up with him. There was a pause. She could feel the warmth of him, nearby. Hear him breathing. She looked up, and he was staring at her – those sharp, blue eyes under a furrowed brow. What was happening?
He leant forward, even closer, and lifted his right arm up a little. She could see the tendons flexing in his forearm, fluctuating, and rippling like the strings of a grand piano. She noted how large his hands were. She wondered if he was about to touch her face.
He tapped gently on the door with the index finger of one hand.
“After you,” he said.
He was expecting her to let them in. Into her flat. There was that foolishness again. She blushed.
“Right-o!” she said. Where had this new phrase appeared from?
The door was light and opened straight into the apartment, which was exactly as it had appeared in the pictures. Thank God.
So, this was it. Her new home. Hummingbird House.
~~~~~~~~~~~~~~~~~~~~~~~~~~~~~~~~~~~~~~~~~~~~~~
About the author...
Jane Harvey is a pen name (shhh). She crafts fun fiction for the thinking woman, where she enjoys exploring unexpected friendships and writing happy endings. This is lucky, because in real life her (prize-winning) fiction is a little bleaker. She was born and raised on the island of Jersey, and lives with two males and a dog. She owns an admirable collection of animal vases and unusual lighting.
FACEBOOK | INSTAGRAM | TWITTER
~~~~~~~~~~~~~~~~~~~~~~~~~~~~~~~ 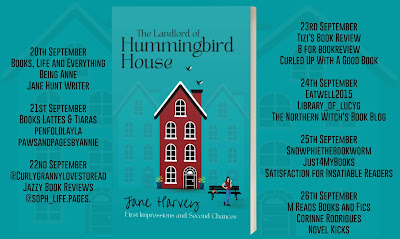