RRR presents... A LEAP OF FAITH AT THE VINEYARD IN ALSACE by Julie Stock - EXCERPT + GIVEAWAY!

Today, we're exploring a new title currently on tour with Rachel's Random Resources! We've got the spotlight ready to shine and a special EXCERPT just waiting for you to devour, so, if you're ready, KEEP READING for some bookish fun and then some! 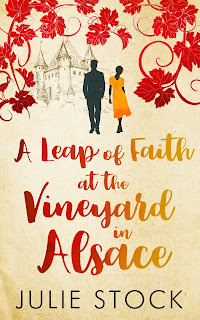 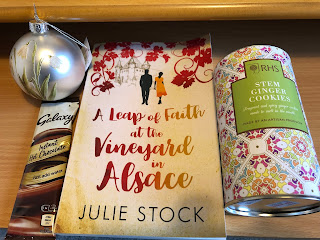 ...a signed copy of A Leap of Faith at the Vineyard in Alsace
plus some festive goodies!
(Open to UK Only)
Prize contains the following:
a signed paperback copy of A Leap of Faith at the Vineyard in Alsace
a sachet of Galaxy instant hot chocolate
a tin of RHS stem ginger cookies
a RHS Christmas bauble with a snowdrop decoration on it.
*Terms and Conditions –UK entries welcome. Please enter using the Rafflecopter box below. The winner will be selected at random via Rafflecopter from all valid entries and will be notified by Twitter and/or email. If no response is received within 7 days then Rachel’s Random Resources reserves the right to select an alternative winner. Open to all entrants aged 18 or over. Any personal data given as part of the competition entry is used for this purpose only and will not be shared with third parties, with the exception of the winners’ information. This will passed to the giveaway organiser and used only for fulfilment of the prize, after which time Rachel’s Random Resources will delete the data. I am not responsible for despatch or delivery of the prize.
a Rafflecopter giveaway
~~~~~~~~~~~~~~~~~~~~~~~~~~~~~~~~~~~

Special thanks to Rachel at Rachel's Random Resources for the chance to bring this tour to you as well as the excerpt to share. (THANKS!) For more information on this title, the author, this tour, or those on the horizon, feel free to click through the links provided above. This title is available now, so click on over to your favorite online retailer to snag your copy today! Be sure to check out the rest of the tour for more bookish fun. 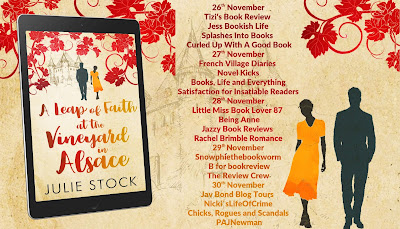 Thanks so much for hosting me on your blog today, Gina. I really appreciate it!