Hi guys!
Welcome back to the site that aims to please, Satisfaction for Insatiable Readers!

As promised, we're back immediately with another tour making its way through the blogosphere with Rachel's Random Resources, and this one just so happens to feature one of my FAVORITE Historical Fiction authors. Yep! That's right! None other than Virginia Heath has released yet another title, TODAY in fact, and I couldn't be happier to be a part of the celebration. So, gather your wits, and put on your bonnet, we're going for a ride between the epages of today's second blog tour guest, and ebook of choice... 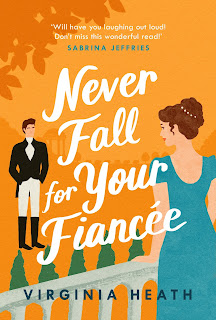 Never Fall for Your Fiancée
by
Virginia Heath
About the book...
The trouble with lies is they have a tendency to catch a man out.
The last thing Hugh Standish, Earl of Fareham, wants is a wife.
But since the only way to keep his mother’s matchmaking ways at bay is the promise of
impending nuptials, Hugh takes the most logical action: he invents a fake fiancée.
It’s the perfect plan – until Hugh learns that his mother is on a ship bound for England to meet his ‘beloved’. He needs a solution fast, and when he collides with a mysterious beauty, he might just have found the answer to his prayers.
Minerva Merriwell is desperate for money to support her sisters, and although she knows that posing as the Earl’s fiancée might seem nonsensical, it’s just too good an offer to refuse.
As the Merriwells descend upon Hugh’s estate, the household is thrown into turmoil as everyone tries to keep their tangled stories straight. And with Hugh and Minerva’s romantic ruse turning into the real thing, is true love just one complication too many?
GRAB YOUR COPY TODAY
~~~~~~~~~~~~~~~~~~~~~~~~~~~~~~~~~~~~~
Oh my stars, this book was such a delight!
I enjoyed getting to know the Merriwells, one and all. Even when I thought I might lash out at young Vee, heaven forbid the poor chit play along to help her family...at least the ones that are there for her, unlike the curr that left them to fend for themselves. Even when I wanted Diana to put a sock in it with her accusations, and suspicions because clearly there were other things at stake and quite frankly there was a romantic possibility covered in biscuit crumbs that she could have been considering even while she let her tongue fly. Even when I fell into despair thinking that Minerva would back out of it all before it ever began, and who could really blame her with that spirited conversation she had with none other than the Earl. I just knew that they were going to be a family to remember, and boy did they prove me right over and over again!
My favorite part, outside of the outrageous, and ever growing elaborate lie, or should I say performance, itself was when Hugh was teaching Minerva to dance. She has two left feet, if ever one had them, and was point blank in stating as much. Hugh, however, was intent on getting through to her, and making her smile again, but that's a story for you to discover, so when push came to shove, he found a way. It was something small, yet endearing, and the joy it brings to both of them, simply makes you let loose a contented sigh. Of course, there are many other wonderful passages, exchanges, and moments to remember, but this one definitely sits on high for me. Curious to hear from other readers what their favorite part was too!
All in all, another wonderful release from an author that never fails to amaze me with her talent for creating characters to love, and stories to remember. I love that I can pick up any of her works, and get not only a well written story, but humor, wit, romance, strong female leads, and dashing potential heroes to be. Historical Fiction fans, if you haven't made her acquaintance yet, I suggest you do post haste!
~~~~~~~~~~~~~~~~~~~~~~~~~~~~~~~~~~~~~
About the author...

When Virginia Heath was a little girl it took her ages to fall asleep, so she made up stories in her head to help pass the time while she was staring at the ceiling. As she got older, the stories became more complicated, sometimes taking weeks to get to the happy ending. Then one day, she decided to embrace the insomnia and start writing them down. Twenty books and two Romantic Novel of the Year Award nominations later, and it still takes her forever to fall asleep.
FACEBOOK | TWITTER  |  INSTAGRAM
~~~~~~~~~~~~~~~~~~~~~~~~~~~~~

YOUR CHANCE TO WIN...
(1) of 2 e-copies of Never Fall for Your Fiancée by Virginia Heath!
(Open INT)
*Terms and Conditions –Worldwide entries welcome.  Please enter using the Rafflecopter box below.  The winner will be selected at random via Rafflecopter from all valid entries and will be notified by Twitter and/or email. If no response is received within 7 days then Rachel’s Random Resources reserves the right to select an alternative winner. Open to all entrants aged 18 or over.  Any personal data given as part of the competition entry is used for this purpose only and will not be shared with third parties, with the exception of the winners’ information. This will passed to the giveaway organiser and used only for fulfilment of the prize, after which time Rachel’s Random Resources will delete the data.  I am not responsible for despatch or delivery of the prize.
a Rafflecopter giveaway
~~~~~~~~~~~~~~~~~~~~~~~~~~~~~~~~~~~~~~~~~ 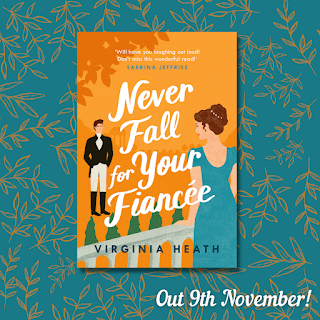 Until next time, remember...if it looks good, READ IT!
Posted by Gina at 1:38 AM