Hi guys!
Welcome back to the site that aims to bring you the best in bookish delights every day of the week...Satisfaction for Insatiable Readers. 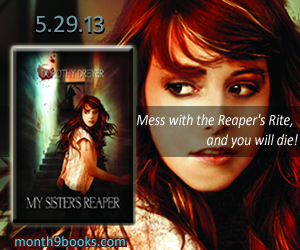 Today is an extra special day indeed as I get to play host to a blog tour via Month9Books starring none other than newly minted author Dorothy Dreyer! Don't know the name? Well, some of you might have met her at BEA this year, and others might have seen previous stops on this tour...as for me I was introduced my another bloggy friend to her and her work a few years ago.  That's right! I featured a review of that unpublished work right here on my site way back when and even then, she was something to read.  So needless to say when I heard she reached published status with a NEW story...I had to be a part of the celebration!  Without further ado, please join me in welcoming a fab friend, writer extraordinaire and today's ebook of choice... 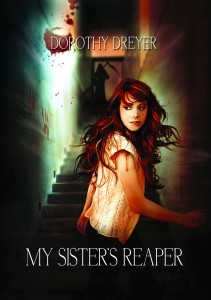 MY SISTER'S REAPER
by
Dorothy Dreyer


There’s bragging, there’s trying to impress a boy, and then there’s Sixteen-year-old Zadie. Zadie’s first mistake was telling the boy she’s crushing on that she could bring her dead sister back to life. Her second mistake? Actually doing it! When Zadie accidentally messes with the Reaper’s Rite that should have claimed her sister Mara, things go horribly wrong (you think?). Mara isn’t the same anymore—Zadie isn’t even sure she’s completely human, and to top it off, a Reaper is determined to collect Mara’s soul no matter what. Now Zadie must figure out how to defeat her sister’s Reaper, intent on claiming both girls, or let Mara die … this time for good.


A story of imagination, wonders and a whole lotta shake-worthy situations, this one will leave you bookishly satisfied yet thirsty for more....much like a Reaper only with less insidious intentions. ^-^

Zadie is a joy to get to know and though the questions and guilt she's dealing with are weighty, she takes 'em like a champ.  I mean, it's hard enough being sixteen without having a sister in a coma that ended up there under mysterious circumstances, and powers that may-or-may-not exist to perhaps-in-some-small-way put everything back together again.  I'd like to see YOU deal with that short of pressure with simply a smile and a nod. Uh-huh. That's what I thought. Anywho...like I said, a joy tp get to know and despite all that's been thrown at her recently, still a girl with a good head on her shoulders. Now, about that magic...

It's real, yes, but the why, how, and use of it is a unique mix up of heritage, magically speaking, that I've yet to see.  Shan't spoil it for you, but it leads to some unusual family tree discoveries for all involved parties. I really like how the author managed to get into all of that without getting TOO heavy on the history.   She opens the door, invites us inside but doesn't go all "Hotel California" like some do.  You know what I mean, those reads where you practically need an added guide just to keep track of the lineage and what not. More power to those that prefer that style but I'll take my reads light on the "four score" and heavy on the story.  Moving forward...

What a story indeed! As stated, magic abounds in many forms both good and not-so-good and while that would certainly keep things interesting enough, the characters truly give it that extra dose of charm.  Madie, Zadie's sister, is a force to be reckoned with ...even if her hand isn't always her own (dun dun dunnn). You can tell underneath it all she's a peach, but it's getting past all that that takes true courage. Why? You'll see. *-* Moving forward, we have Naomi, a best friend certainly worth her BF title; Gavin, the crush that could be something more; Emily who, well she doesn't REALLY play in the same circles but she definitely has a somewhat star role in the story. ..while it lasts. *ahem* On the unexpected friendly list, we would be remiss to forget about the Black's...Lilhura and Chase. It's a great reminder to not judge a book by its cover, nor a person entirely by your first impression of them...the rest you'll have to uncover on your own.


In conclusion, a fantastic read from ecover to ecover from a talented writer that knows how to place you in the action, envelop you in the story and make you a part of the family so that their triumphs are yours...as well as their tragedies.  If you like your reads on the Middle Grade/Young Adult side of things with magic, mystery, danger and a chance at romance...this is definitely one to have on your MUST READ list.

Ebook for review courtesy of Brooke at Month9Books.  (THANKS!)  For more information on this title as well as their full catalog, be sure to stop by their official site, like them on Facebook, Pin them on Pinterest, or follow along on Twitter!  To discover more about the author behind the work, catch Dorothy Dreyer online at her site, her blog We Do Write ( a fab site if I do say so myself), on Facebook and over on Twitter.  This being a blog tour and all, there is more fun where that came from!  Be sure to catch Ms. Dreyer as she stops over at my good friend Nayuleska's site, Nayu's Reading Corner, tomorrow!


Now, how would you like a chance to WIN?  I thought you might.  Thanks to the folks at Month9Books, now's your chance!  Up for grabs....signed copy of MY SISTER'S REAPER, nail polish, journal, MSR keychain, and candy! How's that for a great combination?  To enter....check out the rafflecopter below!

I just thought you should know that your posts are always fabulous! I love having you on our blog tours :-)

Brooke: Thanks, Brooke! Always a pleasure...and the kind words definitely made my day. ^_^ Thoroughly enjoyed Ms. Dreyer's book....can't wait for the world to discover it as well!

Thank you so much for taking the time to read and review my book. You're awesomesauce! ♥

Mmm, this sounds like one I'd enjoy. :) Thank you!