Welcome back to the place that aims to please the reader in you no matter what your pleasure...Satisfaction for Insatiable Readers.

Still trying to chase the blues away, will be for awhile I'm certain as well as ignore my current status this morning (as in training my FT replacement...don't ask), but books are a great mind escape from life sometimes, you know? Take today's choice for example. It's a recently released Children's Fiction title that will have you in stitches...and a little fearful for our lead character's life after plant boy puts a hex on him! But I digress, let's properly greet today's book of choice lest the same fate befalls us.... 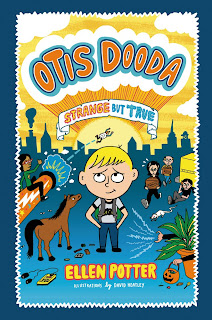 
Otis Dooda.
Some name, right?
Even HE invites you to get it out of your system before continuing to follow him on his adventure. Perhaps it's the age difference but my mind didn't run away with the poo jokes that apparantly he's heard all his life. I went to the "oh-the-doo-da-day" song snippet from something my mind recalled from childhood....anyone know the song? Can't quite recall, but the refrain was stuck in my head the moment I read this little guy's name. Anywho...


Otis is a fun fellow. Fairly smart, enchanted with his family's new home (New York City...woo-hoo!) and desperately trying to avoid the attention of his older brother who has some fairly gross habits (as does his girlfriend) that I shan't reveal just in case you're eating lunch or something while reading this. ~shudders~ Kids, I know but really...eww! Moving forward...along with the change in scenary comes a change in friends or at least those immediately available to him. Of the colorful cast we meet from the know-it-all door man (who's actually pretty cool, considering) to the gent with the barky dogs, the elderly neighbor with a glare to stop clocks to the writer of the hall newsletter...that's right, a hallway posted newsletter...that knows EVERYTHING that happens somehow or another and puts it in print for the building to see...it's quite a display. That's not even counting the new kiddo type friends he "inherits" from the current building tenants that score him some serious cool points. No, really! Cat is phenomenol and even their parents are pretty fab (anyone want to fly into a vat of marshmallow fluff...or perhaps play with a dog that's not-a-dog....exactly? ^_^) which certainly makes his transition smoother. The biggest hang up is plant boy.


Sound sinister? It's even more so when you consider that EVERYBODY In the building pretty much pays him off in some way or another by plopping a "donation" by his planter. Yes, you read that right, his planter. He sits buried in a plant by the first floor elevator and if you don't pay up...you my friend are in for a curse. *-* What's a newbie to do? Well, according to his wishes, give up the awesome little lie detector that you built out of legos and imagination but Otis is having none of it. Taking the high road, he scoffs at the demand as well as the "sentence" given out as his doom. Shan't be spoiling the inevitable end he will meet but lets say from the sound of it, its gonna be painful. *gulp* Maybe that lie detector WOULD have been worth the trade. ~whistles~


In the end, this isn't simply a story about a pushy plant guy, moving to a new area, or dealing with siblings that you'd rather see attacked by rabid bunnies than spend an afternoon with. It's about how the one thing in life that is constant is change; it's how we deal with it that makes the final outcome pleasant or something else altogether. Otis doesn't give up just because of the obstacles plant guy places in his path. He strives to make an impact in his new environment by making friends, enjoying life (even if they are his final days..dun dun dunnnn) and bucking the bad juju that's been sent his way. It's a smile a minute with a little worry to spare but a fun read nonetheless that will break up your doo-da day (sorry, couldn't resist!) no matter which way you slice it.

ARC for review courtesy of Ksenia at MacMillan Children's Publishing Group. (THANKS!) For more information on this title as well as their complete and growing catalog, be sure to stop by their official website, like them on Facebook, stalk them on Twitter, or check out the feeds from some of the characters! Both Otis AND Cat are on Twitter and there is an official book site as well to continue the fun!  This book is available now via Feiwel & Friends so be on the lookout for it on a bookstore shelf near you.

Hmm, not a book that appeals to me but as you said maybes it is an age thing.